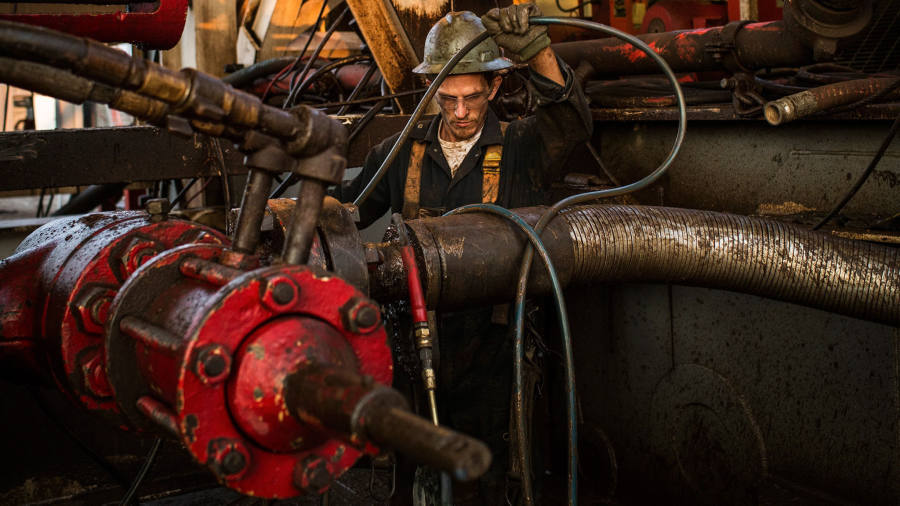 The sharp drop in the oil price since the coronavirus outbreak has left US shale producers hanging on for survival, and dependent on their big rivals in Opec to come to their rescue.

US producers do not have a seat at the Opec table, but would cheer if the cartel — due to meet in Vienna this week — decided to deepen output cuts to prop up the oil price. Saudi Arabia, the dominant member of the group, is said to be pushing to remove at least another 1m barrels of production a day.

A lot of cash-strapped US producers are at risk of bankruptcy if Opec goes the other way and decides to fight another battle for market share by keeping the taps flowing.

“If I were in their position I wouldn’t be cutting more,” said Doug King, London-based chairman of RCMA Capital’s Merchant Commodity Fund. “I’d sit it out and watch what happens.”

Analysts say US shale production is likely to grow comparatively modestly this year, if at all, which would mark a big change. Last year, output leapt by more than 1.2m barrels a day to a record high of 12.2m b/d, according to the Energy Information Administration, a division of the US Department of Energy.

But however significant all this has been for America’s strategic and economic interests, investors have not been so enthused.

US producers absorbed $400bn of capital between 2008 and 2018 without returning much of it, said Artem Abramov, head of shale research at Rystad, a consultancy. Wall Street has now closed off the capital pipeline, tired of funding a business model that is better at pumping oil than profits. If crude prices — down more than 20 per cent since the turn of the year — stay subdued, casualties could emerge.

Or they will, unless Opec steps in.

“The whole industry’s investment case is predicated on Opec voluntarily ceding market share,” said Matt Portillo, a managing director at Tudor, Pickering, Holt & Co, a Houston-based investment bank. He noted that a cut to support prices would bolster US producers at a point of maximum vulnerability.

“[West Texas Intermediate] at $50 a barrel does not work for US shale,” he said, referring to the US benchmark currently trading at just over $48.

But the other option is also tricky for Opec. The last time the cartel tried to take on America’s shale patch, things ended badly.

The last Opec onslaught began with the “Thanksgiving Massacre” of November 2014, so named because the Opec meeting fell on the day of the US holiday. Saudi Arabia announced an end to market intervention, deliberately allowing prices to drift lower to force rivals out of business.

Two years of oil-industry austerity and producer-country fiscal pain ensued. By the time Saudi Arabia threw in the towel, US production had fallen by 1m b/d from its peak, to about 8.5m b/d. Shale producers emerged leaner and fitter — and capitalised on the oil-price rally that followed Saudi Arabia’s reversion to the swing-producer role. Output rose in the years after by almost 50 per cent.

“Without another cut this week, it will be an even worse crisis for shale than in 2015-16,” said Christian Larochelle, an independent Boston-based analyst, especially given shale producers’ need to keep spending and drilling just to hold output steady.

Cutting back on drilling does not help much, because more wells are constantly needed to offset fast-falling output from existing wells. So less drilling just “reduces future cash flows at a time when the capital markets are increasingly restrictive,” he added.

Key to the industry’s resilience in 2015-16 was its ability to slash costs. Producers moved into the most prolific acreage, picked the choicest wells, and honed efficiencies of scale and drilling techniques. Wall Street also stood by the sector, tiding it over until the Opec-engineered price recovery took hold.

But these days, neither the cheap credit nor the easy cost-savings are available.

“What you don’t have now that you did have last time is an industry suboptimally producing shale,” said Mr Portillo. “The capital markets are closed and productivity is plateauing.”

Moody’s, the rating agency, noted last month that more than 60 per cent of the $86bn worth of shale debt coming due over the next four years was issued by junk-rated companies, implying a “higher degree of default risk for the industry”.

A string of corporate collapses in the shale patch would deepen investors’ distrust, worsening the funding problem, but it might not dent production significantly. Much current US output comes from companies that went bankrupt last time around, but which restructured with cheap capital under US Chapter 11 rules.

And Opec would have to stick with the plan this time to keep producers in the US beaten back. Even with WTI at $40 a barrel, it will “take months to make a difference to supply,” said Mr Abramov.