CBS Courts Advertisers Virtually, With a Zinger From Stephen Colbert 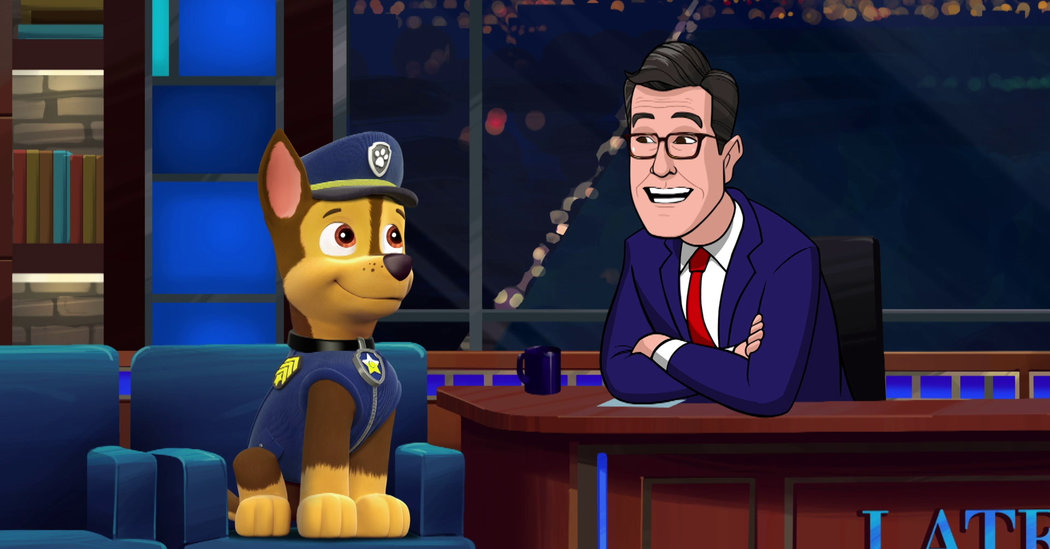 Every spring CBS parades its stars and executives across the Carnegie Hall stage to try to persuade advertisers to buy commercial time during an event filled with scripted banter and sizzle reels. This year, ad buyers working from home clicked on a link that led them to a cartoon of Stephen Colbert interviewing a dog.

The cameo appearances by a character from Nickelodeon’s “Paw Patrol” and an animated version of the star of “The Late Show” kicked off a toned-down presentation from ViacomCBS that took the place of the usual showcase.

In a series of videos delivered to an audience stuck at home during the coronavirus pandemic, actors like Thomas Middleditch and Tom Selleck helped CBS introduce its 2020-21 fall lineup. The slate includes 23 returning series, as well as a new sitcom called “B Positive” from Chuck Lorre, the co-creator of the CBS stalwart “The Big Bang Theory,” and a reboot of the 1980s vigilante show “The Equalizer,” starring Queen Latifah. “Clarice,” a TV sequel to the 1991 blockbuster “The Silence of the Lambs,” will arrive late in the season. The network will also broadcast the Super Bowl on Feb. 7.

In taped videos, Mr. Colbert joined Tony Romo, LL Cool J and others to talk up the media giant’s ad-targeting technology and its access to young viewers. James Corden, the host of “The Late Late Show,” reminisced about taking selfies and eating frozen yogurt during the parties at the Plaza that take place after the annual Carnegie Hall event.

“I so wish we were all together right now in New York City,” he moaned.

The pandemic has laid waste to the elaborate springtime ritual known as the upfronts, where media companies hype their fall wares in an effort to secure their slice of more than $9 billion in ad money. This year, boozy dinners and power breakfasts have given way to virtual presentations.

With television production shut down indefinitely, the companies that buy commercial time are expected to spend 33 percent less than they did last year during the current upfront season, according to a recent survey from the advertising data company Advertiser Perceptions.

“The reality is, we’re trying to figure out what’s happening,” said Gibbs Haljun, who handles investments at the media agency Mindshare. “Nobody is pushing to have upfront conversations today — there are too many variables we don’t know.”

In its most recent quarter, ViacomCBS suffered a 19 percent slump in advertising revenue. During a virtual meeting of shareholders on Monday, the chief executive Robert M. Bakish said the company was seeing “green shoots” in the so-called scatter market, where ads are sold closer to airtime, rather than months in advance.

Neither he nor George Cheeks, the head of CBS, appeared in the videos sent to ad buyers, but Mr. Colbert managed to squeeze in some industry humor at their expense.

“If your cheeks seem bakish, see a physician immediately,” he said to his remote audience. “That’s one of the symptoms.”