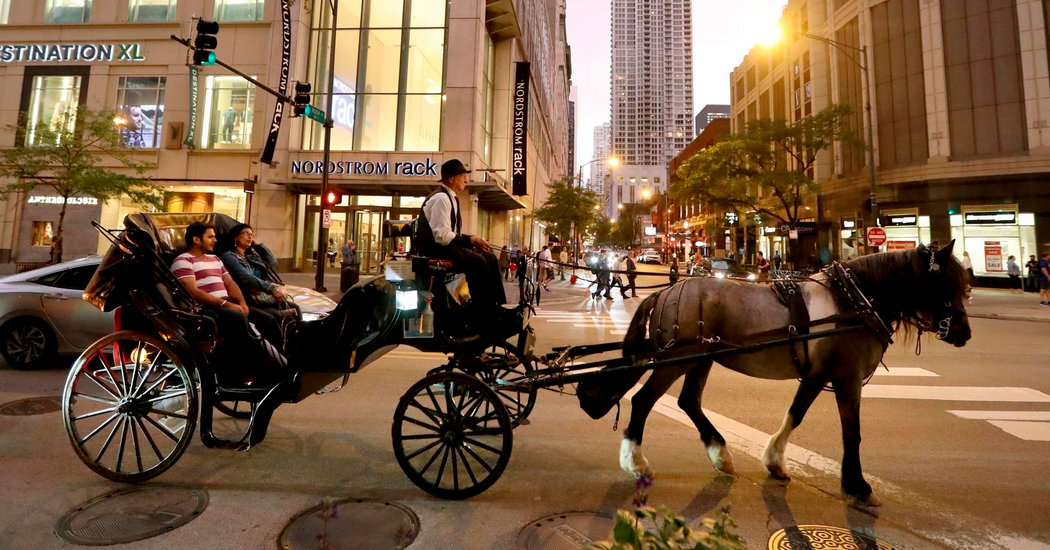 The steady sounds of clip-clopping hooves pulling creaking carriages will be absent from the streets in Chicago starting next year after the City Council on Friday voted to ban horse-drawn carriages.

Under the ordinance, which is effective Jan. 1, 2021, operators will be unable to renew their licenses, and the city will stop issuing new ones.

The horse-drawn carriage industry has been shrinking for years. The city now has 10 carriage licenses that will expire at the end of the year, The Chicago Tribune reported. At one point, it had 60 licenses available, according to The Associated Press.

Chicago joins a handful of other cities that have already banned horse-drawn carriages, including: Salt Lake City; Biloxi, Miss.; Camden, N.J., as well as Key West, Palm Beach, Pompano Beach and Treasure Island, Fla., according to People for the Ethical Treatment of Animals. In Montreal, horse-drawn carriages were prohibited starting on Jan. 1, 2020.

For years, animal rights activists have called the carriage-horse industry abusive and cruel but supporters have argued that the horses are treated humanely and the carriages are a romantic link to history, provide jobs and appeal to tourists.

According to Chicago city regulations, no horse-drawn carriage can carry more than seven passengers, and the horses must be kept off the streets when temperatures reach either 15 degrees or lower, or 90 degrees or higher.

Dr. Dennis French, a veterinarian, professor at the University of Illinois College of Veterinary Medicine and vice president of the Horsemen’s Council of Illinois, addressed the City Council on Friday to speak out against the ordinance. He said claims of animals mistreatment and insufficient care were unfounded.

“Representatives of the Horsemen’s Council have repeatedly inspected these horses, the harnesses that are used on them and the stables where they are kept, and we have found no causes for concern,” Dr. French said. “These horses are well cared for, healthy and they like to work.”

But Kitty Block, the president and chief executive of the Humane Society of the United States, welcomed the city’s move as a step to help protect the horses.

“These animals suffer due to harsh working conditions, often experiencing chronic medical problems, including respiratory ailments and lameness, which are exacerbated by standing on hard surfaces for long periods and forced to pull overloaded carriages,” Ms. Block said in a statement.

Ingrid Newkirk, the president of PETA, said Friday was a banner day for the horses in Chicago, who will no longer pound the pavement through extreme heat, thunderstorms and blizzards.

“PETA and the Chicago Alliance for Animals have supported this progressive ban every step of the way, and we have high hopes that this kinder, carriage-free city will influence others to follow suit,” she said in a statement.

In New York last month, a 12-year-old carriage horse collapsed in Central Park and was euthanized hours later. The next day, Mayor Bill de Blasio said that the Police Department’s Animal Cruelty Investigation Squad was looking into the circumstances surrounding the episode. The status of that inquiry was not immediately available on Saturday.

Footage of the mare’s collapse and news of her death spread on social media, prompting an outcry online and a protest attended by dozens the following day.

“We’re wholeheartedly committed to protecting the welfare of carriage horses and have the record to match,” a spokeswoman for the mayor’s office said on Saturday.