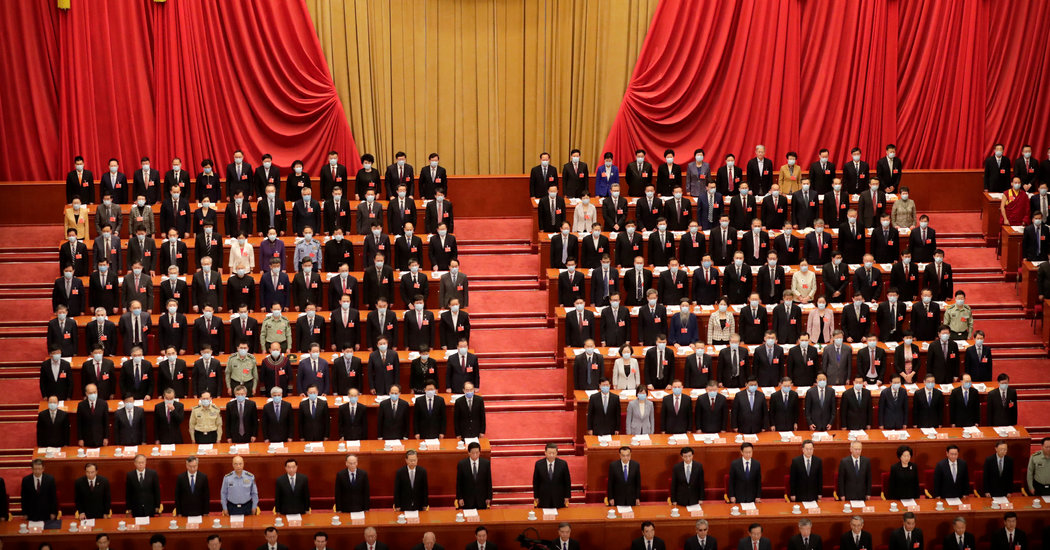 BEIJING — Parting with years of precedent, China abandoned its growth target for 2020, in an acknowledgment that restarting its economy after the coronavirus outbreak will be a slow and difficult process.

In his annual report to lawmakers meeting Friday in Beijing, Premier Li Keqiang said that the country has made major achievements in its response to the coronavirus epidemic and that economic development was a top priority. But he did not set a target for economic growth for the year.

“At present, the epidemic has not yet come to an end, while the tasks we face in promoting development are immense,” Mr. Li said. “We must redouble our efforts to minimize the losses resulting from the virus.”

Mr. Li’s work report, delivered at the opening of the annual meeting of the legislature, the National People’s Congress, also provided no details on Beijing’s plans to impose stringent new security legislation on Hong Kong in the coming months. China’s leadership disclosed those plans on Thursday night, and further details are scheduled for release after Mr. Li’s speech.

The two key policy moves at the congress — retreating from a once sacrosanct growth target while pressing an offensive to subdue the opposition in Hong Kong — suggested that even as China acknowledged the cost of the pandemic, the government is determined to show it will not be politically cowed by the crisis.

The annual congress, which usually convenes in early March for about two weeks, had been delayed and shortened to a week this year because of the coronavirus crisis. Even in ordinary times, the meeting is as much symbolism as substance — a party-controlled vehicle to acclaim and approve laws and budgets by nearly 3,000 delegates in neat rows under the vast ceiling of the Great Hall of the People.

This year, though, the symbolism matters more than usual. Xi Jinping, the top leader, has been trying to project confidence and absolute control as the government tries to revive the economy, restart schools and businesses and claim credit for largely ending the epidemic that spread from Wuhan in central China from late last year.

By this week, the coronavirus outbreak had infected more than 89,000 people in China, including over 4,600 who died from the virus. Delegates, most of whom were wearing masks, opened the session with a moment of silence for the victims of the outbreak.

The unusual arrangements for the congress meeting this year reflect continued worries that China has not totally contained the outbreak. Most journalists have practically no access to the Great Hall, where the congress meets, and must instead follow proceedings and join news conferences over video links.

Delegates have been required to undergo nucleic acid tests for the virus before they are even allowed to travel to Beijing. Hong Kong delegates were required to travel across the border to Shenzhen in mainland China so as to follow a standardized testing procedure.

On the agenda are proposals to improve the country’s disease surveillance system and hospitals, after the coronavirus outbreak exposed systematic failings. Investors are also looking to the meeting — which will approve a long-delayed budget for 2020 — to offer a clear sense of direction in the economy.

Mr. Li’s budget proposal calls for an economic stimulus program equal to about 2 percent of the country’s economic output last year. That is much smaller than the extra deficit spending being incurred in most industrialized countries.

China’s central government budget deficit was only around 3 percent last year. But the country is still struggling with a massive increase in debt incurred in 2009 during the global financial crisis and in 2016 during a currency and stock market crisis. That has made China’s leaders leery of borrowing a lot more money now to hand out checks to the public the way governments in the United States, Hong Kong and elsewhere have done.

Mr. Li announced instead a series of small measures that are likely to be popular but will have a modest cost.