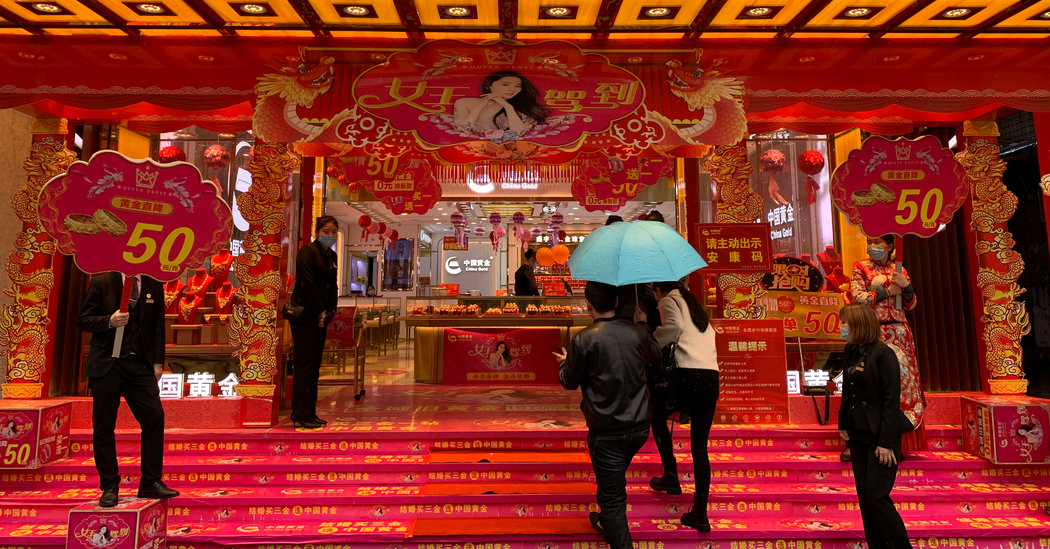 HEFEI, China — Once again, we were being followed.

The police officer broke up our interview with a construction worker. Then he scared off a shop worker who was opening up about the city’s strict lockdown.

Finally he went undercover. He pulled off his police jacket and skulked behind us through a mall in a black long-sleeved shirt. When I looked back, he would dive into stores. Once I caught him peeking from behind a clothing rack.

As a tail, he was cartoonishly obvious. But it didn’t matter. Each time my colleague and I tried to talk to someone, he found a way to scare the person off. For all the anti-foreign propaganda, intimidation and censorship in China, regular people are often willing to share their experiences. The man was there to make sure they didn’t.

We had come to Hefei, a middle-class city in central China, to chronicle the country’s emergence from its devastating battle against the coronavirus. Since the first outbreak in the city of Wuhan in January, the virus had prompted the Chinese government to close vast parts of the country, disrupting daily life and freezing major parts of its huge economic growth engine.

Hefei, we thought, would give us stories of joy and relief, as well as of the anxieties and wrinkles of returning to everyday life. Hefei’s people hold lessons for a world now grappling with some of the same problems, and their labor and spending could provide a badly needed growth spark.

Our undercover friend told us a different story. He showed us, once again, how the authorities stop at nothing to control the narrative coming out of China. His creeping presence was also a painful reminder that this trip would be my last in China for a while. At the end of the week, I had to leave the country, a part of an expulsion of the majority of reporters for The New York Times, The Wall Street Journal and The Washington Post.

The police officer blocked a tale of renewal. Signs of life in Hefei were everywhere. Traffic snarled the main roads at rush hour. The subways were at least half full, and the parks speckled with the elderly out for exercise.

Hefei offers a glimpse of real China. Similar to the many huge but anonymous cities of China’s eastern interior, it provides a more accurate portrait of regular Chinese life than one can find in the affluent megacities of Beijing and Shanghai, where most foreign correspondents live.

It is a city of eight million people and a provincial capital. It has worked to move past its traditional base of agriculture and manufacturing and nurture a technology-centric economy. Still, for all of its new office buildings and upscale residential towers, the city has a blue-collar edge.

On a pedestrian shopping street, people were out but shops were mostly empty. One jewelry store, China Gold, seemed particularly desperate for customers. Most members of its staff were out in front, bouncing with coordinated dance moves to booming pop. Some held up signs. Others dressed in elaborate red marital robes, invoking an instance when many Chinese families buy gold. For all their efforts, people just weren’t buying.

One employee invited us to the empty sales floor for a chat. He admitted that times had been tough since the business opened again. Plenty of people strolled by, but most were warding off cabin fever, he said, not looking to splash cash on a gold brooch.

“People are in the streets window-shopping, but no one’s buying anything,” he said.

It was as far as the interview got. Our man in black was back. Submitting to a temperature scan, he strolled to the back of the shop and had a word with the manager. Within minutes our willing interviewee was too busy to talk, and too scared to give a name — generally a requirement to use a person’s story or quotes.

For all the signs of returning normalcy, Hefei clearly had a long way to go. People seemed dazed and wary.

Partly, it was the virus. But another part was the oppressive tactics that kept people indoors. Neighbors were encouraged to report one another for breaking rules. Punishments were stiff.

On an elevator going up to eat dinner at a popular restaurant, Lady Luzhou, one woman muttered to her friend, “If work knew I was going out to dinner tonight, they’d kill me.”

Inside the restaurant, one man we approached was instantly concerned. When we explained we were media, he responded: “I’m not wearing a mask because I’m only on my way back from the bathroom. And when I’m eating, I also can’t wear a mask.”

After we assured him we weren’t accusing him, he admitted: “This is my first day out. The feeling is like I’ve been holding my breath for a long time.”

Still, during our visit signs pointed to life slowly returning. Malls guarded by men wielding temperature guns had a smattering of cautious shoppers.

Cafes and restaurants rearranged their interiors with an eye toward stopping viral contagion. Tables were pulled farther apart. Chairs faced a single direction.

Many of the eateries were filled with people. Some even ignored the seating patterns and sat face to face, chattering closely, as in the time before a breath might bring infection. At Lady Luzhou, drinking seemed heavier than it might normally be. Plenty puffed on cigarettes.

But we needed to talk to real people, and to do that we had to ditch the police. We wandered down an alley near the shopping street, doubled back and then doubled back again to see who was tailing us. The police officer now had a team of at least six others helping.

When they were on a smoking break, we jogged across a street just as the light was changing. They jaywalked across four lanes of traffic.

In the subway, when a conscientious guard stopped them for wearing their masks improperly, we jumped on a train. At the next station we jumped off as the doors were about to close. It was a small pleasure to watch half the team helplessly speeding away through the windows.

We hopped into a car we had ordered online. One of our tails wrote down the license plate. Within minutes, the driver received a call. He quietly listed the route he was taking.

The wariness that motivated the police to follow us seemed to extend to regular residents as well. With the virus apparently tamed in China and raging in the world, propaganda and online rumors alike have sought to find scapegoats overseas. State media has warned of foreign cases coming into China, without clarifying that many are Chinese people returning to the country. That has created alarming levels of xenophobia. The fears are a fresh layer on top of China’s new nationalism, carefully incubated by the state, which carries with it a ragged distrust of and anger at outsiders.

One reason we had come to Hefei was that it was one of the few cities with a hotel that would accept foreigners. In most places, even American chains like Marriotts and Hiltons said no foreigners allowed.

Having a quick meal at a half-filled McDonald’s before heading for the train station, my colleague and I were quietly talking when a young man wearing a bright yellow hoodie approached. He pointed at me. “You foreign trash,” he said. “Foreign trash! What are you doing in my country? And you, with him, you bitch.”

He hovered over us menacingly for a few minutes before moving on. His tirade, and the fact that no one in the restaurant said a word, felt bleakly appropriate.

As sad as I am to leave, people like him aren’t sad to see me go.