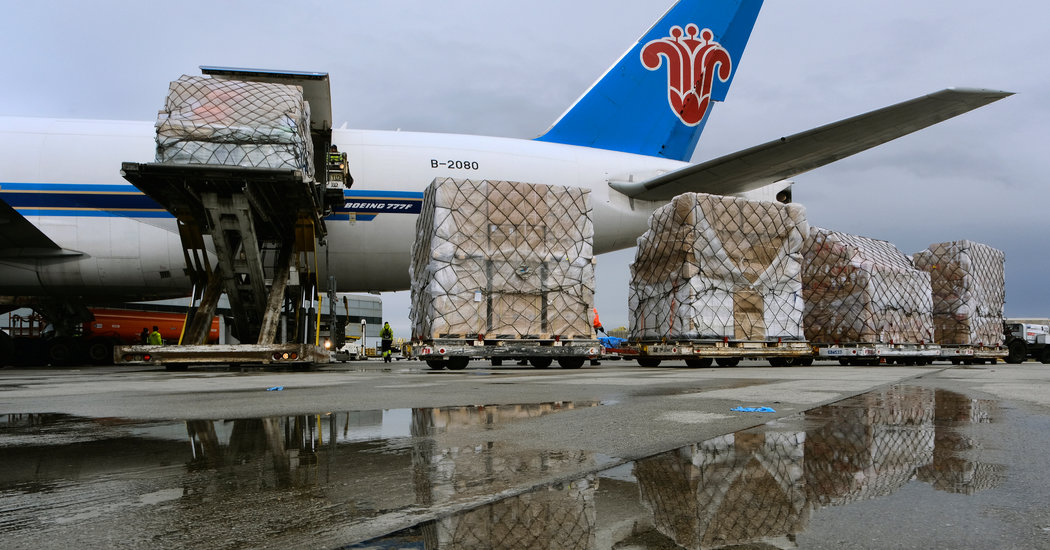 HONG KONG — U.S. hospitals and state officials face desperate shortages of the masks, ventilators and other gear they need to fight the coronavirus. Chinese factories can make it and sell it to them, but huge obstacles stand in the way — and Washington’s stumbles and growing hostility with Beijing aren’t helping.

Now some of China’s elite — and others with big stakes in keeping the U.S.-China relationship alive — are stepping in to help.

An ad hoc network of companies, wealthy individuals, academics and former diplomats has emerged to help the United States get the Chinese-made goods it needs to save patients and protect front-line workers — and, perhaps, help polish China’s dented image along the way. They are trying to navigate snarled supply chains, connect wary buyers and sellers and help overwhelmed local officials in desperate need of equipment.

The group includes people like Jack Ma and Joseph Tsai, the co-founders of Alibaba, the Chinese e-commerce giant; Marc Benioff, the co-founder of Salesforce, who struck a pact with Alibaba last year to sell its services in China; and Yichen Zhang, the chairman of Citic Capital, a major Chinese investment firm affiliated with a state-run conglomerate.

Responding to calls for help from doctors, Mr. Zhang saw a chance to help one of Citic Capital’s portfolio companies, which got into the business of making protective gear for China during its own outbreak, and Yale University, which his daughter attends. He sent 10,000 masks and 40 protective gowns to Yale’s health clinic.

Altruism may be just one factor for the others as well. Under pressure to deflect criticism of its own performance, the Trump administration has blamed China for the global spread of the devastating virus. President Trump has also accused China of taking American jobs and launched a trade war against Beijing. Two-thirds of Americans now hold unfavorable views of China, according to a Pew Research Center survey released this week, the highest level since it began asking the question in 2005.

The companies and individuals are acting at a time of yawning gaps, both in the vast and important U.S.-China relationship and in the American government’s own response. The Trump administration has frustrated states by telling them to buy their own equipment and has struggled to meet the nation’s growing demand.

“It’s a new feudalism in America,” said Orville Schell, director of the Center on U.S.-China Relations at the Asia Society. “China recognizes this and China, too, they’ve had their talk with Trump, but they’re also trying to stitch into the American fabric at the sub-national and the corporate level.”

Filling those gaps could help the image of Chinese business in the eyes of the American public.

Mr. Ma of Alibaba, China’s richest person, chartered a plane to New York in March to deliver more than one million masks and testing kits, among other donations around the world. This week, Fortune magazine placed Mr. Ma at No. 3 on a list titled “Heroes of the pandemic.” Alibaba’s shares trade in both New York and Hong Kong.

While Andrew M. Cuomo, the New York governor, assailed the federal response to the New York’s plea for ventilators and protective gear, Mr. Tsai of Alibaba and his wife, Clara, together with Mr. Ma arranged for the delivery of 2,000 ventilators and millions of masks and goggles to the state. Mr. Tsai owns the Brooklyn Nets and the New York Liberty basketball teams

This week, the Tsais organized another shipment of half a million masks and goggles to the University of San Diego, which is in the city where Ms. Tsai and their children live. Mr. Tsai also owns the local indoor lacrosse team, the San Diego Seals.

Mr. Cuomo appealed to the Asia Society for help when he called into the group’s remote March board meeting, said the institution’s president, Josette Sheeran. She worked with a community of former diplomats to get connections, she said, while Michael Evans, an Alibaba executive, helped pinpoint and vet reliable manufacturers.

Chinese companies can also burnish their image at home, where the country’s leaders have been anxious to paper over their own mistakes early in the outbreak and show China as a leader in the coronavirus fight. Shipments of protective gear by Huawei, the Chinese telecom equipment giant that American officials have accused of spying for the Communist Party, have been heavily covered by Chinese state-run media. Huawei has said it would never allow spying on its customers.

Some Chinese donors bristle at questions of the motives behind donations. Mr. Yin, of Citic Capital, said the Chinese government and public warmly received donations early in the outbreak from American companies with big business interests in China like Honeywell, JPMorgan Chase, General Motors and Ford, all of which they announced publicly.

“Helping out is helping out,” said Mr. Yin. “If you have to tell everyone to donate anonymously, that is a pretty high bar to ask.”

In Citic Capital’s case, the donations both met real needs and offered business opportunities. Citic owns a stake in a company called Harbin Pharmaceutical, which began producing its own masks in February when it could not purchase enough for its employees or local medical personnel. Selling those masks soon began to look promising. “In the medium term, this becomes a business for us,” said Helen Chui, Harbin’s chief executive officer.

Donating to the United States could help Harbin make a name in a new market. But to get around the stricter regulations, Mr. Yin had to divide Harbin’s masks into 30 separate boxes addressed to his friends in the United States. Citic then used its ties to SF Express, a logistics company it is invested in, to get the company to bend its limit of only 100 masks per box. Mr. Zhang, of Citic, sent another 5,000 to his sister in New York to distribute to local hospitals.

In many cases, Chinese entrepreneurs and their allies are stepping in to untangle logistical problems and shifting regulations in both countries — problems that the deteriorating relationship has made even more difficult to solve. Donations from China began to flow more easily only after Mr. Trump and Xi Jinping, China’s top leader, spoke by phone on March 27, according to several people involved in getting the goods moving.

Even then, problems stood in the way.

Weiqi Zhang, the founder of Blue Oak Education, a Shanghai-based start-up, has been working with an anonymous donor who wants to send masks to the network of hospitals at Harvard University, where Mr. Zhang is an alumnus.

First, he had to determine which hospital had the biggest need for masks. Then he had to sort out regulation. The donor originally wanted to send 40,000 KN95 masks — China’s version of the N95 mask used by front-line medical workers — but at the time the standard was not compliant with U.S. regulations. So Mr. Zhang could only purchase 10,000 N95 masks with the money he had for the donation.

There was also the issue of limited cargo space, as well as concerns that U.S. officials would seize the masks.

“To be honest, we shouldn’t have to do anything,” Mr. Zhang said. “They should be there to help facilitate the donations.”

Some governments have complained about the quality of equipment from China, making many Chinese companies leery of American orders.

“Many factories are scared by rumors that Trump will sue them if they sell to the U.S.,” said Zhou Hua, who runs a mask factory in the China’s Anhui Province.

Alibaba worked with the Salesforce team to identify trustworthy suppliers, ultimately helping them deliver millions of masks, face shields and swabs to U.C.S.F.

But even the two well-connected tech companies faced challenges. Once, a 747 loaded with supplies was held up for several days in Zhengzhou, China, before it was cleared to leave for New York.

At another point, the Salesforce team thought it had two million surgical masks from a source in Shenzhen, China. But as the truck made its way from the warehouse to the airport, some 1.5 million went missing. (The supplier eventually fulfilled the entire order.)

“They were sold right off the truck,” said Ryan Aytay, the co-chief executive of Quip, a Salesforce collaboration tool, who was also pulled into the effort. “It was the wild, wild West.”