China’s Factories Are Back. Its Consumers Aren’t. 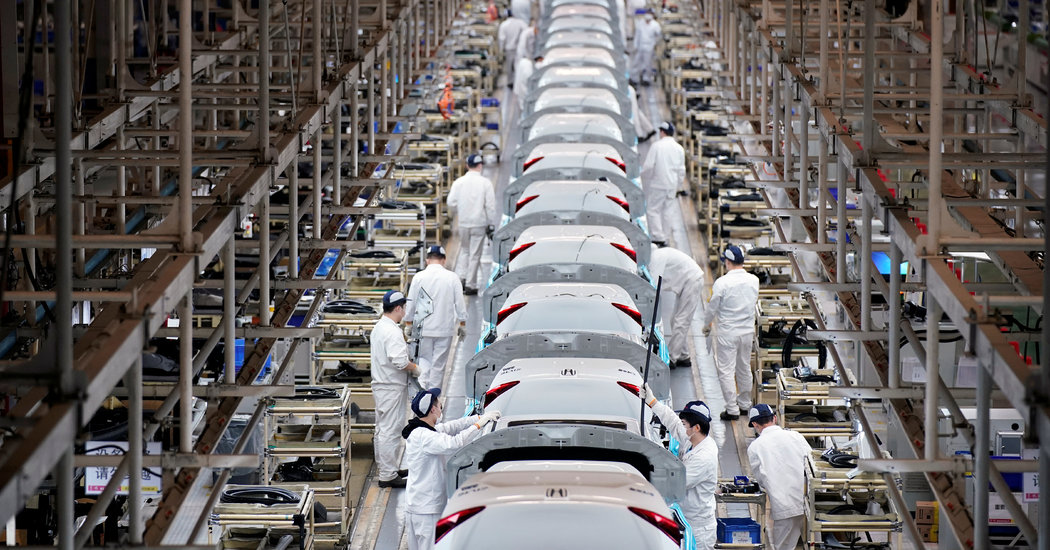 BEIJING — An unemployed young college graduate has stopped buying new sneakers. A clothing store clerk gave up his gym membership. An events planner, his pay cut by four-fifths, now moonlights as a takeout delivery driver — and can no longer afford to eat out.

China, the world’s second-largest economy and a key driver of the global growth engine, has a big problem with its spenders. Until it can be solved, the country’s growth — and, by extension, the world’s — will be difficult to rekindle.

Empowering consumers could be the tougher task. Many lost their jobs or had their pay slashed. Still others were shaken by weeks of idleness and home confinement, a time when many had to depend on their savings to eat. For a generation of young Chinese people known for their American-style shopping sprees, saving and thrift hold a sudden new appeal.

Chloe Cao, a Beijing translator of French stage dramas, once spent over $200 a month in restaurants, $70 a month in coffee shops and as much as $170 for a tube of imported face cream. Now unemployed, she cooks for herself, brews her own coffee and buys $28 Chinese face cream.

“My spending power has suffered a cliff-like drop,” said Ms. Cao. “When I find a job, I will start saving money, and I can’t live a wasteful life like before.”

China’s consumer confidence problem offers potential lessons for the United States and Europe, which are only beginning to plan their recoveries. Even if companies reopen, the real challenge may lie in enabling or persuading stricken and traumatized consumers to start spending money again.

By some measures, China’s economy is getting back on track. By the end of February, most of its factories and mines had reopened, according to a variety of data, cranking out everything from steel to cellphones at a blistering pace through March. Industrial output rebounded to a near-record level.

Others measures suggest the Chinese economy is still limping. Retail sales, which stayed strong during past crises, plummeted almost one-sixth in March from a year earlier.

Satellite imagery shows that Chinese industrial areas emitted considerably less light this spring than they did a year ago, in a sign that fewer building sites may be floodlit for 24-hour construction and that fewer factories may be operating around the clock.

Overall sales of furniture, clothing, household appliances and jewelry each plunged by a quarter to a third in March compared a year earlier. On the street and in malls, many stores have plenty of clerks and some window shoppers but few actual buyers.

Liang Tonghui, a 40-year-old from central China’s Henan province, stood recently at a nearly deserted fruit stand in Beijing, trying to sell peaches and apples. Almost all the other migrants he knows are struggling to find work. He sells apples for 40 percent off at the end of each day because he cannot find full-price buyers.

“If half the people are not coming to work,” Mr. Liang said, “what do you think is the number of people coming here?”

China needs to kick-start consumption because the old ways to juice its economy don’t work like they once did. After running up huge debts to pay for new high-speed rail lines, highways and other infrastructure following the global financial crisis, China tried to depend more on its consumers. In an economy that registered nearly a half-century of continuous growth without recording a single recession, young people in particular became willing to borrow and spend almost like Americans.

A number of economists have called on China to do more to help consumers. While the United States and other countries have unleashed major spending programs that include direct payments to households, China has largely refrained so far, in part because of debt concerns.

Without shoppers, the retail industry — one of the largest employers in China — will continue to suffer.

Peng Fei lost his part-time job at a clothing store in south-central China that closed during the pandemic. He has responded by halting trips to the gym and cut back on going drinking with friends. He has shelved plans to move out of his parents’ home.

The shock of the virus and accompanying lockdowns have also prompted many to review their spending priorities.

Harry Guo, a 22-year-old Shanghai bartender, said that he used to spend any extra money he had on vacations to other cities in China, but had been stunned by how many people had trouble affording even groceries during the pandemic. Now he does not worry about keeping up appearances when he goes out, seldom buying new sneakers or other indulgences.

“As long as the money is in your wallet, there is a strong sense of security,” Mr. Guo said. “It just has to lie there, you don’t have to spend it, you feel comfortable just opening the wallet and seeing it.”

To qualify for extra loans from banks or rent waivers from landlords, businesses have typically been required to avoid layoffs. Many companies reduced hours and pay instead.

Chen Ke works for a Shanghai sports events planner and saw his pay drop by four-fifths last month as events were canceled. He has started working part time as a food delivery driver and has given up restaurant meals in favor of instant noodles and pasta at home. He now makes coffee from instant powder instead of buying freshly brewed cups at his local convenience store.

“The salary used to be put into your bank account every day, it was just a number,” Mr. Chen said. But delivering food for less than a dollar per trip, “I really understand how hard it is to make money.”

The risk for China is that its consumers grow too cautious in their spending. The country has spent years enlarging its social safety net to extend health care and other services to more people so that they will spend their money instead of saving it for an emergency.

As a 29-year-old who could always find work, Ms. Cao, the Beijing translator, never worried about where her next paycheck might come from. She accumulated a closet full of expensive handbags.

Amid the epidemic, one day she pulled out all of her handbags, spread them on her bed and examined them with dissatisfaction. “I spent so much money to buy handbags,” she said to herself. “How can these handbags help me now?”

It is still not clear whether the new consumer frugality in China will last beyond the broad availability of a vaccine and the resumption of normal life. But for now, many are saying that their attitudes have changed for good.

“What if I get a serious illness in the future, what if I lost my job again in the future?” Ms. Cao said. “I think that in the future, I must have a certain amount of money in my bank account to make me feel secure.”