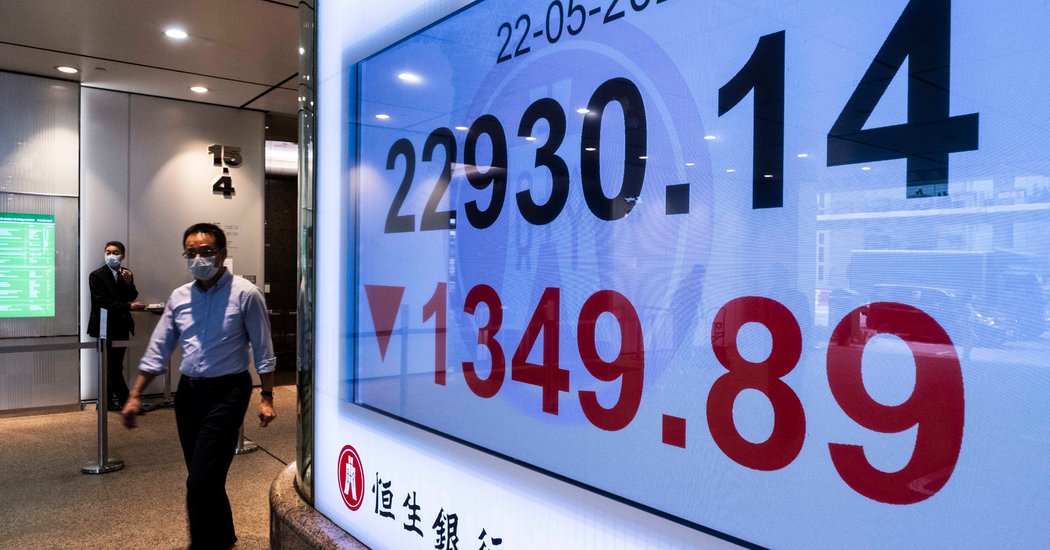 HONG KONG — China’s desire to take a stronger hand in running Hong Kong has imperiled its status as Asia’s financial capital, sending its stock market into its sharpest plunge in five years and spurring predictions that money and business could soon leave the former British colony.

The threat does not come just from Beijing, which late on Thursday outlined its plan to bypass Hong Kong leaders and enact national security laws affecting the territory of roughly seven million people. That move puts Hong Kong squarely in the middle of the growing conflict between China and the United States, which is increasingly challenging Beijing on a number of fronts and could retaliate in ways that hobble its appeal as a place to do business.

Businesses and investors worry that a bruising clash between the superpowers could put an end to Hong Kong’s enviable position as a bridge between China’s powerful economic engine and the rest of the world.

“No matter what, they need to maintain Hong Kong’s unique status,” said Fred Hu, a prominent investor and the former chairman of Goldman Sachs’s Greater China business. His investment firm, Primavera Capital Group, has put billions of dollars in investments into China over the years.

“It’s not only crucial for Hong Kong’s future, but also really for China as a whole, in today’s highly uncertain and volatile political climate,” he added.

Investors expressed their fears in no uncertain terms. Hong Kong’s stock market tumbled 5.6 percent on Friday. Futures trading in the Hong Kong dollar, which is pegged to value of the American dollar, indicated that investors were expecting money to flood out of the territory.

At stake is Hong Kong’s status as a semiautonomous Chinese city with an independent judiciary, guarantees of free expression and assembly, loose business regulation and low financial and trade barriers with much of the world.

Though it benefits from China’s wealth, Hong Kong operates outside the authoritarian mainland, which offers none of those attributes. It is home to the regional headquarters of major global and Chinese companies alike.

Anti-Beijing protests last year, which led to pitched battles between protesters and police and sometimes filled its central financial district with fires and tear gas, raised questions about how long Hong Kong could remain appealing as a place to do business. Beijing’s move on Thursday gave those questions new urgency.

Brushing aside local leaders, Chinese officials announced that they planned to proceed with sweeping security measures for Hong Kong that could take effect later this year. The officials did not disclose details.

The sudden and unexpected move by Beijing has prompted fears that the Chinese Communist Party is willing to overstep freedoms that were promised to Hong Kong when Britain handed it back to China in 1997.

It raised questions about whether businesspeople could fall afoul of China’s traditionally broad definition of national security. Could banks break the law by publishing skeptical research about Chinese economic data or state-run companies? Could crimes considered ordinary elsewhere be considered national security threats, to be tried by secretive mainland courts?

“How tightly would legislation be drafted to avoid ambiguity for business?” said Tara Joseph, the president of the American Chamber of Commerce in Hong Kong. “Would people who seem to be breaking national security law be tried in Hong Kong or in mainland China? Overall, this raises the risk factor for Hong Kong.”

Hong Kong officials moved quickly to assuage concerns. Carrie Lam, the territory’s chief executive, said that the security law would target “acts of secession, subverting state power and organizing and carrying out terrorist activities,” blights that she said the business sector had been “worrying about over the past year.”

Leung Chun-ying, a former chief executive of Hong Kong who is now a top Chinese adviser, said the national security measures were in the best interest of both Hong Kong society and investors.

“With such a law, it does not hinder foreign investors from investing locally, nor does it hinder the freedom enjoyed by local residents according to law,” Mr. Leung said in an interview with Chinese state media.

Officials in Washington may be an even more crucial audience. Hours after Beijing unveiled its plans, American lawmakers proposed legislation that would target Chinese officials and entities that trample on Hong Kong’s semiautonomous status. A proposed bill put forward by Senator Chris Van Hollen, Democrat of Maryland, and Senator Patrick J. Toomey, Republican of Pennsylvania, would expose global banks to sanctions if they do business with entities that do the same.

“In many ways, Hong Kong is the canary in the coal mine for Asia,” Mr. Toomey said in an emailed statement. “Beijing’s growing interference could have a chilling effect on other nations struggling for freedom in China’s shadow.”

The State Department has delayed its annual report to Congress assessing the special status that it awards to Hong Kong while it waits to see details on Beijing’s new proposed security law in the coming days.

If the United States decided that Hong Kong’s relative autonomy was coming to an end, President Trump could take away certain privileges it grants the territory.

Tens of billions of dollars in trade would suddenly be subject to tariffs and included in the tit-for-tat trade war between Washington and Beijing. American officials could curtail travel from Hong Kong and make it harder for its people to get American work visas. Hong Kong would also have a harder time buying technology deemed sensitive by the Washington. The convertibility of Hong Kong’s currency — which is freely exchange with the American dollar — could also be at stake.

“If they did abolish it, they are saying goodbye to Hong Kong,” said Ms. Joseph, of the chamber of commerce.

Some are already saying goodbye. Last summer, money began to flow out of the city and into Singapore, a regional safe haven.

The money appears to have started to flow out again this year. As of March, foreign currency deposits at both domestic and international banks operating in Singapore had nearly doubled since July, totaling $15 billion. The data does not say where the money is coming from, but economists point to the doubts over Hong Kong.

“Increasingly these concerns are seeping into business decisions,” said William Kaye, a longtime investor in China and founder of Pacific Group, the investment firm. “What is just a trickle could become a flood of capital out of Hong Kong.”