Chinese buyers stock up on oil as coronavirus batters prices 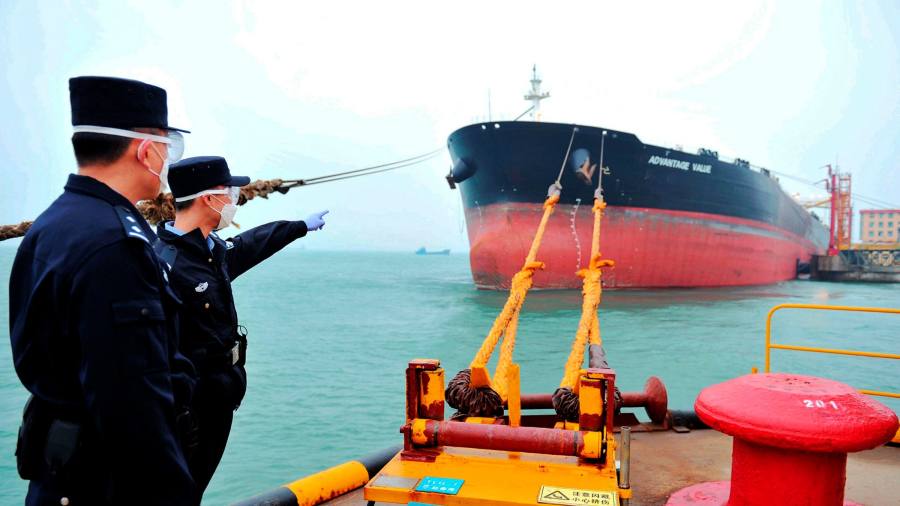 As the coronavirus epidemic brought the world’s second-largest economy to a halt in late January and early February, Chinese importers were busy boosting their monthly purchases of crude oil.

According to the National Bureau of Statistics, over the first two months of the year China’s imports of crude oil increased more than 5 per cent compared with the same period in 2019. This trend continued through March even as it became evident that China’s economy was not going to snap back with a V-shaped rebound.

Chinese buyers, the NBS said, had taken advantage of historically low oil prices to stock up. Brent crude, the international benchmark, fell about 25 per cent between December and February, before plummeting a further 60 per cent in March.

The plunge was even starker for West Texas Intermediate. The US benchmark last week turned negative in a development that implied companies holding oil were running out of places to store it and were prepared to pay people to take it off their hands.

By that point China’s economy had stabilised relative to those in Europe and North America, where the pandemic continued to rage, raising hopes that Chinese demand might help set a floor for collapsing oil prices.

Unfortunately for the global oil industry, Chinese companies were also running up against storage constraints.

“Taking advantage of the plunge in oil prices to increase crude reserves sounds very appealing, but the actual situation doesn’t allow us to buy and store as much as we want,” said Li Li, an energy analyst at ICIS in Guangzhou.

Analysts at Oslo-based Rystad Energy estimate that China’s onshore storage capacity totals 1.2bn barrels and is currently 85 per cent full. That is similar to the US, where government and commercial storage capacity of 1.5bn barrels is 80 per cent utilised. “Global storage is being filled to the brim,” Rystad said in a recent report. “Available capacity is below the theoretical maximum as tanks cannot be 100 per cent filled and not all market participants have equal access since most available capacity is concentrated in the US and China.”

The world’s two largest economies account for about 35 per cent of global crude storage capacity, according to Rystad. The size of the Chinese government’s strategic petroleum reserves is a closely guarded state secret, but most analysts estimate them to be about one-third to one-half of those in the US, where reserves stood at 636m barrels last week.

Regrettably for the world’s big oil producers, which have agreed to cut output by 9.7m barrels a day beginning next month, the Chinese government cannot build tank farms as quickly as it can quarantine hospitals. “At present the industry does not have particularly large-scale investment projects to expand storage and it is now almost the middle of the year,” added Ms Li. “Any construction starting now will not be completed this year.”

She noted that some of China’s available storage capacity is in inland areas, far from coastal ports where it is most needed: “It’s not easy to move imported oil from the coast to inland storage facilities.”

Chinese oil demand is also not recovering anywhere near as fast as many had hoped a few months ago. Xizhou Zhou, a Beijing-based energy analyst for IHS Markit, said that this year overall Chinese crude demand is expected to be 107,000 barrels a day below 2019 levels — the first such decline in at least 30 years. IHS’s pre-coronavirus projection was for Chinese oil demand to increase by 600,000 barrels a day.

“China will be buying and storing more crude just like anyone else with the storage space to do so, which will help a little,” Mr Zhou said. “But the [global] oversupply in the near-term is simply too great. And there’s probably more downside risk than upside risk right now.”

The Chinese government recently reported a historic 6.8 per cent contraction in first-quarter GDP compared with the same period last year. As of mid-April most analysts estimated that economic activity was running at 80-90 per cent compared with last year.

That is partly because government officials’ fears of a second wave of coronavirus infections “imported” by Chinese nationals returning home from Europe, the US and Russia have made them cautious about revving up the economy.

“Until aviation and transport in general gets back up to speed, oil consumption is going to remain relatively low,” said Tim Huxley, chairman of Hong Kong-based Mandarin Shipping. “In February and early March nothing was being manufactured in China. Now they’re back to work but of course overseas demand has just cratered unless you’re making face masks.”