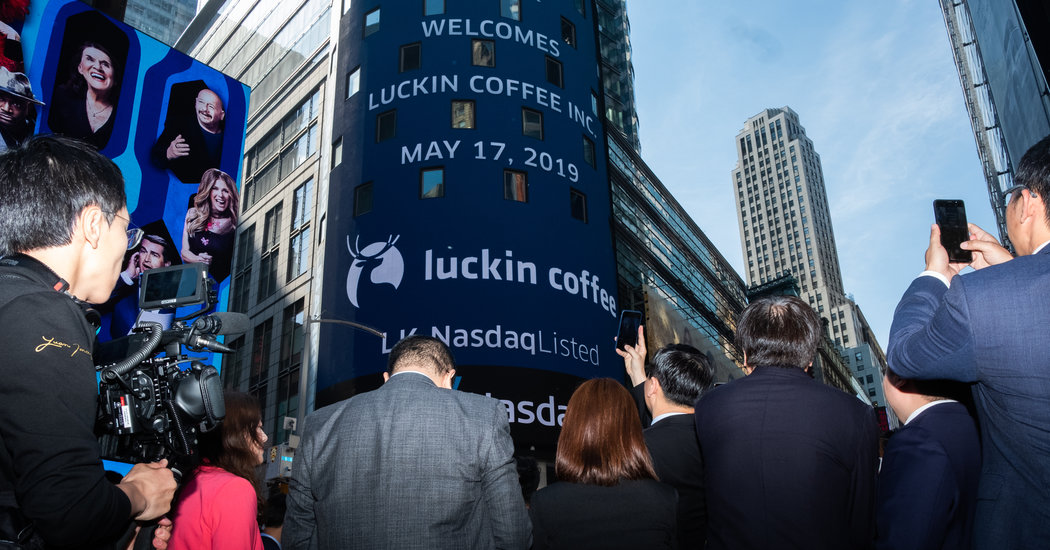 HONG KONG — Luckin Coffee had an audacious goal: take on Starbucks in China. Last year, unprofitable, burning through cash and not even two years old, it went to Wall Street to raise over half a billion dollars. Just a few months ago, it was valued at $12 billion.

The one-time darling has now imploded spectacularly in an accounting fraud that has roiled China, a cautionary tale that has renewed a push in the United States to cut Chinese companies off from Wall Street.

Lawmakers from both parties say Chinese companies do not play by the same rules, adding to rising tensions between Washington and Beijing. And Luckin, which disclosed this month that it had fabricated most of its 2019 revenue, is also resurfacing frustrations from American regulators over the ability to prosecute Chinese companies often given cover by Chinese officials who cite the need to protect state secrets.

“The Luckin Coffee scandal is just one of many examples of Chinese fraud, and it should be a major wake-up call for policymakers and regulators that the time for action is now,” said Senator Marco Rubio, Republican of Florida.

China’s most powerful regulator has announced an investigation, and it made an unusual public statement to say it would work with Washington. Former regulatory officials and lawyers have expressed skepticism that China’s investigation of Luckin Coffee is anything more than perfunctory.

The country’s moves have failed to ease American lawmakers’ broader concerns and have added to the risk of further clashes over financial relations.

“If Chinese companies want access to the U.S. capital markets, they must comply with American laws and regulations for financial transparency and accountability,” said Mr. Rubio, who is pushing a bipartisan bill that would force Chinese companies to abide by federal auditing rules and disclosure requirements.

Soon after he and three other senators proposed the bill, known as the Equitable Act, last year, two Senate colleagues introduced a similar bill that also aims to mandate the delisting of foreign companies that fail to comply with auditing regulations.

White House national security officials say they have the same concerns, but some advisers to President Trump who encourage trade with China and have close ties to Wall Street firms have tried to downplay the issues. The same split occurs over many other policy debates on China.

Congressional aides said that federal regulators had tried to grapple with Chinese companies’ lack of transparency, with little success. A law could help, they said.

Mr. Trump’s trade war with China has already set in motion some efforts to decouple the world’s two biggest economies. Some supply chains are shifting out of China. Access to critical technology is being limited. And American lawmakers from both parties have discussed other legislation that would make it harder for Americans and their pension funds to invest in Chinese companies.

“There is no question that the lack of transparency and opacity by many Chinese companies, including as it relates to ownership structure and company ties to the Chinese Communist Party, create real and material risk for U.S. investors and for our capital markets,” said Senator Robert Menendez, Democrat of New Jersey, a co-sponsor of the bill with Mr. Rubio.

The Luckin scandal has given American lawmakers a prominent example as they make their case.

When it asked stock investors in America to back it last year, Luckin was an unprofitable start-up that handed out cash and aggressive subsidies to its customers. It promised to overtake Starbucks with its smartphone app for coffee delivery, thousands of stores and nearly 17 million customers, which it attracted by aggressively doling out coupons for Luckin drink products.

Investors were so enthusiastic that they sent its shares jumping 20 percent on its first day of trading on the Nasdaq and the company raised some $645 million. Big names like BlackRock, the world’s largest asset manager, and Singapore’s sovereign wealth fund quietly invested large sums. Venture capitalists sang its praises.

Even when some market watchers began to warn that Luckin’s rosy outlook and revenue growth did not seem right, the stock kept soaring. In January, Luckin executives raised over a billion dollars through a secondary share issue and stock-like bonds. By then the market was valuing the company at $12 billion

Around the same time, an investor, Carson Block, published an investigative report by an anonymous author that accused Luckin of fraud. A number of skeptical investors like him took positions to bet against its stock.

Then, in April, those predictions came to bear. The company said an internal investigation had discovered that a top executive and other employees had fabricated some $310 million worth of transactions over 2019. In a day, some $5 billion was shaved off the company’s market value. Louis Dreyfus, one of the world’s biggest commodities traders, and other powerful investors lost millions.

Nasdaq, the New York-based exchange, announced it was halting trading in Luckin shares until the company answered its questions.

The test now will be whether the S.E.C. can conduct its own investigation, with access to corporate documents and executives.

The China Securities Regulatory Commission, the market regulator, has pledged to investigate. Over the weekend officials from the State Administration for Market Regulation raided the offices of Luckin executives.

The commission in China this week did what many in the international regulatory community thought unthinkable: It said publicly that it would cooperate with the S.E.C.

The regulator also said that it already cooperates with the Public Company Accounting Oversight Board, or PCAOB, a nonprofit auditing corporation created by U.S. legislation in 2002. The group, it said, had been invited on several occasions since 2018 to join inspections of accounting firms, coincidentally the most recent on April 3, the day after Luckin made its disclosure.

American regulators, though, warn of the opposite.

Last week, Jay Clayton, the chairman of the S.E.C., said his agency was effectively powerless to investigate corporate skulduggery because of China’s lack of assistance. In 2018, the S.E.C. and the oversight board complained that they faced “significant challenges” in overseeing the financial reports for U.S.-listed companies based in China.

Judith Burns, a spokeswoman for the S.E.C., declined to comment.

The recent statement from the Chinese commission is being read in different ways.

Eric J. Pan, managing director of Rock Creek Global Advisors and former head of International Regulatory Policy at the S.E.C. said he interpreted it as “a pre-emptory defense against expected criticism,” of the Chinese regulator.

“The C.S.R.C. basically is saying that it is doing everything properly, and it is the PCAOB that is acting unreasonably,” Mr. Pan said.

To some, it was an indication that China may be worried about the impact of the scandal on its domestic stock market and the reputation of Chinese companies.

“It will have an impact on Chinese companies who do things properly when they try to raise capital in U.S. stocks,” said Zhang Yifan, a private equity investor at Commando Capital, an investment fund in China.

“It will indeed lead to a very serious crisis of trust. It will take years to ease,” Mr. Zhang said.

In Washington, Republican operatives and politicians say they intend to keep the spotlight on China as the November election approaches, in part to paper over the deep failures of the Trump administration in addressing the coronavirus pandemic.

That could give an opening for lawmakers from both parties to move forward with the bills aimed at forcing Chinese companies to be more transparent or risk being delisted.

In February 2019, the U.S.-China Economic and Security Review Commission released a report with a complete list of all Chinese companies on the three largest U.S. stock exchanges. As of Feb. 25 of that year, there were 156 companies on the exchanges with a collective market value of $1.2 trillion, the report said. At least 11 were state-owned companies.

A significant number had denied access to information sought by the accounting oversight board, the commission found.

Some Washington policy experts doubt the U.S. government will be able to take meaningful action against opaque Chinese companies. Michael Pillsbury, an informal China adviser to Mr. Trump, said the S.E.C. often makes the logical argument that Chinese companies would simply choose to list on exchanges in other countries.

“It’s in the tool kit of the means of punishing China,” he said. “But you can’t just to do it out of the blue. It’s not a finely calibrated strategy.”