Cities criticized for shutting down bikeshare amid protests, pandemic 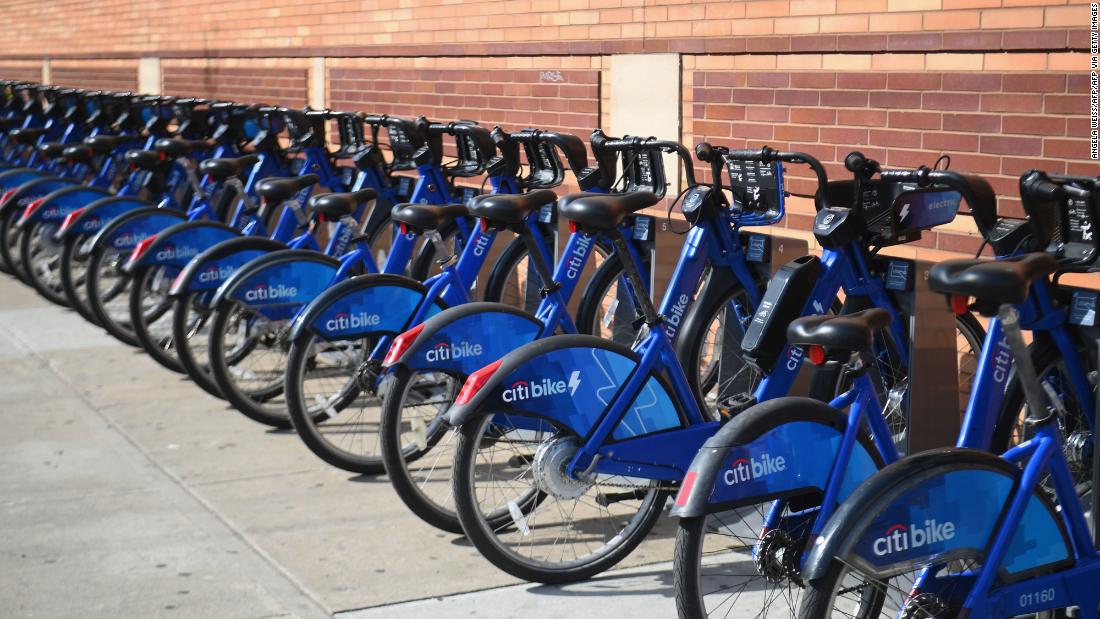 Local governments say they’re concerned the bikes will be used for violence and looting during protests following the death of George Floyd.
Critics say halting bikeshare can strand essential workers, or force commuters to take less safe modes of transportation, such as buses and subways, where social distancing is challenging. Bikeshare access has been restricted in cities such as New York, Chicago, Houston, Columbus, Ohio, Portland, Oregon, Minneapolis and Washington, DC. Bikes’ popularity has sky-rocketed this spring because they offer affordable transportation while social distancing.
New York and DC had previously offered free bikeshare memberships to essential workers.

Houston’s BCycle downtown stations have remained closed since Saturday. Chicago’s Divvy system closed Sunday, and reopened Wednesday morning, but only during daytime hours. New York City closed Citi Bike Tuesday night from 8pm-5am. Wednesday evening it will close at 6 pm, two hours ahead of the city’s curfew. Capital Bikeshare stations in the District of Columbia will close Wednesday evening at 11 pm, aligning with the city’s curfew.

“Citi Bike is a way for people get around. It’s not a tool for destruction,” said Joe Cutrufo, a spokesman for the New York advocacy group Transportation Alternatives. “If you’re a hospital worker and your shift ends after curfew, what are your alternatives?”

The New York closure drew the ire of Lyft, which owns and operates the system.

“We disagree with this decision and believe it is important for the system to remain open and provide a reliable transportation option. We know how disruptive this is to everyone who relies on Citi Bike to get home — especially essential workers,” Lyft’s Citi Bike account tweeted Tuesday.

A spokesman for New York Mayor Bill de Blasio alleged that bikes had been seen used in some instances of looting, and that the police department initially requested the Citi Bike shutdown. The spokesman said that essential workers could continue to travel in cabs, subways and buses. Uber and Lyft are suspended from operating from 8pm-12:30am Wednesday evening in New York, as they were Tuesday.

Some critics expressed alarm that the bikeshare closures would affect black Americans during a national conversation about fair treatment of all races.

“During any other parade people use bikeshare for all sorts of reasons,” said Oni Blair, executive director of Link Houston, which advocates for equitable transportation. “But when there’s a rally and protest for democratic values to raise the profile of what’s happening to black people in Houston, to shut down access that’s affordable, easy and generally safe, is unspeakable.”

Beth Martin, executive director of Houston’s BCycle, said they hadn’t heard of incidents of any bikes being used as weapons or to aid in violence or looting. Martin said the bikeshare is awaiting an all clear from the city to reopen the downtown stations.

In Washington DC, a spokesperson for the city department of transportation said dockless scooters had been used as projectiles and weapons in a limited number of cases on the first night of protests. The city’s police department requested that bikeshare be paused to limit the risk, the spokesperson said.

Some cities have kept their bikeshare systems open, such as Jersey City, which is home to a part of the regional Citi Bike system.

“It’s widely used on a daily basis and we see no need at this time to shut the system down,” city spokeswoman Kimberly Wallace-Scalcione said. “Jersey City officials are working with organizers of these peaceful protests to maintain the safety of our residents, the peaceful protesters and our first responders.”

Boston hasn’t considered limiting bikeshare and all its stations are open, according to a city spokesperson.