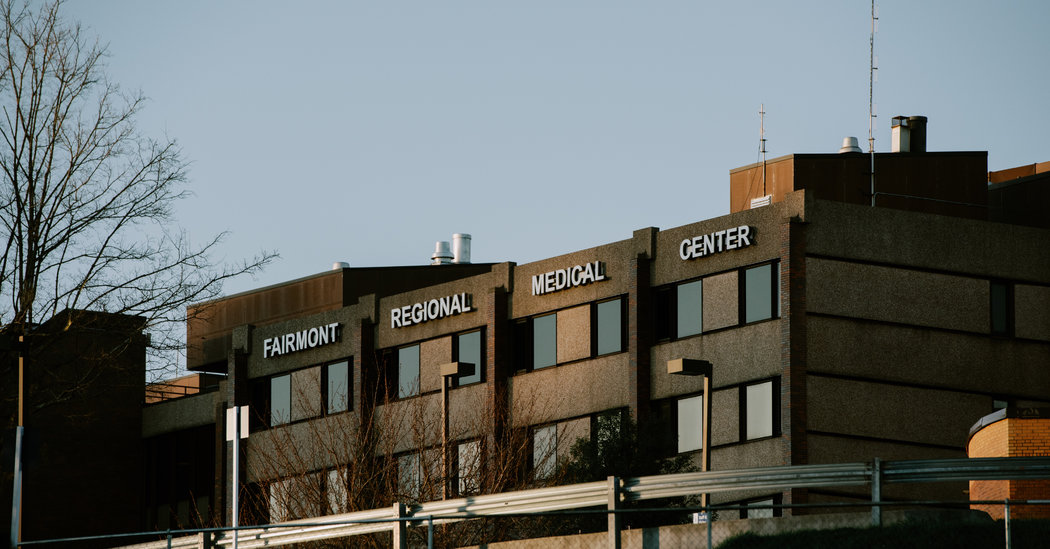 Mr. Nuzum, a 54-year-old animal control worker, was already in cardiac arrest when the emergency workers arrived on April 3. That left them with a difficult decision: Should they transport their patient to the nearest hospital, 30 minutes away?

“There’s only so much one paramedic can do in the back of an ambulance,” said Michael Angelucci, who leads the Marion County rescue squad that cared for Mr. Nuzum. The two-person team that responded decided it couldn’t risk the long ride and instead tried to revive the patient at the scene. But the workers couldn’t save him.

Two weeks earlier, the options would have been different. Fairmont Regional Medical Center, just five minutes from Mr. Nuzum’s home, would still have been open. Mr. Angelucci, who is also a state representative, can’t help wondering if the hospital and its emergency room could have given the man a fighting chance.

“It’s incredibly frustrating that this entire community is stranded without a hospital,” he said.

Fairmont was one of three hospitals that have shut down in this corner of rural West Virginia and Ohio since September. They delivered hundreds of babies each year, treated car crash and gunshot victims, repaired hearts and knees and offered addiction treatment and psychiatric care.

They had been acquired by a for-profit company, Alecto Healthcare Services, beginning in 2014. Employees expected the new ownership to put the institutions on solid footing after years of financial struggle. Instead, decisions made by Alecto wound up undercutting patient care and undermining the hospitals’ finances, according to more than two dozen interviews with doctors, nurses, other staff members, government officials and patients, as well as a review of court records.

Doctors were fired to save on salaries; many patients followed them elsewhere. Medical supplies ran short. Vendors went unpaid. Finally, one after another, the three hospitals ceased operating. At the request of the governor, the West Virginia attorney general’s office is investigating the company’s decision to close them.

The shutdowns — besides Fairmont, Alecto owned Ohio Valley Medical Center in Wheeling, W.Va., and East Ohio Regional Hospital in neighboring Martins Ferry, Ohio — have forced the region to fight a coronavirus outbreak with 530 fewer licensed hospital beds than it had a year ago.

The counties they serve have already recorded 171 coronavirus cases and nine deaths. Hundreds of people whose lungs were scarred by decades in coal mines are vulnerable to a devastating respiratory syndrome caused by the virus, doctors said.

“We’ve now got a hospital that existed for over 100 years that, in the middle of a pandemic, sits empty,” said Jonathan Board, chairman of the Marion County Chamber of Commerce’s board of directors, referring to Fairmont.

Dr. John Wolen, the former trauma chief at Ohio Valley, now works at Wheeling Hospital and is bracing for an influx of patients. “The extra capacity that we will absolutely need is not going to be there,” he said.

Across the United States, hospitals serving rural areas have spent decades trying to provide medical care and produce enough revenue to stay open. They have closed in increasing numbers in recent years as local populations have declined. About 170 rural hospitals have shut down since 2005.

Some nonprofit or community-owned hospitals, like the three Alecto had bought in West Virginia and Ohio, turn to for-profit hospital chains as a lifeline, hoping that a focus on generating revenue could help them survive.

“There is something very concerning to me about having more for-profit companies in rural health care,” said Jill Horwitz, vice dean at the University of California, Los Angeles, law school. “The more rural a hospital, the more people depend on it for lifesaving care.”

“The goal of the for-profit is to make money,” Ms. Horwitz said. “That doesn’t mean they’ll do anything to make a buck, but they have a different goal from nonprofits.”

Michael Sarrao, Alecto’s general counsel, said the company had done everything it could to turn the three hospitals around but ultimately found the financial challenges insurmountable. Slow reimbursements by health insurers and cuts to Medicare reimbursement rates were factors, he said.

He contended that the institutions would have closed years ago had Alecto not purchased them, and that the company lost tens of millions of dollars investing in the facilities.

“Alecto has and continues to be focused on saving distressed community hospitals so that they can continue to provide care to the patients who need their care the most and has done its best to achieve this goal,” Mr. Sarrao said in a statement.

Alecto’s chief executive, Lex Reddy, worked for more than a decade at a larger hospital chain, Prime Healthcare. He stepped down as Prime’s chief executive in 2012, during a federal investigation that would result in a $65 million fine by the Justice Department to settle allegations that the company had falsely submitted Medicare claims. The settlement did not make a determination of wrongdoing.

Mr. Reddy, who was not implicated in the scandal and declined through a spokesman to be interviewed for this article, helped found Alecto the same year he left Prime.

Alecto purchased Fairmont Regional Medical Center while it was in bankruptcy in 2014, and bought the larger Ohio Valley Medical Center and East Ohio Regional Hospital in 2017. The acquisitions expanded Alecto’s reach across the country, from the four hospitals it already owned or managed in California and Texas.

Alecto’s hospitals generally serve low-income communities, with most patients covered by Medicare or Medicaid. In Marion County, for example, the population once served by Fairmont has higher-than-average smoking and obesity rates. The state also had the country’s highest rate of drug overdose deaths in 2018.

“We were in very bad straits,” said Martha Connors, who was a mental health technician at Ohio Valley for 13 years. “We fought to have Alecto buy us because no one else wanted to.”

That hope quickly evaporated as the quality of care at the hospitals began to decline, employees recalled. At Fairmont, with 207 licensed beds, and Ohio Valley hospital, with 200, employees said Alecto let staff physicians go, a decision they described as shortsighted. While Alecto may have saved on salaries, the hospitals lost many elective surgeries — a critical revenue generator.

“We went from having about 40 doctors on staff at the hospital to about a dozen in the course of six months,” said Dr. Waid McMillion, who ran Fairmont’s emergency department until it closed. The hospital replaced only a portion of them with contract physicians, who did not bring in nearly as many patients or surgeries.

Two surgeons at Ohio Valley recalled arriving each morning in 2018 to find the surgical scheduling board almost blank. Dr. Joseph Petersen, a surgeon there, said patients had to be moved to other hospitals farther from their homes because there weren’t enough staff members to care for them. “It was very disruptive for patient care and for their families,” he said.

Dr. Wolen, of Ohio Valley, said the hospital lost its status as a level-two trauma center — requiring it to transfer some seriously injured patients to other hospitals — in part because it no longer had a full-time plastic surgeon and a full-time neurosurgeon.

With fewer patients bringing in less revenue, staff members noticed regular supply shortages that affected care. Two employees at East Ohio recalled three days in 2018 when the intensive care unit had to bring some ventilator patients out of medically induced comas because it was running short of sedatives like fentanyl and hydromorphone.

When such patients wake up, they often try to pull out their breathing tubes, said Joyce Younkins, who worked as an I.C.U. nurse there. During that stretch, staff members had to put restraints on the distressed patients. “It’s not something you ever want to have to see,” she said.

In her six years at the hospital before Alecto took over, Ms. Younkins and others said, nothing similar ever happened. “There was never a lack of supplies, never a lack of anything we needed,” she said. “Under Alecto, you had to worry about having enough IV bags, needles, syringes, salines, drugs, even toilet paper.”

One health care technician recalled buying toothpaste and feminine hygiene supplies for patients when the hospital ran out. Another said he purchased a roll of ultrasound film off eBay for $63.

“Everybody wants a picture of their baby when they come for an ultrasound,” said Paul Porter, the ultrasound technician. “I hated having to tell them I can’t give you a picture today.”

Alecto also at times fell behind on payments for employees’ health insurance, so their coverage lapsed, according to multiple former staff members.

And Jeremy Wendel, who worked as a registrar in the Ohio Valley and East Ohio emergency rooms, said that Alecto was deducting his $550 child support payment from his paycheck but not passing the money on to the state. It took two months to resolve the situation, he said. “It felt like they were stealing from me,” he recalled. “I was paying this money, but they weren’t sending it to my ex, so where was it going?”

Mr. Sarrao of Alecto conceded that while there “may have been some administrative issues at O.V.M.C. that caused some delays in payment, these issues have been resolved and payments reached their correct destination.”

Hospital workers traded whispers, wondering if their employers would soon close shop and worrying what would happen to their patients.

Last September, Alecto closed the Ohio Valley hospital. It happened so suddenly that one longtime employee learned he no longer had a job while checking Facebook. Three weeks later, East Ohio closed.

At Fairmont, many feared they would be next. Alecto shut the doors on March 19, despite local leaders’ pleas that the hospital should stay open to weather the pandemic.

The closures have left 1,800 people seeking work in a struggling economy and local governments fighting to recoup Alecto’s unpaid taxes.

Wheeling is currently trying to collect $821,000 its mayor says Alecto owes the city, including $425,000 in parking fees and $140,000 in water and sewer fees. Martins Ferry is trying to recoup more than $200,000 in local income taxes, according to the city auditor. S.E.I.U. District 1199, the union representing Fairmont workers, is still pursuing retirement fund contributions that were never paid.

With the hospitals closed, some former patients have struggled to find new providers.

Joyce Faber, 60, who is confined to a wheelchair, hasn’t been able to see a gynecologist since last year. A survivor of breast cancer, she takes drugs that put her at a higher risk of ovarian cancer. She used to have regular gynecology appointments at Ohio Valley, which had a special table that allowed Ms. Faber, who is paralyzed, to be examined. She has been unable to find a nearby hospital with similar equipment.

Heidi Porter recently had to bring her elderly mother, who has bipolar disorder and experiences hallucinations, into Wheeling Hospital. With no psychiatric beds available there — Ohio Valley had operated the county’s only unit — she was transferred to a facility two hours away in Columbus, Ohio.

West Virginia University’s health system, about 12 miles from Fairmont, plans to reopen part of the Fairmont hospital but will not be able to do so until late May.

For now, the three communities face a stretch of months where hospital beds could be scarce in the midst of a global pandemic. Jennifer Henderson Hayes, who was the chief pharmacist at East Ohio, now works at the remaining hospital in Wheeling.

She has already seen greater strain on the emergency room there. “You see people, potentially sick with Covid-19, waiting for eight or 12 hours just to be seen.”