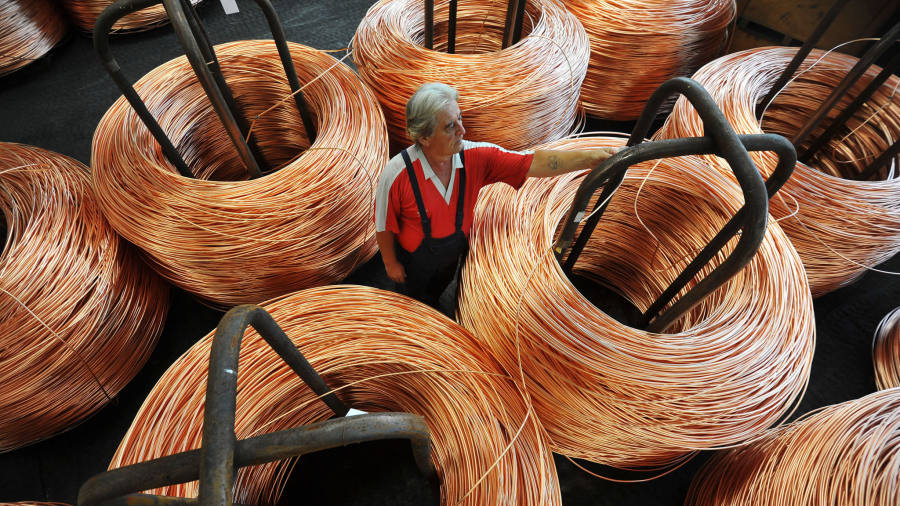 Copper hit a four-year low on Thursday as fears intensified that the coronavirus outbreak will lead to a global recession.

The industrial metal, used in almost all construction projects and white goods, is on course for its worst weekly performance since the 2008 financial crisis, caught up in investors’ “sell everything” approach as they head for the safety of cash.

“Macro-economic sentiment hasn’t been this bad since the global financial crisis and copper is selling off along with everything else,” said Vivienne Lloyd, commodities analyst at Macquarie. “I’m just one of many people watching their asset class tanking.”

Copper fell as much as 8 per cent to $4,371 a tonne in Asia trading amid forecasts that the coronavirus pandemic would put a huge dent in global industrial production. JPMorgan analysts expect it to reduce by more than 10 per cent year-on-year in February and March.

Copper later recovered to trade at $4,818, up 1.5 per cent on the day. On Wednesday, the price had fallen 8 per cent, its biggest one-day percentage fall in more than a decade.

“The Chinese decided to throw in the towel today,” said Anna Stablum at Marex Spectron, a commodities brokerage, pointing to the Shanghai Futures Exchange, where the copper price opened with the biggest fall permitted under trading rules. Copper was followed down by aluminium, zinc and tin.

With coronavirus spreading rapidly outside China and factories in the US and Europe being left idle, the copper market is bracing for a huge demand shock that will leave many miners struggling to generate cash. About 15 per cent of the industry could be losing money at current prices, according to analysts.

Goldman Sachs expects copper supply to outstrip demand by 260,000 tonnes this year — its previous forecast was the reverse, with demand to outstrip supply by 140,000 tonnes.

Inventories of copper in warehouses approved by the London Metal Exchange have surged about 30 per cent in the past week to 230,000 tonnes, mostly in South Korea and Taiwan.

The strength of the US dollar is heaping further pressure on the metal. Dollar-denominated commodities such as copper typically suffer when the greenback rises because they become more expensive for people holding other currencies.

The crash in oil prices and the weakness of producer currencies such as the Chilean peso has also driven down the marginal cost of production — the level at which commodity prices have historically found support in oversupplied markets. For most big miners a strong US dollar reduces their wage bill in local currency terms, lowering their break-even costs. More production adds downward pressure to the price.

“Around half of copper production costs are tied directly to the US dollar, and it is appreciating against copper-producing currencies despite a major decrease in US interest rates,” said Max Layton, analyst at Citi.

This week’s sell-off comes despite mining in Peru — responsible for 12 per cent of global copper supply — coming almost to a halt after the government declared a state of emergency.

Delays to production around the world should provide some support to the market but not until the investor panic is over, said Ms Lloyd, adding: “No one cares about mine cuts when they are so afraid of the world.”