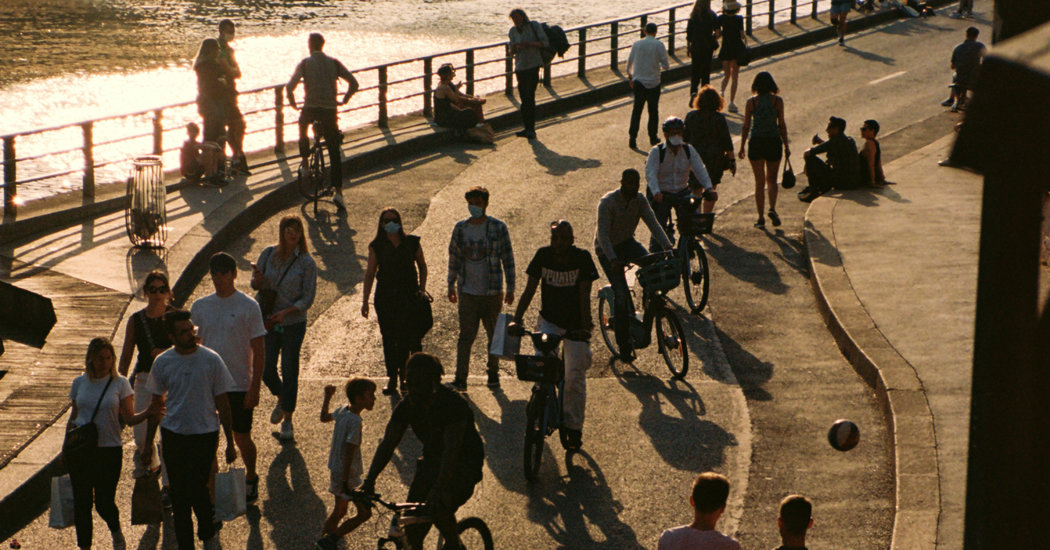 PARIS — As France eased one of Europe’s toughest coronavirus lockdowns last month, a small army of street workers fanned out across Paris in the dark of night. They dropped traffic barriers along car lanes and painted yellow bicycle symbols onto the asphalt. By morning, miles of pop-up “corona cycleways” had been laid, teeming with people heading back to work.

Among them was Christophe Tafforeau, 52, a commercial director at a job training agency, who navigated the throngs for his post-confinement commute.

“This is the first time I’ve ever cycled to my office, but I don’t want to risk using public transportation,” said Mr. Tafforeau, fresh off a 20-minute ride across Paris to his job near the Bastille. “I’m learning to make the bike my main means of getting around.”

As European cities emerge from quarantines, bicycles are playing a central role in getting the work force moving again. Governments are trying to revive their economies from a deep recession, but can’t fully rely on public transportation to get workers to their jobs because of the need for social distancing. In urban areas at least, bicycles are suddenly an unlikely component to restarting economic growth.

Americans are also flocking to bicycles as the coronavirus limits activity and discourages the use of public transit. But in Europe, where many cities have integrated cycling as a mode of transportation, the pandemic is speeding up an ecological transition to limit car traffic and cut pollution, especially as new research draws links between dirty air and Covid-19 death rates.

France, Italy, Britain and their neighbors are accelerating hundreds of millions of euros in investments on new biking infrastructure and schemes to get people pedaling.

Around Paris, residents can get up to 500 euros (about $554) in subsidies to buy an electric bike and a €50 reimbursement to repair an old bike, prompting thousands to wait in snaking lines at bike shops. Public bike rental projects are logging record demand. With new paths springing up daily, bike sales have quadrupled in European cities that ended home confinement, with retailers from Brussels to Tirana reporting shortages.

“This crisis has made clear that we need to change the way we live, work and move,” said Morten Kabell, chief executive of the European Cyclists’ Federation. “In the era of social distancing, people are wary of using public transportation, and cities can’t take more cars. So they are looking to the bike as a natural mode of mobility for the future.”

Authorities say the need for social distancing leaves them little choice. European cities have cut capacity on subways, buses and suburban trains by up to 80 percent. In Paris alone, around 10 million people jammed together each day in public transport before the quarantine; today, to maintain space between passengers, the system only allows in two million, although the restriction are gradually being lifted this month.

To manage the overflow and prevent cars from flooding back onto the streets, the authorities have asked companies to keep employees working from home when possible, and to stagger shifts for people who must go to work. Sidewalks are being widened to accommodate more pedestrians. And solo drivers are being encouraged to car pool with mask-wearing passengers.

The British government this month rolled out a 250 million pound (about $310 million) fund to reallocate more public space to cyclists, widen pavements and create cycle and bus-only corridors. The program expands a state-backed “cycle to work” program with employers, which the government estimates could save the National Health Service £8 billion a year as people get more exercise.

Milan introduced a Strade Aperte, or “open streets,” program creating 35 kilometers of new paths for cyclists and pedestrians as part of a bigger project to transform the city center and lower pollution. The Italian government introduced a 70 percent subsidy for buying bikes.

Berliners offered flowers to workers adding pop-up cycling paths through the German capital, where city authorities are pushing ahead with a previously planned program to favor pedestrians and cyclists.

Paris has been ahead of the pack in this transformation. Before the coronavirus, the city had already added around 1,000 kilometers of protected cycling lanes in recent years, edging out cars from major thoroughfares.

Mayor Anne Hidalgo also appropriated freeways next to the Seine river for cyclists and pedestrians, and closed swaths of heavily trafficked avenues — drawing ire from critics, who said the moves had backfired by creating bigger traffic jams and more pollution.

As France got ready to lift its national quarantine, Ms. Hidalgo ordered work crews to create pop-up bike paths around Paris and its outer suburbs as quickly as possible in the middle of the night, with the aim of adding 50 kilometers by June following existing underground metro and suburban train tracks.

The Rue de Rivoli, once one of the most traffic-snarled thoroughfares in central Paris, is now entirely reserved for bikes, buses and taxis. The pop-up paths are intended to be temporary, but Mr. Najdovski said the city could consider making them permanent “if they work.”

That is still an open question. While the paths are designed to keep cyclists safe, Paris hospitals have reported an increase in injuries among bike riders and pedestrians hit by them. The rise in biking has also created a parking problem that the city is trying to tackle by making space in car parks and creating secure aboveground bike shelters.

Nonetheless, the coronavirus has “shifted the paradigm” in the way people commute, Mr. Najdovski said. “People are waking up and seeing a new bike lane right outside their door.” The experience so far, he added, is that “as soon as a new bike path is laid, people are on it.”

That was the case with Mr. Tafforeau, who rushed out and bought a used bike the day France lifted its confinement. “When you see people in public transport who don’t respect health safety measures, it’s scary,” he said. “Zero risk doesn’t exist, but you can minimize it by using the bike.”

A trim, nattily dressed man, Mr. Tafforeau wasn’t used to riding a bike in a city. But as he joined the crowd going back to work at the job training agency in Bastille, he felt secure inside bike paths that had concrete barriers to keep cars away. “Having so many bike lanes motivates me more to do it,” he said.

During the ride from his apartment in the hilltop neighborhood of Montmartre, he delighted in seeing Paris under the open sky and felt energized from the exercise, even if the uphill commute back home was tougher. The ride took 20 minutes — just 10 minutes more than his usual underground commute on the metro.

On a recent weekday, Mr. Tafforeau waited in a line outside Au Réparateur de Bicyclettes, the shop where he had purchased his bike, to buy accessories. The owner, Stephane Cueff, was forced to close during the lockdown and suffered a major drop in sales. With so many people waiting to buy or repair bikes, he hoped to recover lost profits quickly.

As he showed Mr. Tafforeau the proper way to attach a U-lock, Mr. Cueff said he was heartened to see a rising tide of new riders taking to the streets.

“The bicycle has always been a part of France,” Mr. Cueff said. “If there is an upside to the coronavirus, it may be that we are rethinking how we live, and getting back some of what we had lost.”