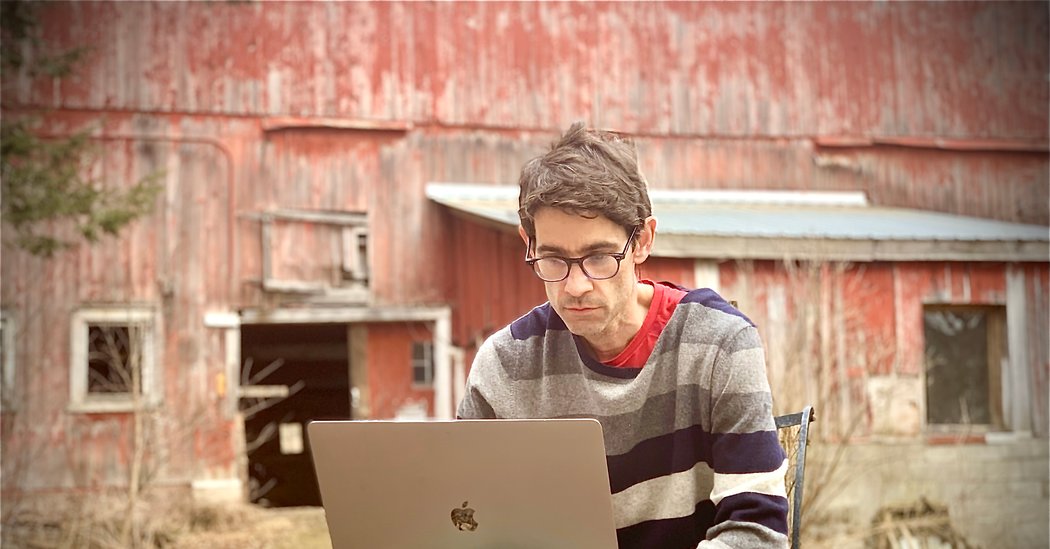 They Slack. And the journalists stuck working from home also plan their coverage through videoconferencing applications like Google Hangouts, Zoom, UberConference, BlueJeans and Nexi.

“Everyone should be jumping on Zoom at least once a day to see members of their team, smile at each other and provide the interaction that will keep us feeling connected,” said Noah Shachtman, the editor in chief of The Daily Beast, in an email. “It’s key to avoid feeling isolated and staying motivated.”

Babies and small children make onscreen cameos. So does Sookie, the brown cat belonging to Henry Blodget, the chief executive of Insider Inc., the publisher of Business Insider.

Staff members at The Verge have spent off hours playing Mario Kart while chatting over the app Discord. Vox Media is planning Zoom reading hours for children and parents.

Despite the coronavirus containment efforts that have emptied newsrooms, journalists across the country have managed to meet their deadlines at a time when the appetite for news seems greater than ever. In the last four weeks, as the number of confirmed coronavirus cases in the United States rose sharply, web traffic surged.

“I do not expect this newsroom to miss a beat,” said Carrie Budoff Brown, the editor of Politico.

The number of minutes spent by readers at news sites has increased by 46 percent, compared with the same period ending a few days ago last year, and overall visits had a 57-percent rise, according to a study of more than a dozen general news websites by comScore, a media measurement company.

Outlets showing dramatic gains included The Atlantic, The New York Times, The Los Angeles Times and The Wall Street Journal, all of which doubled or nearly doubled the number of visits. Most outlets have made coronavirus-related articles available free to nonsubscribers.

A graphics-heavy story in The Washington Post on March 14 headlined “Why outbreaks like coronavirus spread exponentially, and how to ‘flatten the curve’” was its most-viewed article ever, a spokeswoman said.

USA Today’s online audience shot up 30 percent, year over year, and the number of readers visiting Vox.com increased 60 percent from the first week of March to the second, the outlets said. Hearst Magazines sites attracted 33 percent more readers, compared with last year. And the number of unique visitors to Vanity Fair soared 44 percent last week, thanks, in part, to a tweet by President Trump attacking the magazine’s coronavirus coverage.

The audience for Verizon Media sites, including HuffPost and Yahoo News, has increased by nearly 80 percent in recent days, said Guru Gowrappan, the chief executive of Verizon Media, in an email. BuzzFeed News’s traffic was up 44 percent for the 10 days before last weekend, according to a spokesman.

Matt Murray, the editor in chief of The Journal, expressed concern that the paper’s journalists might overdo it as they chronicle the pandemic and its economic fallout. “They’re all eager to be on a big story and work hard, which is great, but I don’t want them to work 100 hours a week,” he said. “We need them to get through the next couple of months and not burn out.”

The surge in page views has been good for the news business, at least in the short term. There were 57.5 percent more new subscriptions to U.S. news sites last Sunday than on an average Sunday, according to the media software company Piano. The Journal, Bloomberg and The Daily Beast said they have signed up a much greater number of new subscribers than usual in recent weeks.

“People are really desperate for factual, good information and analysis,” said John Micklethwait, the editor in chief of Bloomberg News. “My guess is a lot of the quality end of journalism has done well, because suddenly it matters enormously what the facts are.”

The throng of readers has not fully restored the ailing news business, however. Some media companies have had to cancel or postpone the events they had come to depend on for revenue.

Other planned gatherings will take place online, including a health care conference sponsored by The Journal that was to take place next week in Washington. A live show of Slate’s “Dear Prudence” advice column scheduled for the Bell House in Brooklyn next month will be streamed from the living room of the columnist Daniel Mallory Ortberg. An Eater wine club event will be virtual.

Once-reliable advertisers — hotel chains and airlines among them — have cut back or canceled campaigns. The New York Times Company advised investors this month that “uncertainty and anxiety about the virus” had led to downward adjustments of advertising revenue expectations.

Nicholas Thompson, the editor in chief of Wired, said the magazine would “take a big hit.”

“But our view is, we’ll worry about that next,” he added “Right now, we’re worried about getting the best, most truthful information out there.”

The outlook is worse for local news websites, daily newspapers in midsize cities and weekly papers across the country, which typically rely on now-struggling neighborhood businesses for the bulk of their advertising.

“We are seeing some cancellations,” said Steve Yaeger, the chief marketing officer of The Minneapolis Star Tribune. “We’re also seeing some new spending, but it’s not offsetting the cancellations. It’s a bit of a shock to the system.”

There have been a few bright spots. Jason Wagenheim, the chief revenue officer of Bustle Digital Group, said his company has received an unusual number of ad requests from streaming video, baby care and food companies.

“Everyone’s home on their couch, eating,” he said.

Many news organizations have bet on podcasts to fill the void. Slate’s coronavirus-related podcasts have received more than four million downloads, according to a spokeswoman. A Vox Media executive said its podcasts have been downloaded 50 percent more than usual, with newsy shows like “Today, Explained” and “The Weeds” especially popular.

Last Thursday, Katherine Wells, the executive producer of podcasts at The Atlantic, suggested a new daily show during a call with Adrienne LaFrance, the publication’s executive editor. The next day, the first episode of “Social Distance” was ready. Daily episodes often feature James Hamblin, a staff writer who is a medical doctor.

Some reporters have switched beats. A couple members of Politico’s agriculture and trade team are now covering the pandemic, Ms. Budoff Brown said. The Daily Beast’s education and gender reporters are digging into health and medicine stories, Mr. Shachtman said.

But with a story so pervasive, others have been able to take what the grim news cycle gives them and fit it into their usual areas of coverage. Joanna Stern, a personal technology columnist at The Journal, has included a work-from-home tip in Mr. Murray’s morning newsletter, “The 10-Point.” The Romper, a Bustle site for millennial mothers, has weighed in on the best disinfectants and how to explain the pandemic to children.

There is still plenty of demand for non-coronavirus-related material. Recent trending videos on the animal site The Dodo have included one about a sea turtle making its way back to the ocean and another about a monkey and a dog who are pals.

“I really want to know everything going on and the right information to protect my family and employees,” said Ben Lerer, the chief executive of Group Nine Media, the company behind The Dodo. “And then I also want to unplug.”