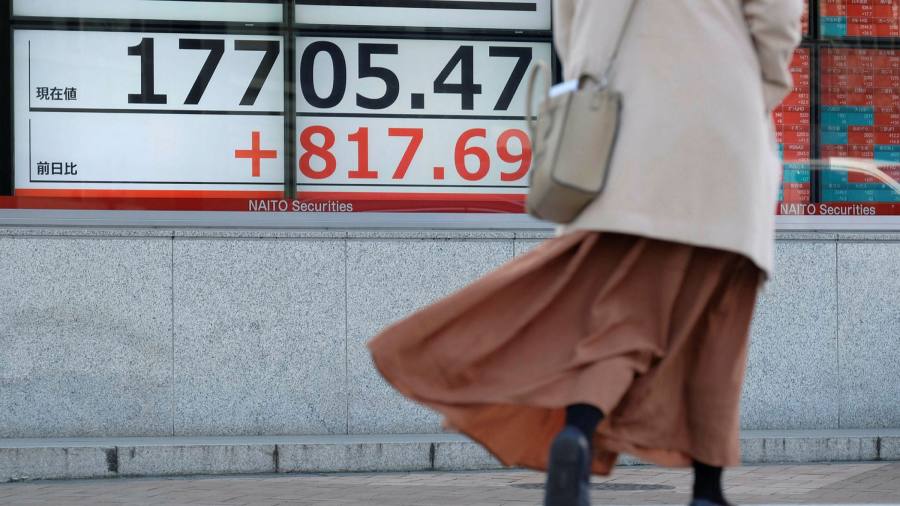 Market turbulence, an old investment proverb and orders to work from home due to coronavirus have lured record numbers of Japanese to open new online trading accounts and dive into the stock market — in many cases for the first time.

The surge of new accounts in March — four times the average monthly rate in the case of Matsui Securities — has brought as many as 250,000 new investors into the market across Japan’s five largest online trading houses. Most of the new account holders, said brokers, are aged between 30 and 50 years old.

The temptation of bargain prices in Japan’s whipsawed stock market — the benchmark Topix is down 20 per cent this year — has also prompted existing online brokerage customers to revive dormant accounts, triggering a deluge of phone calls to helplines from customers asking how to reset long-forgotten passwords.

A spokeswoman for SBI, Japan’s largest online brokerage, said it expects new accounts to hit a record high of between 120,000 and 130,000 in March, or several times the monthly average.

“Because the market dropped off a lot, there were a lot of people who saw it as an opportunity.

Mizuho Securities strategist Masatoshi Kikuchi said a number of market adages had reasserted themselves during the volatility caused by the coronavirus pandemic.

One belief among retail investors in Japan is that amateurs can beat professionals over a longer timeframe. That made them natural buyers during the huge falls earlier in March.

“Japanese individual investors have been markedly contrarian, having not believed in the ongoing bull market for some time,” said Mr Kikuchi.

Oki Matsumoto, the chief executive of Monex, said the online trading platform expected about 8,000 new accounts will have been opened by the end of March — roughly twice the average monthly pace. The company has about 2m customer accounts, but only half of them trade regularly.

However, he added that many traders on the platform were still cautious following the market sell-off.

Over the past two weeks, retail investors’ stock trading volumes have been about two or three times higher than average, according to three brokerages. During that time the Nikkei 225 — the stock index preferred by retail traders — has swung wildly between losses and gains.

That level of volatility, one brokerage head said, has convinced traditionally conservative Japanese that there is money to be made in the chaos.

Local investors in recent weeks have also piled into so-called “hibernation” stocks, which reflects a theory that the spread of the deadly coronavirus may convince corporate Japan to make its structures more accommodating to telecommuting.