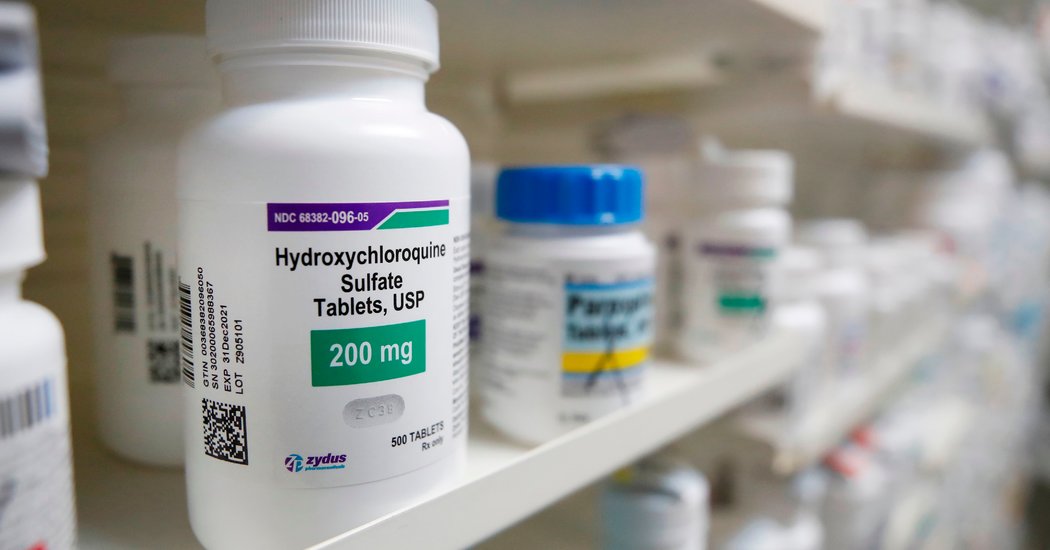 For Michelle Weaver, hydroxychloroquine has been a miracle drug.

Her daughter Kaitlyn, 13, suffers from juvenile inflammatory arthritis and an immune deficiency, which cause excruciating joint pain that often leaves her bedridden or reliant on a wheelchair to get around. But when Kaitlyn started using hydroxychloroquine in January, her debilitating pain went away and she was able to walk again. “This drug is the difference between Kaitlyn getting up every day and having a somewhat normal childhood and her being in the hospital,” said Ms. Weaver, who lives in Alabaster, Ala.

But when Ms. Weaver went to renew her daughter’s prescription in March, her pharmacist told her the drug was no longer available. Demand for hydroxychloroquine had soared following reports that the drug, also taken to treat malaria, could treat coronavirus patients, a claim President Trump had promoted at a White House briefing on March 19. Ms. Weaver called a dozen pharmacies to no avail, at one point cutting her daughter’s daily dose in half to ration their supplies, before finally locating a bottle more than 100 miles away.

Now she lives in fear that she will not be able to find the drug when they need to refill the prescription. “I really worry this is going to be a strain on our family trying to keep her on this medication,” said Ms. Weaver.

A new study published in JAMA on Thursday underscores the challenges that families like Ms. Weaver’s have faced since hydroxychloroquine and a related drug, chloroquine, were widely touted as breakthrough treatments for coronavirus patients. The drugs have long been used to treat autoimmune diseases like lupus and rheumatoid arthritis. But now many patients have been scrambling to find them because of shortages.

The new study analyzed nationwide prescribing patterns across the country from mid-February through April using data from 58,000 pharmacies. It found that in mid-March, prescriptions for a short-term supply of the drugs soared to 45,858, up from 2,208 during the same period in 2019, a nearly 2,000 percent increase. “This was a really stunning finding,” said Dr. Haider Warraich, the lead author of the study and a cardiologist and researcher at Brigham and Women’s Hospital and Harvard Medical School.

While the surge began to decline somewhat the following week, the heavily increased demand continued through April. All told there were almost a half-million more prescriptions for hydroxychloroquine and chloroquine filled between mid-February and late April compared to the same period in 2019. The New York Times reported the intense demand for the drugs last month, which appeared to be driven in part by doctors writing prescriptions for themselves and their families.

Several studies have shown that people with Covid-19 who were given the drugs were at higher risk of heart rhythm problems and were more likely to die, and last month the Food and Drug Administration issued new safety warnings cautioning that they should be used only in clinical trials or in hospitals where patients can be closely monitored. “We have a system in which it’s very easy to prescribe a medication off label,” or for a medical condition for which a drug has not been specifically approved, Dr. Warraich said. “It’s much harder to enroll a patient in a clinical trial. But in the end that is what’s going to help us fill this data-free zone with the data that can guide us.”

As part of the new study, Dr. Warraich and his co-authors looked at whether the pandemic also affected prescribing patterns for 10 of the most widely used drugs in America, which revealed some striking trends. Prescriptions for chronic conditions such as high blood pressure, high cholesterol, heart disease, acid reflux, thyroid disorders and depression spiked in early to mid-March and then fell sharply from late March through April. Prescriptions for the cholesterol-lowering medication Atorvastatin, for example, rose 30 percent in mid-March and then by late April were down almost 10 percent compared to the same period in 2019.

Dr. Warraich said that the trend likely reflected doctors and patients preparing for the pandemic by stockpiling medications that are routinely use for chronic conditions. But the number of people starting on these medications for the first time likely fell once hospitals and clinics shifted their focus to coronavirus patients, as evidenced by the sudden drop in prescriptions in late March and April.

Two drugs that showed a very different trend were amoxicillin, an antibiotic used to treat bacterial infections, and hydrocodone-acetaminophen, an opioid-containing painkiller that is commonly sold under the brand name Vicodin. Prescriptions for both declined in March and then plummeted in April. Dr. Warraich speculated that fewer painkillers were prescribed because of drops in elective medical procedures and visits to the dentist. Antibiotic use may have fallen in the past few months as doctors became more likely to suspect coronavirus, rather than bacterial infections, among people with cold and flu symptoms, Dr. Warraich said, or fewer people with symptoms may have been visiting their doctors because of concerns about catching the virus.

Dr. Warraich said the most encouraging finding was that compared to other medications there were no substantial drops in prescriptions for the two most popular groups of blood pressure medications, known as ACE inhibitors and ARBs. When the pandemic began, some scientists theorized that these classes of drugs could make people more susceptible to contracting the coronavirus or developing severe symptoms. Those concerns have since been dispelled by recent studies. But experts still worried that many patients might have been scared into stopping their blood pressure medications. The new study suggests that did not happen.

“That was probably the most reassuring part of this analysis, which was that there was no major drop off in people having these medications prescribed,” Dr. Warraich said.

After peaking in mid-March, prescriptions for hydroxychloroquine and chloroquine declined substantially but mostly remained elevated above their normal levels throughout April. To help ease the demand, some states issued strict new rules, such as requiring that doctors prescribe the drugs only for conditions that they have been proven to treat. Patient advocacy groups like the Arthritis Foundation and the Lupus Foundation of America sent letters to state pharmacy boards, the White House, Congress, the F.D.A. and other agencies asking them to help ensure that patients with chronic conditions could access the drugs.

“We have a lot of heartache in our patient population over the barriers they had in filling their prescriptions,” said Guy Eakin, the senior vice president of scientific strategy at the Arthritis Foundation.

Maureen Stewart has used hydroxychloroquine since 2005 to treat lupus. Her local pharmacy in Pittsburgh told her they were having trouble with their supply chain and needed to use two different manufacturers to fill her last prescription in late March. Without the drug, her joints become inflamed, especially her knees and her ankles, causing pain and swelling that make it difficult for her to walk. She is scheduled to get her next prescription in June and is anxious about it.

“I’m concerned about going for my next refill because of all the publicity,” she said. “I worry what’s going to happen if I can’t get it.”