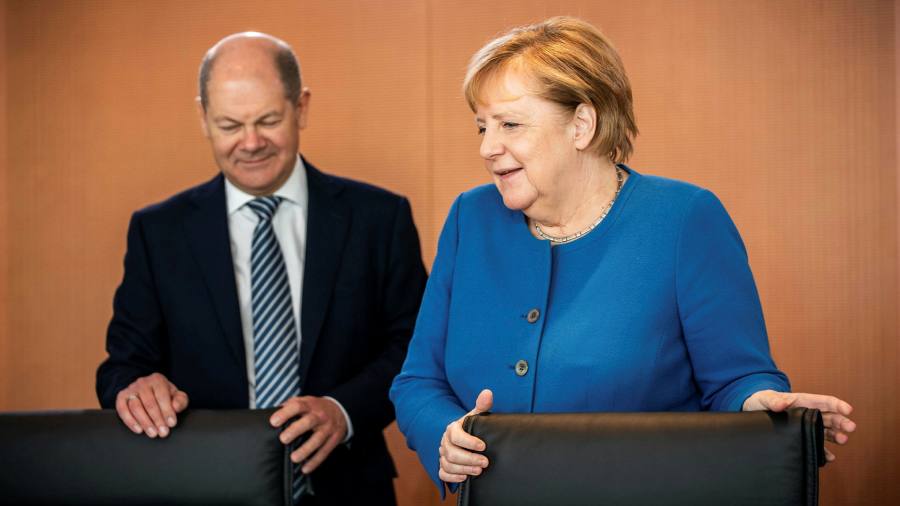 Nine years ago, Michael Hüther, one of Germany’s leading economists, poured scorn on the idea that the eurozone could issue common bonds to deal with the burgeoning sovereign debt crisis.

Pooling liability meant “giving up your national fiscal policy”, the head of the German Economic Institute in Cologne said. Such “eurobonds” would act as a “negative incentive”, rewarding southern European countries for their lack of budgetary discipline.

Yet with the onset of the coronavirus pandemic, Mr Hüther has had a dramatic change of heart. Late last month he was one of seven prominent German economists who called on eurozone governments to issue €1tn in joint “European crisis bonds” to help the countries worst affected by coronavirus.

Eurozone member states should be “spreading the costs of the crisis as broadly as possible”, they said. “The bonds would send a strong signal that Europe stands together” in tackling the aftermath of a disease that will plunge much of the continent into recession.

Mr Hüther’s near-Damascene conversion is part of a broader trend in Germany, as this crisis forces politicians, economists and academics to reassess some of their most cherished principles and throw overboard beliefs that once seemed sacrosanct.

The first casualty of the crisis was the “schwarze Null” or “black zero”, the doctrine of no new borrowing relentlessly pursued by Angela Merkel’s government for much of the last decade that delivered six years of budget surpluses.

This was abandoned in spectacular fashion last month when Olaf Scholz, finance minister, unveiled a €150bn emergency spending plan largely financed by new debt and a suspension of the country’s constitutional ceiling on budget deficits.

Some think that the traditional German resistance to eurobonds could end up going the same way if the crisis escalates. “Germany’s traditional red lines might end up not so red any more,” said Lucas Guttenberg, deputy director of the Jacques Delors Centre, a think-tank.

So far, the red line on common debt issuance is holding. Germany has always argued the idea would violate the “no bailout” clause in the EU treaty, which says that no EU country should be liable for the debts of other members.

When Luxembourg and Italy revived the concept in December 2010, at the outset of the eurozone sovereign debt crisis, Ms Merkel shut the debate down. “Communitising interest and risks is not going to help us,” she said. First there needed to be more “cohesion and consistency” in the eurozone countries’ economic policies.

The chancellor has stuck to her guns. In 2012 she said there would be no eurobonds “as long as I live”. After nine European heads of government wrote a joint letter last month saying the EU needed to “work on a common debt instrument”, she said pointedly that that wasn’t “the opinion of all member states”.

Ms Merkel’s Christian Democratic Union party remains opposed. Eckhardt Rehberg, the CDU’s senior budget spokesman, said the EU already had enough tailor-made tools for emergencies like this, such as the European Stability Mechanism, the eurozone’s crisis-fighting fund. With eurobonds, “we’re talking about a completely new instrument, so whatever happens, the path to issuing such common debt will be very long and complicated”.

Mr Rehberg said Germany’s constitutional court had made clear that such an innovation would need the prior approval of the Bundestag, and a two-thirds majority might be required for such a fundamental change — a nigh-impossible hurdle.

But even in the CDU there are voices in favour of a rethink: MP Roderich Kiesewetter said the joint bond issued by the European Community during the oil crisis in 1974 could be a “model for today”.

Meanwhile many Social Democrats, the junior partners in Ms Merkel’s coalition, think the same way. Nils Schmid, the SPD’s foreign affairs spokesman, said coronabonds would help show fellow member states “that we’ve learnt from the eurozone debt crisis”. He added: “Then a lot of countries felt abandoned, and the aftermath of that is still being felt.”

For opposition MPs, the case for a new debt instrument is even stronger. Franziska Brantner, Europe spokeswoman for the Green party, said it was in Germany’s own self-interest. “We can’t revive our economy after this crisis when half the single market is no longer functioning,” she said. “It’s an existential issue.”

The debate does not just run on party lines, either. Last week the Council of Economic Experts, which advises the Merkel government, found itself split on the issue. The council’s chairman, Lars Feld, voiced his scepticism about the concept of coronabonds, saying mutualised debt could put pressure on the public finances of smaller countries like the Netherlands, “which have less scope to be liable for others’ debts” than, say, Germany.

Mr Feld’s colleague on the council, Achim Truger, an economics professor at the University of Duisburg-Essen, begged to differ. “What counts is sending out a clear signal, and that is that financing is secure and the states stand together,” he said. “The government would be well advised not to reject these common solutions out of hand.”

Mr Hüther, meanwhile, has defended his change of heart. “Unless we can come up with a common crisis bond, I see a grim future for the EU,” he told the German daily Tagesspiegel. “It’s not about financing dams in central Italy. It’s a question of life and death.”