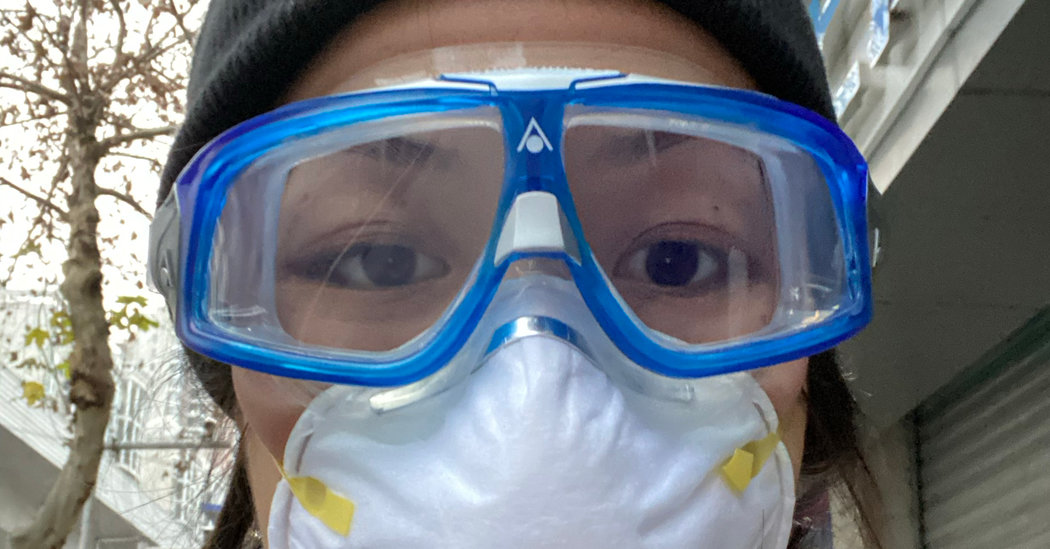 Before the pandemic, my friends called me “the empress,” a joking reference to my last name. But these days, they have begun referring to me by another, slightly less esteemed royal moniker: I am now the Quarantine Queen.

That’s because in the last three months, I have completed four rounds of quarantine in four cities, on both sides of the Pacific Ocean.

Like many others, I passed the time by dialing into Zoom calls and bingeing on reality television. But along the way, I also rode the wave of the coronavirus pandemic. Each city where I idled — San Diego, Beijing, Los Angeles and Taipei — offered a window into the different ways in which governments were grappling with the virus.

Some, as we now know all too well, were more successful than others.

It all began in late January, when I rushed from Beijing, where I was based as a reporter covering China, to Wuhan, where the outbreak first exploded. The city was in its second week of lockdown. We spent much of our time visiting hospitals, leaning in — probably closer than we should have — to interview sick residents who were almost too weak to talk.

Every night, I fielded panicked calls from my parents in California, who seemed to always have a new, dubiously sourced tip for warding off the virus: Turn off the air conditioning! Only eat cooked food! No fruit!

So it was a relief to all when I boarded the last State Department-arranged evacuation flight out of Wuhan. At the time, there were only 12 confirmed cases in the United States. Upon landing at Marine Corps Air Station Miramar in San Diego, I tapped out a text to my family: “I’m so glad I’m American.”

I was grateful. Lodging and meals were provided for free. Workers in face shields made daily rounds to take down our temperatures. Each day brought a new surprise: a Marine band performance, Girl Scout cookies and, more puzzlingly, condoms. #YOLO, I guess.

But there were signs of the impending disaster. Face masks were not required. And though we were confined to one area of the base, we were still permitted to intermingle. At our daily meetings, officials from the Centers for Disease Control and Prevention batted away concerns about asymptomatic transmission.

After having seen the frenzied rush to procure masks in China, the lax guidelines struck me as odd. But these were the world’s top experts, I reminded myself. They seemed confident.

Looking back, those were the first red flags.

Still, many of us continued to wear masks. And anyway, I mostly stayed in my room — even more so after two evacuees on our base tested positive for the coronavirus.

At the end of the two weeks, we graduated. We posed for photos. We tossed our masks in the air in place of mortarboards. We took a bus to the San Diego airport, where we were met by a scrum of reporters. It was a sunny day; the virus felt far away. I took off my mask and disappeared into the crowd.

In late February, I flew back to Beijing.

By then, the peak of the epidemic had passed in China. I flew through Seoul, thinking it would be a relatively safe route. But just before my flight, an outbreak erupted in South Korea, and suddenly that country had become a virus hot zone.

I was nervous. My layover had been less than two hours long. But officials in China are not known to appreciate such nuances, particularly during times of emergency.

Not long after landing, I registered at the local police station, as is required for all foreigners. Sure enough, within hours I got a message. The local authorities knew about my Seoul layover and wanted to put me in state-supervised quarantine, possibly at a government site. I pushed back, trying to persuade them that I was not at risk.

In the meantime, I completed a second round of self-confinement at home. I only left a few times to walk the dog — always with a mask on.

I never heard back from the authorities.

To me, it was China’s response to the epidemic in a nutshell: effective if heavy-handed, and not always fail-safe.

Early one morning in March, I woke up in Beijing to a barrage of frantic messages. The Chinese government was expelling a group of American journalists, myself included.

Moving countries during a pandemic is not easy. Walls were going up fast in the region and international flights were being canceled every day. In the end, I left Beijing, my home for the past eight years, and took one of the last flights out, back to California.

Walking through the empty terminals of Los Angeles International Airport was surreal.

In February, coming back to California had felt like escaping to a safe haven. But since then, the virus had sickened over 244,000 people in the United States and killed more than 5,900.

The official guidance on masks was all over the place. Testing was in shambles. Discrimination against Asian-Americans was on the rise. Though I had my temperature checked at the airport, someone forgot to collect the form that I had filled out with my local contact information and health status. I didn’t realize it until later.

For days, I holed up in a lovely Airbnb cottage in Venice for my third round of quarantine. It was hard to imagine the virus hiding among the palm trees and pink bougainvillea. But memories of what had happened in Wuhan were more than enough to keep me inside.

In mid-April, I moved to Taiwan’s capital, Taipei, my new base for reporting on China.

Almost immediately, I saw why Taiwan had been lauded for its successful response to the virus.

Before I could leave the airport, I went through multiple checkpoints manned by Taiwan C.D.C. workers in yellow vests. They recorded my temperature and health and travel history. I got a Taiwanese phone number — and had to prove on the spot that it worked.

I went straight to my hotel, where I was met outside by a worker in a protective suit, mask and goggles. He quickly got to work, disinfecting my suitcases. Then he summoned the elevator and said goodbye. He was the last human being I saw for two weeks.

The room was clean but small. Every day, I reported my temperature to the hotel and my health status to the Taiwanese government. Three times a day, a hotel employee came by to hang a takeout meal on a plastic hook that had been affixed to the door.

The whole process was thorough and efficient. But to be honest, though I may have been the “Quarantine Queen,” by the end I was faltering. In the last week, I struggled to get out of bed. I craved sunlight. For instant comfort, I ordered from Din Tai Fung (three times). “Don’t be so hard on yourself,” my fiancé kept telling me over FaceTime.

I am lucky, though. Taiwan had moved quickly to impose travel restrictions, screen visitors and deploy protective gear. As a result, the island as of Wednesday had only 440 confirmed cases and seven deaths, despite its proximity to mainland China. Life here has continued mostly uninterrupted, though masks and temperature checks are now the norm.

After two weeks, I was finally released.

On my first night out on the town, I put on a dress. I put on makeup. I walked through a park. I bought ridiculously expensive hand soap — after talking to a real, live saleswoman! I wandered through a maze of shopping mall food courts and marveled at the sight of people laughing and eating together.

It was amazing. It all felt so normal.

Except one thing was different. Before the pandemic, I’d been accustomed to packing my bags every few weeks for a reporting trip. Right now, though, I’m happy to just pause here for a while.