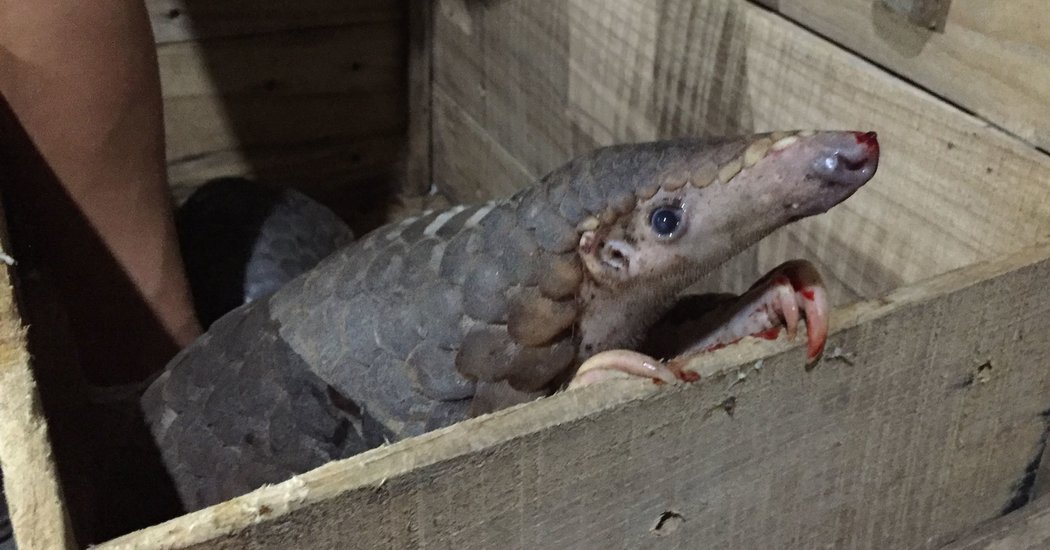 The spread of the new coronavirus has stalled economic activity, halted travel and locked down some cross-border trade. Another sector that’s feeling the pinch is criminals trafficking illegally in poached wildlife.

“Security is too heavy at the border. Products can’t go out,” said a person in Vietnam involved in the trade. That person spoke to an undercover investigator who was involved in a new report on the state of the illegal wildlife trade.

The pandemic has prevented organized criminal gangs in Southeast Asian countries from moving large quantities of ivory and pangolin scales into China. But any limits on the illegal wildlife trade are likely to be temporary.

“There’s too much money to be made from these products, and there’s too many people involved for this to have a significant long term impact,” said Sarah Stoner, a co-author of the report and director of intelligence at the Wildlife Justice Commission, an international foundation based in The Hague, Netherlands, that works to dismantle illegal wildlife trade.

She and other experts say that while the coronavirus’s limits on travel and business could be an opportunity for law enforcement to disrupt criminal networks, the pandemic’s economic toll could attract more people to the trade.

“We are tracking significant amounts of new trafficking activity in multiple countries, which seems to indicate that traffickers are both still very much in operation and also actively seeking ways to adapt and thrive in the new normal,” said Tim Wittig, the head of intelligence for United for Wildlife, a nonprofit led by Prince William to fight wildlife trafficking.

In a report published earlier this month, Dr. Wittig also found that temporary disruptions to the trade would be fleeting. “Traders have incentive to move product as soon as is feasible,” he said.

The Wildlife Justice Commission maintains an intelligence database of thousands of traffickers and dealers around the world. Undercover investigators working with the commission keep regular contact with a number of these criminals. The commission’s new report summarizes conversations, from January through April, between investigators and around 20 people involved in the trade in Vietnam, Laos, Cambodia, Thailand, Malaysia, India and Mozambique.

These are desperate times for illegal wildlife traffickers, the conversations showed.

Vietnam closed its border with China on Feb. 1. At first, Ms. Stoner and her colleagues found, wildlife traders mostly dismissed this development and still guaranteed door-to-door delivery to their customers — something normally included in the price of everything from ivory to tiger parts. Traders repeatedly assured customers that “delivery will be fine after a few days.”

By the end of February, things had changed. “You can get the products here,” one Vietnamese trader told the investigators, “but if you want to send them to China, you could be waiting for months.”

Tighter security and even closed borders have left some traders offering deep discounts on their illegal goods, while others have temporarily frozen operations. Retailers in Southeast Asian countries also fear that the lack of Chinese tourists — their primary customers — will put them out of business.

Many traders work with corrupt airport personnel to clear their products through customs. But with flights canceled and diverted—and security increased—trusted smuggling routes are no longer guaranteed.

In early March, to prevent too many passengers from being quarantined in one place, a flight from South Korea destined for Ho Chi Minh City in Vietnam was diverted to Can Tho, a city 100 miles to the south. Officials there discovered 11 rhino horns in checked luggage.

The case highlighted that criminals can no longer guarantee their illegal products will arrive to their intended destination, Ms. Stoner said.

Not all illegal trade has ground to a halt. Throughout March and April, Chinese authorities have continued to seize large shipments of rhino horns and pangolin scales crossing into China by land from Vietnam. Traffickers told investigators that they are closely following developments at the border. Many are eager to offload their growing stockpiles.

In Africa, on the other hand, the virus may wind up facilitating rather than stalling illegal activity. Investigators learned that several heads of poaching gangs in Mozambique are planning to take advantage of reduced ranger patrols and the lack of tourists in Kruger National Park in neighboring South Africa. Poaching bosses can also expect a glut of new recruits in the coming months, said Vanda Felbab-Brown, a senior fellow at the Brookings Institution in Washington, D.C. “Because of Covid’s vast economic impacts, a lot of people will be driven into many forms of illicit economies.”

Dr. Felbab-Brown added, the coronavirus will “devastate much of conservation funding” in Africa, further reducing rangers’ abilities to ward off poachers.

While conservationists have celebrated bans proposed by China and Vietnam to limit consumption of wild animals, Ms. Stoner pointed out that these measures are unlikely to have any effect on illegal wildlife traffickers. “We’re not talking about what’s on sale at markets,” she said.

Governments around the world should also prepare for an upsurge in commercial-scale wildlife trafficking when borders reopen, Ms. Stoner said.

“We’ve heard a lot of conversations about traders feeling like everything will be opening up soon,” she said. “We shouldn’t allow organized trade to flourish while we’ve got our eye on this other problem.”

Dr. Wittig believes that the pandemic presents a watershed opportunity for ending industrial-scale animal trafficking. The momentary disruption to the movement of illegal goods, for example, gives law enforcement a chance to seize huge stockpiles of contraband, rather than one-off shipments.

More important, global society might take advantage of the now widely recognized link between wildlife trade and public health, Dr. Wittig said. The social stigma around the purchase and consumption of illegal wildlife products could grow, and countries eager to avoid becoming the origin of another pandemic would be motivated to investigate, arrest and prosecute wildlife criminals.

“Traffickers are currently constrained and suffering like the rest of us, and if we take what is really an extraordinary opportunity to exploit those vulnerabilities, we can make huge inroads in ending the illegal wildlife trade,” Dr. Wittig said. “We actually have an opportunity to win here.”