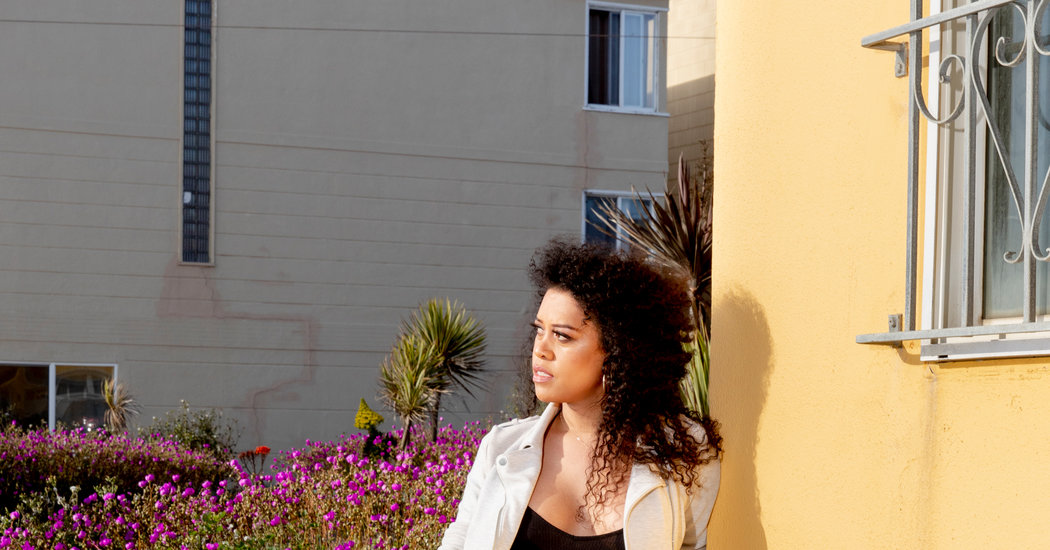 This article is part of our latest Pride special report, featuring L.G.B.T.Q. voices on the challenges and possibilities of these troubled times.

When Aria Villajin was a teenager, her father made clear his feelings for gay and transgender people.

“He always called L.G.B.T. folks ‘it.’ He didn’t address them as pronouns. They were ‘its.’” Ms. Villajin, now 33, said. “If he found out one of his sons were gay, he would make them change their name.”

Ms. Villajin presented as male then. When her mother was deported to the Philippines, her black father moved the family to a conservative, white Sacramento suburb. At 18 she left for San Francisco, but even there life was not easy, and without support, she dropped out of college.

Ms. Villajin’s experience of rejection and struggle is all too familiar in the transgender community. While the L.G.B.T.Q. community at large has seen greater acceptance, transgender people have not experienced the same gains.

The Trump administration years have been especially turbulent. A landmark Supreme Court ruling this week banned workplace discrimination against gay and transgender people, but last week the administration eliminated federal protections against discrimination in health care for transgender people and barred them from military service except under certain circumstances.

Inequity has been even worse for transgender people of color, who face higher rates of poverty, homelessness, violence and H.I.V. infection, research has shown.

“They’ve been discriminated against being able to find formal employment because of their transition, how they look,” said Felipe Flores, founder of the Queer and Trans People of Color (QTPOC) program at Strut, the San Francisco AIDS Foundation’s health and community center.

As the coronavirus pandemic ravages the country, there are concerns that an already marginalized group will be further left behind, according to interviews with more than a dozen experts who work with the transgender population.

“Transgender people are going to be more harmed by the impact on the economy than other L.G.B.T. people,” said Rebecca Rolfe, executive director of the San Francisco LGBT Center. “People who are most marginalized are going to be most impacted. They’re going to be the last hired, the lowest paid.”

The center runs the Trans Employment Program, which over the past 12 years has helped more than 1,000 transgender people with job assistance.

The obstacles — even before Covid-19 — were daunting. While studies show that white gay men experience levels of poverty similar to heterosexual men, transgender people of color are six times more likely than the national average to be unemployed, and “five times more likely to have incomes of less than $24,000,” Ms. Rolfe said.

Before the pandemic, many transgender people of color who failed to find traditional jobs turned to sex work, according to advocates, and some have continued despite the virus risks.

They “are still engaging in sex work because that’s still their primary form of income,” said Mr. Flores.

“They can’t negotiate social distancing methods because they still have to generate income,” Mr. Flores said. “They don’t have access to other forms of income.”

Naomi Wright, who does community outreach for the San Francisco LGBT Center, said a client who was a sex worker became ill in early March with Covid-19 symptoms.

“Not only could they not afford going to the hospital, but they didn’t have health insurance,” Ms. Wright said.

The exact impact of Covid-19 on the L.G.B.T.Q. community is not known, at least in part because state and federal agencies are not collecting information. California, for example, did not collect data about sexual orientation and gender identification in pandemic statistics.

But another source is sounding the alarm.

The national Trans Lifeline handles 75,000 calls annually from transgender people, connecting them with transgender operators for help and conversation. Since the pandemic calls have increased and taken on new urgency.

Organizations are rallying to intervene.

The Alliance Health Project, which provides mental health services to San Francisco’s L.G.B.T.Q. community, has shifted to provide therapy by video chat or phone, and is offering phones to homeless clients.

In Los Angeles the “Covid-19 Mutual Aid Fund for LGBTQI+ BIPOC Folks” on GoFundMe raised more than $253,000; it was distributed, mostly nationally, to more than 2,500 in need.

“Trans, gender nonconforming, nonbinary people of color were going to fall through the cracks in this moment,” said Amita Swadhin, the fund’s organizer.

Those individual grants are small, generally $100, but such gestures can have an outsized impact for transgender people, who often feel isolated.

Sammie Ablaza Wills, a 25-years-old person who identifies as nonbinary (and uses the pronouns they and them), grew up in poverty in Las Vegas and now lives in the Bay Area. “My teachers would help bring food for me to eat at school because they knew I didn’t have much access to food,” they said.

Those kindnesses led to a scholarship at Stanford University and a job as director of API Equality — Northern California, a group fighting discrimination of L.G.B.T.Q. Asian and Pacific Islander people, a problem exacerbated by a rise in anti-Asian bigotry during the pandemic.

“What the Covid-19 moment is showing us is that the inequality that existed before the crisis is only heightened and magnified during the crisis,” they said.

Ms. Villajin is also helping during the pandemic. After her initial struggles as a teenager, she’s now an advocate for people with mental health issues. And as the drag performer Pearle Teese she curates Trans Voices, a community-building event at Strut.

“I think a lot of us need some kind of help and I am someone who needed that help when I was younger and I didn’t have it,” she said.