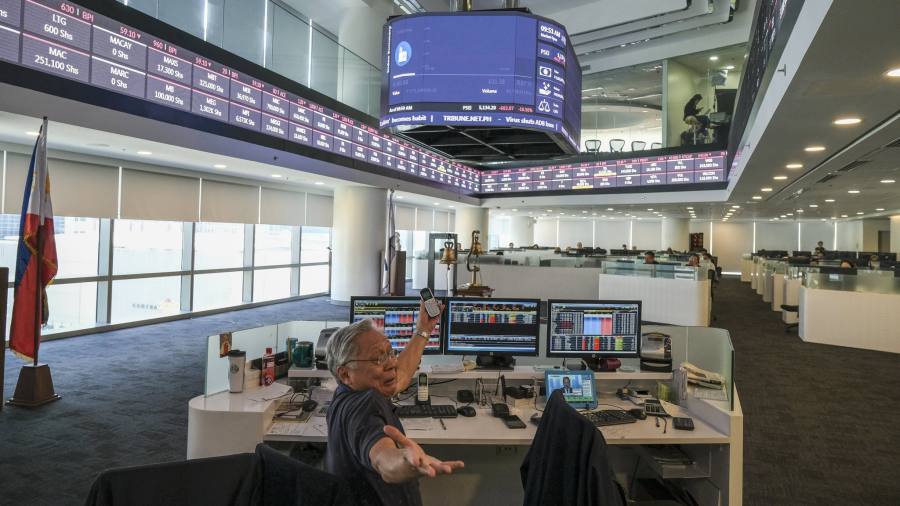 The Philippines has halted all stock, bond and currency trading until further notice, becoming the first big country to shut its financial markets because of the coronavirus pandemic.

The Manila bourse has been among Asia’s hardest hit by the global markets rout. Last week it hit a circuit breaker meant to curb market volatility after falling 10 per cent for the first time since 2008.

On Friday Carlos Dominguez III, the finance secretary, ordered state pension funds to increase their share purchases by at least doubling their daily average volumes, but shares continued to drop, and the market is down 32 per cent year to date.

Ramon Monzon, the PSE’s chief executive, said the market would remain shut until further notice “to ensure the safety of employees and traders in light of the escalating cases of the coronavirus disease”. The Philippines has reported a sharp rise in coronavirus cases over the past week, with 142 cases now confirmed and 12 deaths.

The exchange announced shorter trading hours of 9am to 2pm on Sunday, a day before saying it would be closing entirely. The prospect of financial markets closing indefinitely has emerged as a possibility in recent days as coronavirus spread worldwide, causing investors to sell shares.

On Monday the S&P 500 fell by 12 per cent, the sharpest single-day drop for the US benchmark index since the crash of October 1987.

After being criticised for its slow initial response to the crisis, the Duterte government has taken more decisive action to stem the spread of the disease in the Philippines in recent days.

On Sunday, the government imposed an “enhanced community quarantine” on greater Manila, where more than 12m people live.

On Monday Mr Duterte ordered the lockdown be extended to all of Luzon island, where nearly half the Philippines’ 105m population lives, until April 13. The directive closed schools and government agencies, banned mass gatherings and allowed only businesses providing basic necessities such as food and medicine to remain open. People seeking to depart the island by air were asked to do so within 72 hours.

“Since the capital and all of Luzon — 60 to 70 per cent of GDP — is locked down, volumes would be very low anyway,” Alvin Ang, professor of economics at the Ateneo de Manila, said of the market closure. “What’s important is for everyone to focus on the challenge at this moment.”