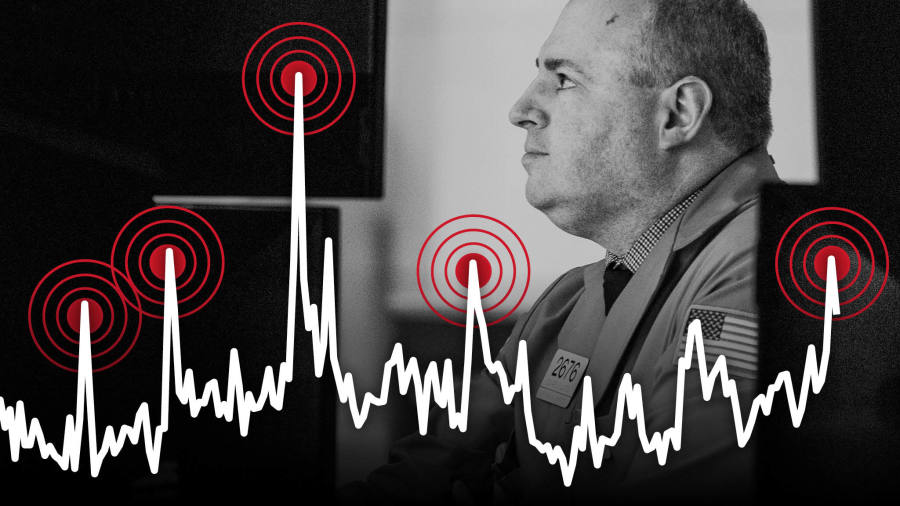 The latest burst of market mayhem has been notable both for its severity and the tranquillity that preceded it.

Consider the Vix index, a gauge that uses derivatives prices to measure investors’ expectations of swings in the S&P 500 over the next 30 days. The index was rooted near a record low of 12 per cent to 13 per cent a month ago before nudging higher — yet still well below its long-term average — as the severity of the coronavirus outbreak became clearer.

But last week the Vix experienced its biggest five-day rise since the bankruptcy of Lehman Brothers. The eruption in the Vix mirrored the biggest stock market sell-off since the financial crisis, as stretched valuations collided with a realisation that a pandemic could tip the global economy into recession.

“It was wild . . . People were just focused on getting through the day,” said one bank trader. “Markets go up an escalator and down the elevator. But that seems to be even more common these days. We have very shock-led markets. You have nothing, and then boom, volatility spikes.”

Markets have always been prone to booms and busts. But the intensity of last week’s rout also reflects a recent phenomenon, where market turbulence evaporates for long stretches, but the market is then rattled by more violent shocks.

Analysts and fund managers say they can see several drivers behind the trend.

Increasing use of options

As bond yields have tumbled since the financial crisis, investors have looked for ways to increase returns. One of the most common tactics has been to write options — a kind of derivative contract — that either surrender some upside for the writer of the option (a call) or protect against downturns (a put). In exchange they get a steady premium from the buyer of the option.

Option-writing strategies were once mostly carried out by specialised hedge funds but they are now much more popular, with even retail investors getting in on the game. Option dealers, usually banks, take the other side of the trades.

Professional dealers try to maintain a neutral position, and constantly hedge their own exposure to these options. In normal times, this can help to stabilise markets. But when markets turn particularly volatile, put options become more valuable very quickly, which forces dealers to sell stock futures — another kind of financial derivative — to protect themselves against losses.

The impact of option hedging on markets is disputed by some analysts, who see it merely as a convenient scapegoat in times of turbulence. But many argue that it was a major contributor to the severity of last week’s correction. JPMorgan estimates that it led to as much as $50bn worth of selling.

The head of one volatility-focused hedge fund compares banks’ option hedging to a rubber band. “Most of the time it reinforces low volatility by stretching and pulling it back in place,” he said. “But if volatility is too strong it snaps.”

Widespread use of ‘value-at-risk’

Almost every bank, asset manager and hedge fund now uses some version of “value-at-risk” — a measure of how much they can expect to lose on any given day — to gauge and adjust their market exposure. The approach was pioneered by JPMorgan in the wake of 1987’s Black Monday crash, and uses volatility as a proxy for risk.

However, using volatility as shorthand for risk means that when markets are calm, traders have carte blanche to buy securities. Conversely, when turbulence erupts, traders are forced to ratchet back their positions, exacerbating the very phenomenon they are responding to.

According to Saker Nusseibeh, chief executive of Federated Hermes’ international business, reliance on models such as VaR is a dangerous thing. “‘Risk’ is getting completely wiped out; ‘risk’ is going to zero and never recovering. ‘Volatility’ is just a measure of how much something goes up and down,” he said. “But the economists want to be scientists, and talked about economics as if it were science, and so investors started to become enamoured of models that are supposed to work all the time.”

Many machine-driven funds that have grown in popularity since the financial crisis try to set their exposures to the market according to the level of turbulence — an approach known as volatility targeting.

For example, if a fund has a 20 per cent volatility target, but the stock market’s current volatility is 10 per cent, the fund would use leverage to double its exposure. If volatility were to jump to 40 per cent — as it did last week — it would roughly halve it.

Most of the time this works well. However, with so much money invested in funds with volatility targets, some analysts fear that their systematic ramping up and down of exposure is actually having an effect on the very input they use.

The leverage and volatility targets can vary from fund to fund, but at the very least they contributed to last week’s mayhem, according to some analysts. Benn Eifert, the chief investment officer of volatility-focused hedge fund QVR Advisors, estimates that such funds probably sold about $150bn of stock exposure in the tumultuous period between February 21 and February 28.

In a normal market environment, all these factors might leave imperceptible footprints. But in times of turmoil they can have a bigger impact because of what traders say is a noticeably different market structure.

Before the financial crisis, big banks accounted for much of the market-making activity on Wall Street. But these days, with the banks hamstrung by tighter rules, high-frequency trading firms such as Citadel Securities and Jump Trading tend to dominate.

They generally do the job better, faster and cheaper than humans, but when volatility rises HFTs are also forced to be more careful, because they have far less capital to play with than the pre-crisis trading desks of banks.

The higher the number of buy and sell orders at each price, the “deeper” a market is said to be. JPMorgan strategist Marko Kolanovic estimates that the depth of the S&P 500 futures market — popular with banks seeking to hedge, and volatility-targeting funds trying to scale their exposure — collapsed by 90 per cent last week, caused at least in part by a retreat of the HFTs.

“When we get a shock it causes a lot of selling, and most of the liquidity is provided by high-frequency traders these days,” said Russell Clark, chief investment officer of Horseman Capital, a London-based hedge fund. “They tend to pull back when markets are volatile, widening their quotes to compensate for the extra risk, and that creates a lot of outsized moves.”

Not everyone is convinced that these technical factors were a major driver of the recent market carnage. Dean Curnutt, the chief executive of Macro Risk Advisors, pointed out that there was an old-fashioned cause — a negative shock to economic growth, this time from coronavirus.

Nonetheless, he said investors had to recognise the mounting evidence of a new era of sudden shocks that was probably driven by forces within the financial system itself. “The periods of calm are calmer, the switch into chaos happens more quickly, and then we snap back to calm again.”