Coronavirus mobile apps are surging in popularity in South Korea 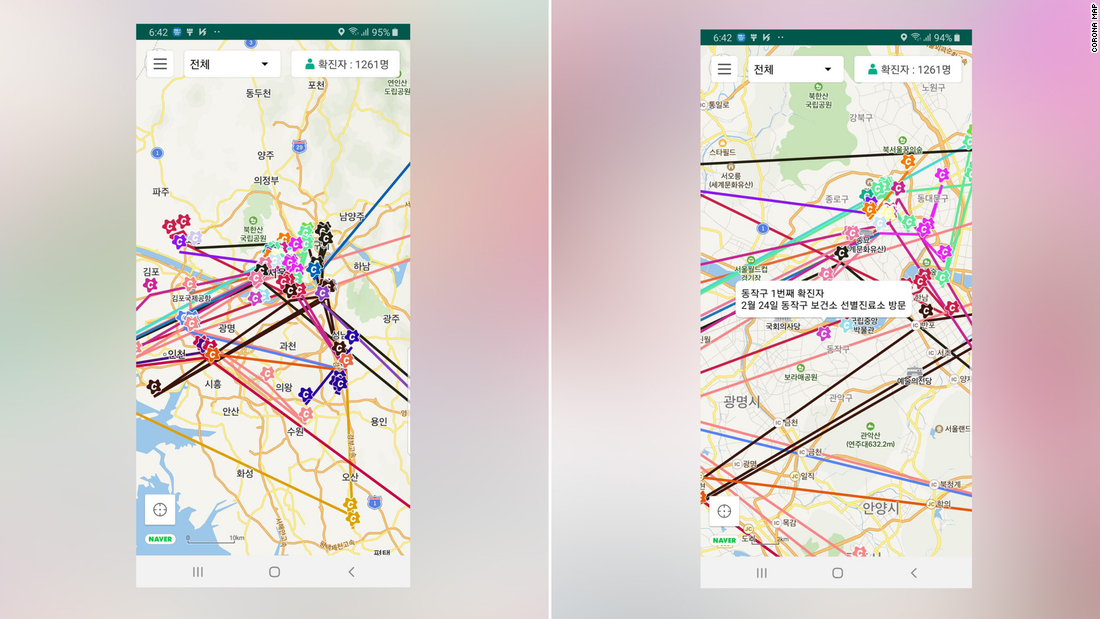 Mobile apps that help track the disease in South Korea ranked as six of the top 15 downloads on the country’s Google Play app store on Thursday. Developers of some apps — which source their data from public government information — told CNN Business that they have been getting a surge in downloads since launching their products earlier this month.

“The installs are increasing about 20,000 every hour,” said Bae Won-Seok, one of the developers of Corona 100m, an app that allows people to see the date that a coronavirus patient was confirmed to have the disease, along with that patient’s nationality, gender, age and where the patient visited. The person using the app can also see how close they are to coronavirus patients.

The app has been installed more than 1 million times since it was launched February 11, according to Google Play. Bae said that a recent surge in downloads, sparked by the escalating number of cases in the country, crashed the application’s server.

Lee Jun-young, the developer of Corona Map, said he made his app because he found the government data hard to understand. Although health officials release locations that show where coronavirus patients have been, the official information isn’t very visual.

“I thought it would be nice to mark them on a map,” said Lee, a former Android software engineer who lives in Seoul.

There have now been more than 83,000 cases of coronavirus recorded worldwide, with infections on every continent except Antarctica. South Korea’s 2,337 cases as of Friday mark the largest outbreak outside of mainland China, where the vast majority of cases have been recorded.

The outbreak has already begun to affect life and business in Korea. Korean Air, the country’s flagship airline, is conducting temperature checks for passengers. Hyundai Motor shut down a plant in the country after one of its employees tested positive for the virus. The hit K-pop band BTS canceled four concerts in Seoul.

One of the developers said he’s even taken more precautions because of what the apps have shown. Bae said he was so concerned about the number of coronavirus cases in his neighborhood that he sent his daughter to stay with her grandparents to reduce the risk of exposure.

Developers who spoke to CNN Business said they are spending their own money to run their apps. The developers behind Corona 100m and Corona Doctor are also asking for donations from users.

“When I think that this app can prevent the spread of coronavirus patients by advising people not to go to certain places … I feel proud,” said Lee, the Corona Map developer. He said he hopes the government develops its own app to pick up from where his project started.