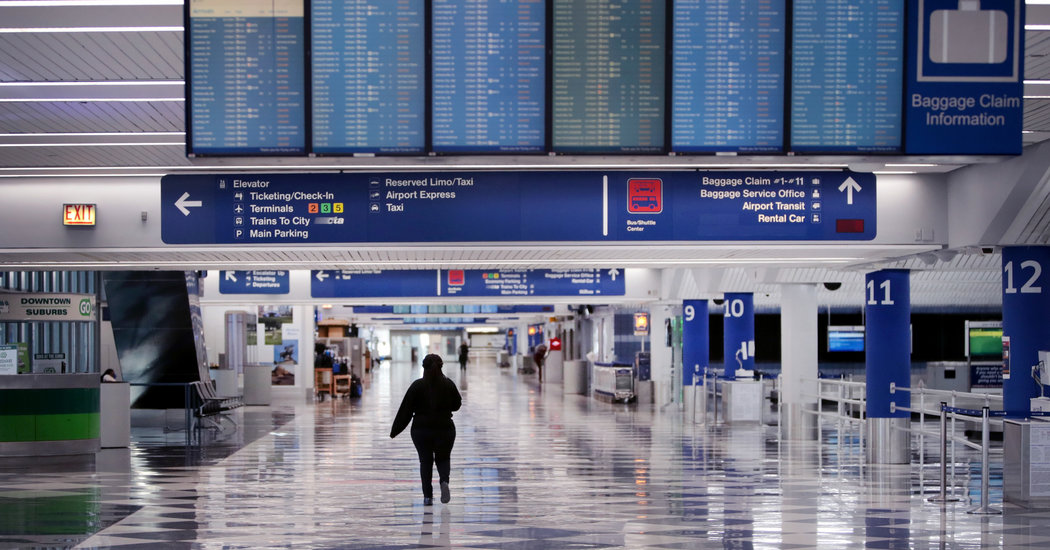 The crisis has created both hurdles and opportunities for entrepreneurs offering new products or services.

“Timing is often out of our control, but our ability to be nimble and keep pivoting, that is essential,” said Marie Forleo, the owner of an online business training program and the author of the book “Everything Is Figureoutable.”

Sometimes even that is not enough, as Heather Howley, the owner of Independent Helicopters, is learning. Her charter air service was thriving for nearly a dozen years, providing aerial inspection and mapping services in New Windsor, N.Y., a rapidly developing area about 60 miles north of New York City. But when drones started making inroads into that business several years ago, Ms. Howley looked elsewhere to keep her company aloft.

“We fill in in situations where a drone can’t go,” said Ms. Howley, the business’s chief pilot. “We do football games, baseball games.” At the same time, she increased her focus on flight training and offered the ground portion of it online. But with large events canceled and flight schools deemed nonessential, the coronavirus pandemic threatens Ms. Howley’s business in spite of her flexibility.

At the end of March, Ms. Howley was worried about how she would survive if the economy shut down for more than a month and projected that even after business resumes, it would be slow.

“We may see another drop in students even after we get back to work,” she said. “We’re still supporting the utility company, but they’re not paying us at the moment since none of their staff is in the office to cut the checks. It’s a vicious cycle.”

The opposite has happened to Arthur Kreitenberg, a physician and inventor, and his son Elliot. In 2013, the duo bet that airlines would be eager to buy a product that disinfects planes. After the Ebola virus outbreak in 2014, Virgin America (now part of Alaska Airlines) gave the Kreitenbergs access to its airliners so they could create the GermFalcon, a device that kills germs in airplane cabins using ultraviolet light.

“Airlines play a direct role in the way disease is spread around the world,” the younger Mr. Kreitenberg said, a claim supported by a 2015 U.S. National Security Strategy that cited the growth in intercontinental air travel as a factor in the global spread of dangerous pathogens.

But the Kreitenbergs misjudged the market; no airlines were interested. Instead, they turned their attention to disinfecting hospitals.

“People dismissed us as Chicken Little, but in the last couple of months there’s been a change of heart” in the aviation industry, the younger Mr. Kreitenberg said.

An entrepreneur can turn a crisis to an advantage by “focusing first what you can give and not what you can get,” Ms. Forleo said. In early March, Mr. Kreitenberg offered the free use of GermFalcon and a similar device for airports to help the air travel industry with the pandemic. Mr. Kreitenberg said he was in touch with nearly every U.S. airline. Seattle’s secondary airport at Paine Field is now a customer and an investor. Alaska Airlines evaluated the device but opted to use a different kind of disinfection technique, a spokeswoman said in late April.

Aviation, with its emphasis on safety, can be a challenging environment for new ideas.

“Regulations have taken risk-taking away, and not even swashbuckling risk, but even a way of looking at the future as something you can construct,” said Saras Sarasvathy, a professor at the University of Virginia Darden School of Business. As a result, many beneficial innovations may never be realized, Professor Sarasvathy said.

Luke Miles, co-founder and creative director of the London-based industrial design firm New Territory, came up with a novel idea for how to make airplane seats more comfortable. But he recognized that having to get government approval for an entirely new seat design would be an expensive and time-consuming problem, so he found a workaround. Last fall, he unveiled Interspace, a set of panels embedded in the upholstery of seat backs that already meet government regulations. During flight, a traveler can unfold the panels, lean into them and sleep.

“Sometimes, it is not about grand moves and everything has to change,” Mr. Miles said. “Here’s where we could enter carefully in a considered way and have more success.”

Mr. Miles, whose company has done design work for Airbus, Aeromexico and Virgin Atlantic, said his experience and connections with airlines contributed to the final product. This collaboration with potential customers is critical.

In his book “Upstream: The Quest to Solve Problems Before They Happen,” the author Dan Heath calls this “surrounding a problem.”

“When you have a complex problem, there is usually no one person or entity who has all the answers,” he said in an interview. “You have a situation where people only see a facet of the problem, and it’s only by assembling the different facets you can come to appreciate the whole and solve for the whole.”

But the Kreitenbergs had no experience in aviation and few contacts, only Elliot Kreitenberg’s evangelism for his father’s invention.

“All we could do was say, ‘We’re using this technology that works in hospitals, and we built it so it fits on an airplane,’” he said.

Stan Malicki, a Polish businessman, faced a similar problem generating buzz for his invention, a system that moves airplanes on an electric track, instead of using engine thrust. The company, Aircraft Towing Systems, claimed U.S. carriers could save millions of gallons of fuel each year while reducing their carbon emissions. But on its own, the company couldn’t get traction until the State of Oklahoma got involved.

“Thrust is a terrible way to move airplanes. It’s great in the air, but terrible on the ground,” said Vince Howie, who saw the idea’s value and could do something about it as director of aerospace and defense with the Oklahoma Department of Commerce.

Because good ideas do not thrive on their own, Professor Sarasvathy said, entrepreneurs should remain open to the ideas of their potential customers and investors.

Ideas are the products the Florida-based aviation consultant Tricia Fantinato was selling to airports and aerospace companies until the coronavirus brought an abrupt halt to funding for many projects.

“This going to be the new normal, so we have to be prepared,” she said she planned to tell them, adding that she was there to advise them during the crisis.

“Aviation is an industry that is crippled right now,” Ms. Forleo said. “But any industry, no matter how complex, is made of humans. In helping folks — that’s where all creative possibilities lie.”