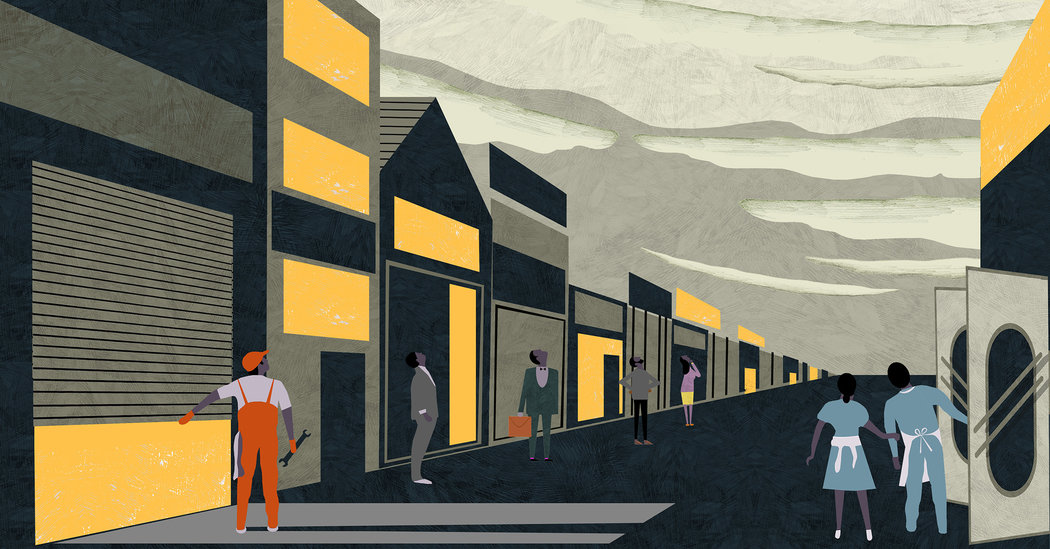 The American economy is facing a plunge into uncharted waters.

Economists say there is little doubt that the nation is headed into a recession because of the coronavirus pandemic, with businesses shutting down and Americans being shut in. But it is harder to foresee the bottom and how long it will take to climb back.

Greg Daco, chief U.S. economist at Oxford Economics, says the economy is assured of a recession — at least two consecutive quarters of economic decline — with output falling 0.4 percent in the first quarter and 12 percent in the second. That would be the biggest quarterly contraction on record, but Goldman Sachs upped the ante on Friday, saying it expected a 24 percent drop in the second quarter.

“This is not just a blip,” Mr. Daco said of the outlook. “We’ve never experienced something like this.”

The abruptness of the descent — and the near-lockdown of major cities — is unheard-of in advanced economies, more akin to wartime privation than to the downturn that accompanied the financial crisis more than a decade ago, or even the Great Depression.

“Even during previous recessions,” noted Ellen Zentner, chief U.S. economist at Morgan Stanley, “no one’s been told you can’t go outside or you can’t gather.”

Smaller companies will be hit harder than large ones because of their limited access to credit and less cash in the bank. “There will be a swath of small businesses that simply won’t be able to survive this,” Ms. Zentner added.

The result is an economy that has gone from full-speed-ahead in January to a full-on freeze. Economists have had to update their models daily as the pandemic increasingly throttles work, commerce and travel.

“Economic data in the near future will be not just bad but unrecognizable,” Credit Suisse said in a note on Friday.

On Thursday, the Labor Department reported that initial jobless claims jumped 30 percent the previous week, to 281,000, the highest level since the aftermath of a hurricane in 2017. But even that number looks tiny next to the number of new claims that Goldman Sachs foresees in the next weekly report: 2.25 million.

Mr. Daco says the unemployment rate could hit 10 percent in April, a level unseen since the nadir of the last recession, with the possibility of even higher jobless rates in the following months. Treasury Secretary Steven Mnuchin reportedly pointed to 20 percent unemployment in the absence of effective intervention, though an aide later said the number was not a forecast. And this after the labor market touched record low unemployment for the last several months.

If Mr. Daco’s 10 percent figure is borne out, 16.5 million people would be out of work, compared with 5.8 million in February.

One reason that things could get so bad so quickly is that economic weakness feeds on itself, with demand falling as more businesses shut their doors and layoffs spread. To make matters worse, a dispute between Russia and Saudi Arabia has resulted in a flood of crude oil, depressing prices and hurting the domestic energy industry.

The pain is so severe because the economy is dominated by services, with consumers powering overall demand, a shift from previous generations, when the production of goods counted for a greater share of output. About three-quarters of economic activity derives from consumer spending, and half of that is at risk, Mr. Daco said.

The proposed federal stimulus — which in a Senate Republican version would include checks of up to $1,200 for taxpayers — would be helpful, economists say, but it would probably only blunt the pandemic’s impact, not stave it off.

The credit-rating agency Moody’s found that lodging, restaurants and airlines would be among the most affected industries, with sectors like health care, pharmaceuticals, mining and chemicals taking more modest hits. Telecommunications, software and the steel industry would be among the least affected.

“This will probably be the world’s first recession that starts in the service sector,” said Gabriel Mathy, an assistant professor at American University whose specialty is economic history. “We can see employment falling much faster than G.D.P. The spike in unemployment claims could be eye-popping.”

Historically, recessions began in goods-producing areas of the economy, according to Mr. Mathy. Some manufacturers build up inventories that can be sold when conditions improve. But at restaurants and barbershops, things have ground to a halt without warning, and that business is lost forever.

Even if the pessimists are correct in their estimates so far, the coronavirus recession would not approach the devastation of the Great Depression. From 1929-33, the economy shrank by one-third, unemployment jumped to 25 percent and the stock market fell 80 percent.

In any case, the ranks of the jobless will multiply in the coming weeks, as the rise in jobless claims indicates. And with officials in California, New York and a growing number of other places telling people to stay inside, the economic toll could become worse.

“My concern isn’t United Airlines or even small and medium-sized corporations that issue bonds,” said Michael Gapen, chief U.S. economist at Barclays. “It’s the restaurant down the street — they are the ones most at risk.”

In New York, restaurants like Mexicue are hanging on by serving food for takeout or delivery, albeit with fewer workers.

During a typical lunch shift at Mexicue’s location on Fifth Avenue in Manhattan, eight employees would work in the kitchen with four or five servers and bartenders in the front of the house. Now the restaurant operates with half its kitchen staff and no one out front. The rest of the employees were laid off.

“We’re really not sure whether the model will work,” said one of Mexicue’s owners, Thomas Kelly. “This is the hardest thing I’ve been through in 10 years I’ve been in this business.”

At one point, it seemed as if manufacturers might be shielded, but the pandemic is now forcing factories to halt operations, too. The nation’s largest automakers — General Motors, Ford Motor and Fiat Chrysler — have idled their plants as a health precaution, even ahead of an inevitable decline in demand.

At MaineSole, a shoe manufacturer in Dexter, Maine, business is down by a third in the last couple of weeks, said Kevin Cain, the company’s owner.

“We usually have a backlog, but we don’t have that for April,” he said. “In March, we’ll probably be break-even. It doesn’t look good.”

Mr. Cain said he was nervous because nine of his 10 workers are 60 or older. “If one of these guys gets sick, we’ll shut down,” he said. If the company were forced to close, he’d be unable to pay hourly salaries, he added.

“I wish I could, but I don’t have the money in the bank for that,” Mr. Cain said. “If I close, they’d have to apply for unemployment.”

Over the long run, the economic damage will be determined not just by what happens on the medical front but also by the level of consumer confidence.

Warwick McKibbin, an economist at the Australian National University, has been modeling the impact of pandemics since 2003, when the World Health Organization asked for an assessment of the fallout from SARS, a coronavirus-caused disease that emerged in China at the end of 2002 and killed 774 people.

At the request of the Brookings Institution in Washington this month, he and a colleague, Roshen Fernando, outlined scenarios for the global macroeconomic effect of the new coronavirus, depending on how widely it spread and how many people it killed.

Even under a relatively modest set of assumptions in Mr. McKibbin and Mr. Fernando’s macroeconomic model, a one-year epidemic would kill 236,000 people in the United States and reduce the country’s gross domestic product by 2 percent, or $420 billion.

But if the virus spreads more broadly and has a higher mortality rate, the economic effect would be proportionately greater. A one-year epidemic that took just over one million lives, which is consistent with recent projections based on scenarios from the Centers for Disease Control and Prevention, would reduce the nation’s G.D.P. in 2020 by $1.8 trillion — 8.4 percent.

Even if the disease does turn out to be a one-year crisis, Mr. McKibbin has little faith in a robust economic rebound once it has passed. In his view, the disease has provided an opportunity to reassess a vast overvaluation of financial assets.

“People may now realize the extent of their overvaluation, and this could lead to persistent economic consequences,” he said. “This is a day of reckoning.”

And what if the outbreak doesn’t run its course in 2020? Were it to become a recurring threat in the United States, like a supercharged flu, killing 236,000 a year, the economists estimated that the virus would trim annual output by 1.5 percent into the future.

Ultimately, the severity of the economy’s slowdown depends on the length and seriousness of the pandemic. But Torsten Slok, chief economist at Deutsche Bank Securities, says consumers will continue to be cautious even after authorities signal the all clear.

A strong rebound — what economists call a V-shaped recovery, as opposed to a U-shaped one with an extended low — would require a profound resurgence in confidence. But few see that on the horizon.

“There is a risk that the psychology has changed,” Mr. Slok said. “People will be very reluctant to do a lot of travel and spending and may want to save for another day. There will be more caution.”