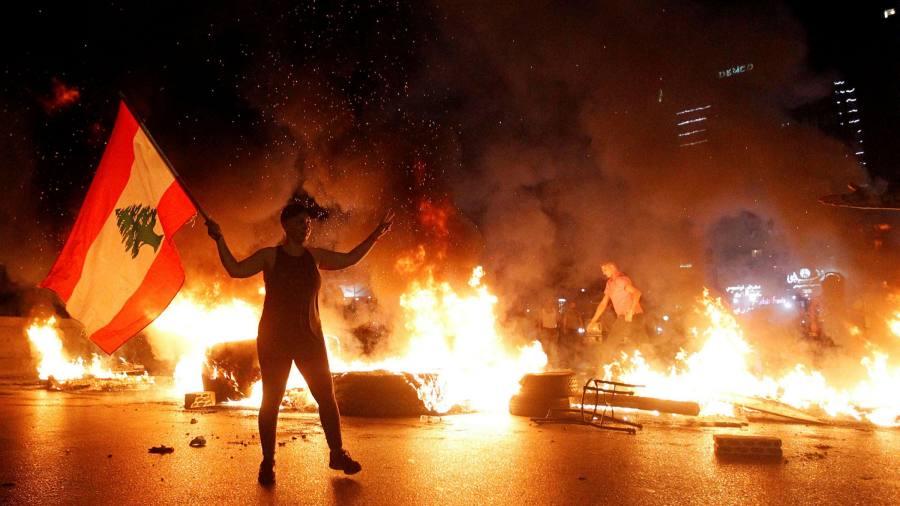 A dramatic collapse in the value of the local currency sparked protests across Lebanon on Thursday night, as the government and central bank struggled to stem the country’s worst economic crisis since its civil war.

Nasser Saidi, a former central bank vice-governor, said there was little the government could do at this point to stop the slide. “This is a cash market, not your usual forex market. The central bank is no longer able to intervene.”

Demonstrators continued to block roads across Lebanon on Friday to protest against the government’s handling of the crisis as their purchasing power plummeted. Although the protests were largely peaceful, local media reported that fires had been started outside the central bank’s office in the northern city of Tripoli.

There are now multiple exchange rates in Lebanon’s chaotic currency market. The union of money changers has set its exchange rate at just under L£4,000, while commercial banks had been required to sell dollars for about L£3,000. The central bank issued a circular on Friday instructing commercial banks to sell at the union’s rate.

In light of the disparity between rates of exchange, the traders’ syndicate of north Lebanon announced a general strike on Friday while markets in Baalbek city also closed. In Beirut, many exchange houses — which have been taking rolling strike action — remained shut on Friday, leaving petrol stations and other informal traders as the main exchange venues.

Mr Saidi, the former central banker, said the volatile price swings were driven by four main factors: uncertainty among currency traders about government policy; the printing of currency to cover a fiscal deficit left by falling tax receipts; the economic impact of coronavirus; and panic in the exchange market in neighbouring Syria, where business people are anticipating the impact of new US sanctions next week.

The official foreign exchange market has all but disappeared since last year after a severe liquidity shortage meant commercial banks were largely unable to access adequate dollar funds. Meanwhile, depositors have been cut off from their savings by bank restrictions intended to stem the outflow of dollars since protests began in October, further stalling the country’s fragile economy.

The government in April estimated about 48 per cent of the population was living in poverty, and predicted poverty levels could hit 60 per cent by the end of 2020.