DealBook: A Decade of Jobs Destroyed in a Month 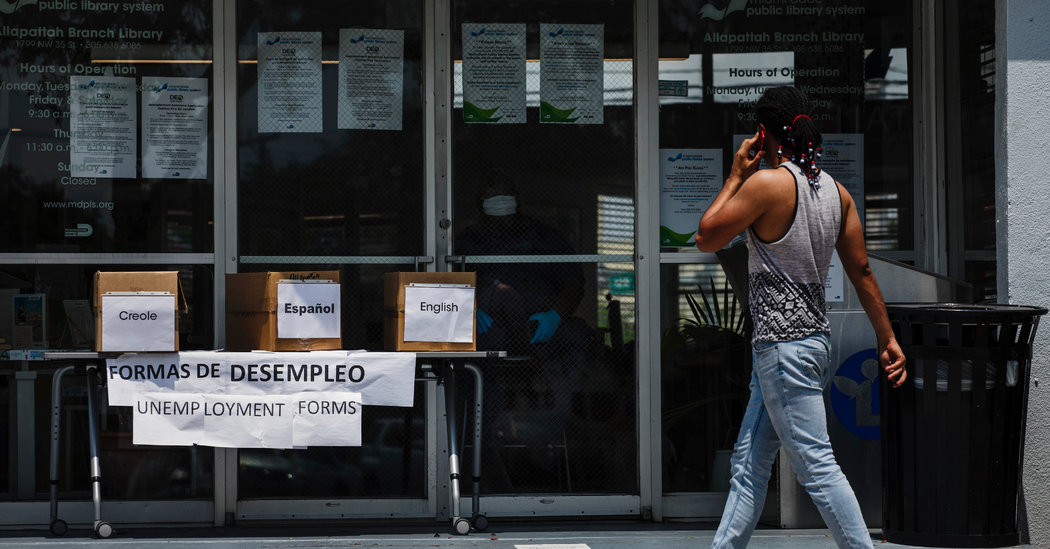 Good morning. Tom Friedman is joining us today at 11 a.m. Eastern on our latest DealBook Debrief call. The Times Opinion columnist will discuss his plan for making the American economy more resilient after the pandemic. R.S.V.P. here, and to submit questions for Tom in advance, drop us a line at [email protected]. (Was this email forwarded to you? Sign up here.)

The latest weekly count of initial U.S. unemployment claims is set to be released at 8:30 a.m. Eastern. The number of people in America who lost their jobs in the past four weeks is expected to surpass all of the jobs created since mid-2009, the end of the last recession.

Economists think around five million people lost their jobs last week — or at least, that’s how many people were able to file an unemployment claim. (Overloaded systems and unclear guidelines have led to delays for many.)

The April economic shutdown will produce more truly horrific numbers when the month is over. Torsten Slok, Deutsche Bank’s chief economist, expects the U.S. unemployment rate to rise to 17 percent in April, from 4.4 percent in March.

• ”The May number also will be terrible,” notes Ian Shepherdson of Pantheon Macroeconomics. “As the shock reverberates up supply chains, we doubt payrolls will immediately start to rebound when the first tentative reopenings begin.” (More on that below.)

The ‘Opening Our Country Council’ is off to a rocky start

The rollout of a group of over 200 corporate leaders to advise President Trump on restarting the U.S. economy was chaotic. Its first day of business was no less messy.

Several C.E.O.s were unable to join conference calls held yesterday, after many were surprised to learn they had been appointed to counsel the president. David Solomon of Goldman Sachs was busy leading his firm’s earnings call. A deputy to Jamie Dimon of JPMorgan Chase spent 15 minutes trying to dial into the White House call before giving up.

Those who participated largely agreed that more testing was needed before the economy could reopen. Moving too quickly, those C.E.O.s suggested, could lead to further shutdowns and more panic, as well as potential legal liability if people got sick after returning to work. That echoed calls from public health officials who pointed to shortages of testing supplies across the country.

Still, Mr. Trump is expected to announce guidelines today for reopening the economy, citing data that suggests the U.S. has passed a peak for coronavirus cases. (“We want to get our country back,” he said at a news conference yesterday, “and we’re going to do it soon.”) But many governors are unlikely to lift state-level lockdowns anytime soon.

• In the meantime, Chancellor Angela Merkel of Germany unveiled a cautious plan for her country to start easing lockdown rules beginning next week.

More about the council: Some DealBook readers wrote in to ask us about the demographics of the group, particularly on gender. Of the 220 executives on the list, 20 are women. That’s fewer than the 22 men named Dave and Mike (and David and Michael).

• But the 9 percent female representation in the president’s industry groups is higher than the average at S&P 500 companies, where 6 percent of C.E.O.s are women.

The bailouts are falling short

The U.S. government’s small-business rescue fund is all but exhausted, and doubts are rising over other efforts to prop up the economy.

More than $315 billion worth of loans from the Paycheck Protection Program had been approved as of last night, out of a $349 billion fund. Additional money is held up in negotiations between lawmakers and the Trump administration, who disagree over new restrictions on how the money is directed.

• Big restaurant chains have used exceptions granted to food and hotel firms to take out the largest loans allowed under the program, which is designed for companies with fewer than 500 employees.

• A growing number of small businesses have decided to close down anyway, The Wall Street Journal reports, with some that saying money from the rescue program isn’t enough to save their companies.

Meanwhile, some commentators are worried about “moral hazard,” whereby bailed-out companies take on more risk because they’re confident that the government will rescue them from future trouble. “The government’s recent interventions make it more likely that companies will continue to load up on debt, reducing their individual and collective resilience,” Kathryn Judge, a Columbia Law School professor, writes in Forbes.

Banks prepare for a tidal wave of defaults

Five of the six largest banks in America have now reported their first-quarter financial results. (Morgan Stanley rounds out the reports today.)

Collectively, they set aside nearly $25 billion in loan-loss provisions, up from $5 billion in the previous quarter.

• The only bright spot for banks has come from their trading desks, which are recording their best results in years thanks to market volatility.

How bad could it get? Although the Fed is backstopping loans and relaxing regulations, banks are clearly preparing for a wave of defaults. The Fed’s latest “Beige Book,” usually a sleepy report that compiles anecdotes about economic conditions from regional Fed banks, features bracing predictions from finance firms around the country. See if you can spot a pattern:

• Kansas City: “Loan quality was modestly below a year ago, but was expected to deteriorate sharply in the next six months.”

The pandemic was always going to be bad for the retail and restaurant industries. New government data shows how brutal it has been.

Retail sales in March plunged 8.7 percent, according to the Commerce Department. That was the worst month-on-month fall since the government began tracking the data nearly three decades ago. And April “may be one of the worst months ever,” Sucharita Kodali of Forrester Research told The Times.

• Some property owners are creating blacklists of tenants that have skipped rent payments, a list that includes the Equinox gym chain, LVMH and Staples.

Why it matters: Retail accounts for more than one in 10 U.S. jobs, and companies generate billions in rent payments, sales taxes and ad sales. And even once the economy reopens, consumers are unlikely to quickly resume spending or flock to malls and restaurants.

• A recent survey of small businesses by academic economists found that only a third of restaurant and retailer owners thought they could withstand the crisis if it goes on for another four months.

• Gulf states are using the market turmoil to go on a multibillion-dollar buying spree. (FT)

• The sports betting site DraftKings still intends to go public this month, despite a lack of — you know — sports. (Bloomberg)

• Google plans to slow down its hiring for the rest of 2020. (Bloomberg)

• The cloud software company ServiceNow pledged not to lay off any workers this year. (Business Insider)

• “Why We Fail to Prepare for Disasters” (FT)

• Analysts who share the same first name as the C.E.O.s they cover tend to make more accurate earnings estimates. (WSJ)