DealBook: A Four-Point Plan for Fixing the Economy 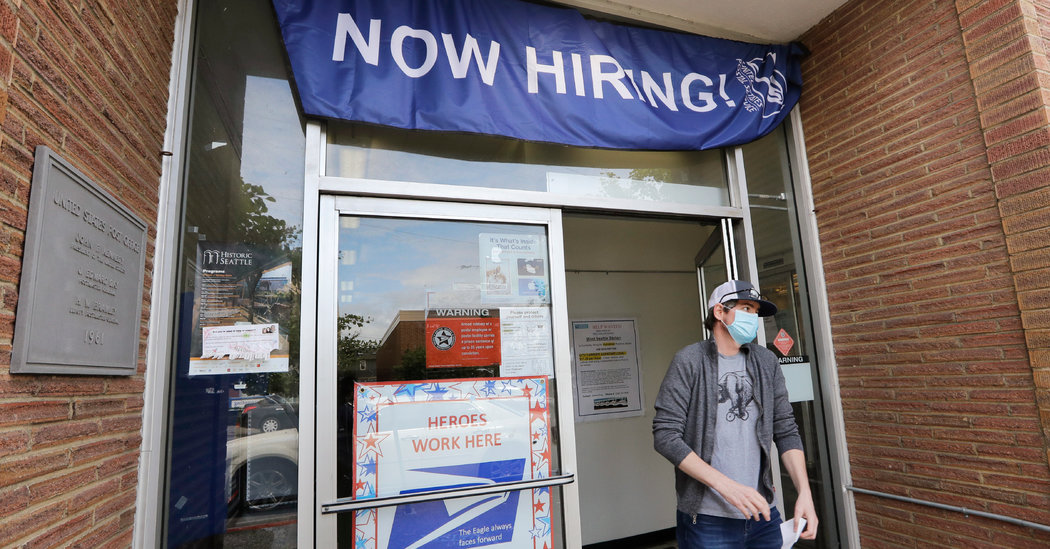 The long road back

In many ways, the economic recovery from the coronavirus has defied the worst-case scenarios. Jobs, spending and markets have bounced back more quickly than expected, although they largely remain below pre-pandemic levels. This is mostly thanks to unprecedented government intervention, but many of those stimulus programs are set to expire soon. Then what?

A heavyweight group of economists and former policymakers has a plan. Under the banner of the Aspen Institute’s Economic Strategy Group, the four-member team has published a meaty report outlining a flexible approach to supporting the recovery, tied to the strength of the rebound and not to any specific date. (High-level details are in this Washington Post op-ed.)

Their proposal has four parts:

1️⃣ Income support for the unemployed. Provide a weekly benefit of up to 40 percent of wages for the jobless as long as a state’s unemployment rate is above 15 percent, phased out until the rate hits 7 percent, when it is eliminated.

2️⃣ Additional incentives to return to work. Subsidize lower-wage jobs, which become less attractive when enhanced unemployment benefits are on offer and many of the roles are at higher risk of exposure to the coronavirus. Incentives could include a more generous Earned Income Tax Credit or direct hiring bonuses.

3️⃣ Lending to small and midsize businesses. A “much more aggressive use” of the funds already allocated by Congress to support loans — not grants — to target viable businesses, at better rates, understanding that the government could face more potential losses.

4️⃣ Support the states. Issue grants for general use (and especially education), along with federal funding for Medicaid tied to the unemployment rate.

It won’t be cheap. At best, the group reckons that its plan would cost just under $1 trillion. If the recovery drags on, it could cost something like $2 trillion. “Rather than misleading or pretending the recovery will be cheaper, for example by covering only a few months of unemployment insurance or only a fraction of the ultimate cost of the Paycheck Protection Plan,” the group writes, “we believe it is better to be upfront about what the total costs will ultimately be and legislate them today in a contingent fashion that depends on economic circumstances.”

In other news on recovery and reopening:

A virus surge in Sun Belt states. Arizona, Florida and Texas reported their largest one-day increases in Covid-19 cases yet. And it’s not just because of more testing: The rate of positive test results is also rising. But Gov. Ron DeSantis of Florida said, “We’re not shutting down.”

Beijing goes back into lockdown. A rise in cases led to the closing of schools and cancellation of flights to the capital, as authorities raised the coronavirus threat level just 10 days after lowering it, which had allowed more economic activity to resume.

Prepare for negative interest rates in the U.S., Bloomberg advised users of its data terminals. The company recommended that subscribers ensure their financial models wouldn’t break, Y2K-style, if the Fed pushes rates below zero. The central bank says it won’t … but experience suggests that it’s best to be prepared.

A corporate call for policing overhaul

Protests over racial injustice following the killing of George Floyd first prompted companies and their leaders to pledge support for combating racism. Now, Business Roundtable, which represents American blue-chip companies, is speaking out on policing policies.

Business Roundtable urged changes, saying in a statement that “among the most urgent challenges is the need to protect our citizens and address unwarranted, excessive and even lethal force, especially against unarmed black men and women.”

The call to action shows Corporate America responding to the public conversation on race, specifically the debate over the “defund the police” movement. National polls show growing support for overhauling law enforcement.

But the group didn’t suggest specific changes, instead saying that lawmakers should “come together and seize the opportunity for real solutions,” with its members promising to support “significant reforms.”

In other news on social inequality:

Morgan Stanley’s former diversity chief sued the firm, alleging that she was fired in December after pushing a plan to diversify the bank’s ranks of financial advisers. The firm denies the allegations.

Black founders face a litany of humiliations in Silicon Valley, Bloomberg reports after speaking with 20 leaders. Among them: others mistaking their white deputies as the C.E.O. of their companies, and visible discomfort on the part of white venture capitalists in business pitch meetings.

Transgender people worry they are falling behind during the coronavirus recession, The Times reports. They were already facing adversity, with transgender people of color six times more likely than the national average to be unemployed. With Jay Powell, the Fed chairman, already warning that the pandemic will widen inequality, there’s concern that things will only get worse.

The iPhone maker is the latest tech giant to face scrutiny over its competitive practices, as start-ups and regulators say that the Silicon Valley giant hasn’t been playing fair.

The latest controversy is over an email app. Basecamp had submitted an update for Hey, a new email service already approved by Apple, for review by the company’s App Store team. But Apple rejected the app because Hey didn’t accept subscriptions in its app — which would have let Apple take a cut, Protocol reports.

• The revelation came after the E.U. began investigating the App Store for potential antitrust violations, an inquiry stemming from complaints by Spotify.

Others are now piling on. Match Group, the parent company of the dating service Tinder, criticized Apple’s demands for a cut of apps’ revenue. It told Axios in a statement that “Apple squeezes industries like e-books, music and video streaming, cloud storage, gaming and online dating for 30% of their revenue, which is all the more alarming when Apple then enters that space, as we’ve repeatedly seen.”

PG&E pleaded guilty to 84 counts of involuntary manslaughter. The rare acknowledgment of corporate wrongdoing, which also came with a $3.5 million fine, came at the end of a two-year trial over the utility’s role in the deadly fire that destroyed the town of Paradise, Calif. in 2018.

A common steroid appears to help severely ill coronavirus patients. Dexamethasone reduced deaths in patients with severe cases of Covid-19, according to a study of 2,100 patients by the University of Oxford.

Some lawmakers benefited directly from small-business rescue loans. At least four members of Congress have family ties to firms that received funds, which is allowed by the program but nonetheless awkward as lawmakers fight over the Treasury Department’s refusal to release information about recipients of the loans.

Retail sales blew past expectations last month, rising nearly 18 percent from April, more than doubling the average economist forecast. Maybe there will be a V-shaped recovery after all?

Not so fast. As we’ve discussed before, the severity of the pandemic’s shock has made most economic data — to use a technical term — go bananas. The month-to-month jump in May sales was the largest on record, but that was because it came after a lockdown-induced plunge in April; it was still 6 percent lower than the same month last year. Few expect sales to match pre-pandemic levels for some time, even if shorter-term growth looks robust.

Uncovering details in the data. Home renovations have become a popular pandemic pastime: Sales of building materials and garden supplies were up 16 percent in May versus the year before, one of the few categories doing better after the outbreak. But clothing sales have collapsed, down more than 60 percent from last year. There’s a joke to be made about naked gardening, but we’ve learned that, in fact, World Naked Gardening Day has been held on the first Saturday in May for the past 15 years. Did economists fail to factor that into their models?

• SoftBank reportedly plans to sell up to two-thirds of its stake in T-Mobile, which is valued at about $20 billion. (CNBC)

• Companies are asking lenders and bondholders to substitute their profits last year for this year’s — basically, to “pretend the coronavirus hasn’t happened” — to avoid breaching debt covenants. (FT)

• Google banned ZeroHedge from its ad platform over policy violations in the user comments on stories about Black Lives Matter protests. (NBC News)

• Reed Hastings of Netflix is reportedly building a 2,100-acre luxury training retreat in Colorado for teachers. Meanwhile, WeWork is in talks with New York City private schools about holding classes in its co-working spaces. (Recode, CNBC)

📞 Remember that story about the weird world of pizza arbitrage? (If not, treat yourself and click the link.) A panel of writers and editors from The Times will discuss it with the author, the former trader Ranjan Roy, in the latest edition of “This is Good.” R.S.V.P. here to join the call, which will be held today at 12 p.m. Eastern.