DealBook: A Prescription for Reviving the Economy 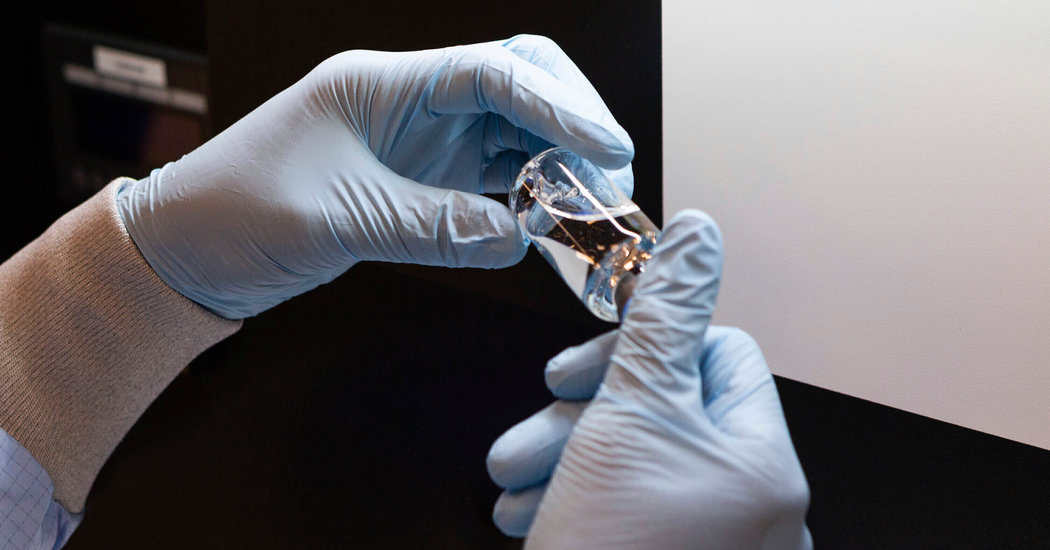 Good morning. If you couldn’t join us for the DealBook Debrief call with Tom Friedman yesterday, the highlights are at the bottom of the email and the full recording is here. Skip to 9:00 to hear Tom sing a gospel song — we covered a lot of ground in the call. (Was this email forwarded to you? Sign up here.)

The policies — and pharmaceuticals — that could help reopen the economy

The markets are abuzz about promising early data from a clinical trial of Gilead’s antiviral drug remdesivir on coronavirus patients. It comes as President Trump unveiled guidelines for restarting the U.S. economy yesterday, but acknowledged that it would be up to individual states to decide when to reopen for business.

Gilead’s shares are soaring in after-hours trading after STAT reported that patients appeared to show rapid recovery after taking remdesivir, suggesting that it could reduce the deadliness of Covid-19, and potentially make reopening the economy less risky.

• But experts caution that clinical trials for all such treatments are continuing and will take a long time to play out. Gilead itself warned that more data was needed to determine the drug’s efficacy.

• In the past, remdesivir had been studied as a treatment for Ebola, but “did not work well enough against that virus.”

Mr. Trump’s guidelines for the states recommend moving in stages, starting when the number of coronavirus cases declines and hospitals aren’t overwhelmed. Reopening would begin with large public places like restaurants and sports venues, then with schools, and then work sites — all with appropriate social distancing. Some states, like Ohio, are expected to begin reopening around May 1, while others will wait much longer.

The guidelines don’t account for comprehensive testing, which public health experts say is a serious weakness. The White House “assumes that testing will be at a level that at the moment doesn’t exist,” Barry Bloom, a professor of public health at Harvard, told Business Insider.

On testing, there is good and bad news:

⬆️ Roche said it has developed an antibody test, which shows whether a person had contracted Covid-19, and hopes to begin selling next month. Other companies are racing to develop their own tests.

⬇️ Britain showed the danger of betting on unproven tests when it bought $20 million worth of Chinese-developed antibody exams that proved worthless.

In less than two weeks, the U.S. government’s $349 billion small-business lending program has run out of money. Congress is in talks about adding more funds, but an agreement doesn’t seem imminent.

The distribution was patchy, according to a Bloomberg analysis, with the first-come-first-served program doling out loans to cover more than 70 percent of small-business payrolls in Nebraska and North Dakota, but less than a quarter in California and New York.

• Joseph Brusuelas, the chief economist of RSM, says that the program will need $1 trillion to meet demand.

The rollout of stimulus checks is also fraught. Some people who received relief payments via direct deposit this week discovered that their banks seized some or all of the money because their accounts were overdrawn, reports The Times’s Emily Flitter.

• After Emily’s story came out, USAA said that it would pause collections for 90 days on overdrawn accounts.

Bill Gates in the cross hairs

The Microsoft co-founder has spent years and billions of dollars fighting the spread of disease, including the coronavirus. But his criticism of President Trump’s response to the pandemic has now made him a target of conspiracy theories, Dai Wakabayashi, Davey Alba and Marc Tracy of The Times report:

“In posts on YouTube, Facebook and Twitter, he is being falsely portrayed as the creator of Covid-19, as a profiteer from a virus vaccine, and as part of a dastardly plot to use the illness to cull or surveil the global population.”

Misinformation about Mr. Gates is now the most widespread of all coronavirus falsehoods tracked by Zignal Labs, The Times reports.

As executives face a deep recession, many have cut spending, furloughed staff members and stopped buying back shares to help save cash. But many companies are still paying dividends, the subject of increasingly heated debate.

Companies have a “moral imperative” to pay dividends, Keith Skeoch, the C.E.O. of the asset manager Standard Life Aberdeen, told CNBC. On the other hand, Chris Hughes of Bloomberg Opinion is unconvinced: “A board’s duty is to the overall interest of the company, not to one portion of its shareholder base.”

The big American banks are keeping their dividends, their C.E.O.s made clear in earnings reports this week, even after they scrapped buybacks. “The way we’re looking at things, we remain committed to paying our dividend,” Citigroup’s Michael Corbat told investors.

• The Fed has given its blessing for banks to pay dividends, which will total $40 billion for the largest lenders this year. The European Central Bank and Bank of England have gone the other way, telling banks to suspend dividend payments.

• Neel Kashkari, the president of the Minneapolis Fed, wrote in The Financial Times yesterday that big U.S. banks should raise a total of $200 billion in capital as a buffer, just in case. “If the crisis turns out less serious than we fear, banks can return the capital through buybacks and dividends once the crisis passes,” he said.

There is a reckoning brewing for shareholder payouts, as the downturn exposes companies with thin financial cushions and large debt loads.

• Buybacks are bigger and more controversial than dividends, and could be rethought after the pandemic passes. Zion Research Group estimates that stock repurchases accounted for just over half of free cash flow for the S&P 500 over the past decade.

• As corporate bailouts take shape, buyback and dividend practices could stoke public anger, especially when they are set against big business’s tax payments:

The week in Amazon

The e-commerce giant has experienced a lot of ups and downs during the coronavirus outbreak. This week was particularly newsy.

📈Amazon’s shares rose to an all-time high, valuing the company at $1.2 trillion. Its founder, Jeff Bezos, wrote in his annual letter to investors that the company plans to test all employees for Covid-19, including workers who show no symptoms. Eric Schmidt, Google’s former C.E.O., said that people should “be a little grateful” for tech giants like Amazon, arguing that life during the pandemic would be a lot more difficult without them.

📉 More than 70 Amazon warehouses and delivery facilities in the U.S. have reported infections. At least one employee has died from complications of Covid-19. The company is running out of many products. It closed its warehouses in France after a court ruled that it could deliver only “essential” products until warehouse workers received more protection.

Tom Friedman on life after the pandemic

The Times Opinion columnist was the special guest on our latest DealBook Debrief conference call yesterday, taking part in a wide-ranging discussion about how to make the American economy more resilient after the pandemic, based on his recent column. Here are highlights:

What shape will the recovery take?

What does that mean for business and daily life?

“I simply ask one question to every single business: What does your business look like when every one of your customers, suppliers, partners, and employees is coming to work, or knocking on your door, wearing a mask, wearing plastic gloves, and standing six feet away?”

Will the rich pay more in taxes when this is all over?

“They are just going to have to. There’s just no question about it. And if they don’t — I go back to what happened after 2008, with Occupy Wall Street and the Tea Party: They will be a knitting circle compared to the social unrest you will see. We can’t leave that many people in our society hurting.”

• The payments processor Stripe raised $600 million in new funding at a valuation of nearly $36 billion. (Axios)

• Shares in Nokia jumped after a news report that the company was preparing to defend itself against a takeover bid. (Reuters)

• Stephen Feinberg, the billionaire co-founder of Cerberus Capital Management, is in talks to take a top job in the Office of the Director of National Intelligence. (NYT)

• U.S.-bound medical equipment is stranded in China because of new export restrictions imposed by Beijing. (WSJ)

• Facebook has scaled back the ambitions of its Libra cryptocurrency project. (NYT)

• Uber withdrew its financial guidance for 2020 and will take a $2 billion write-down. (Bloomberg)

• Sign of the times: Netflix’s market value is bigger than Disney’s. (Quartz)

• China’s half-century run of economic growth has come to an end. (NYT)

• The economic crisis will expose a decade’s worth of swindling and aggressive accounting. (The Economist)

• Online shopping is booming. The cargo flights ferrying those items are, too. (NYT)