DealBook: An Election Fought With Charts 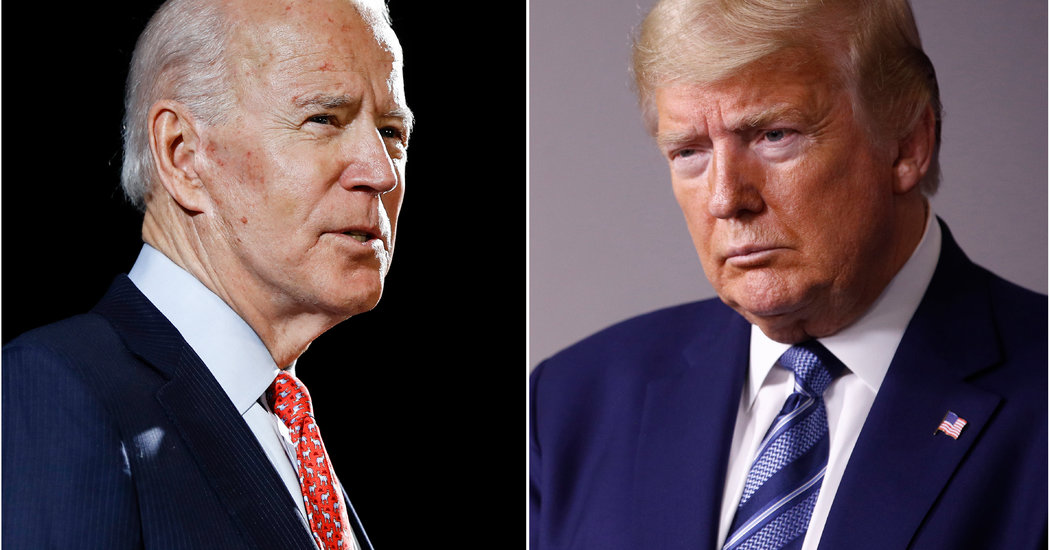 Good morning. Bad weather scrubbed the historic launch of a crewed SpaceX mission yesterday, so NASA will try again this weekend. (Was this email forwarded to you? Sign up here.)

In this quarter, the U.S. economy is expected to record the largest decline on record. But many expect it to bounce back in the next, perhaps at the fastest ever rate. A similar pattern could follow for jobs, with millions fired in the spring and millions hired in the summer. Such is the statistical weirdness that results from a pandemic.

In an election year, the politics of statistics will be more fraught than ever, with different sets of data painting sharply different, but equally valid, pictures of economic health. Given when states are reopening, the numbers released just before the vote could be particularly robust, which makes Democrats nervous and Republicans hopeful.

What should voters do? We called Charles Wheelan, a lecturer at Dartmouth, founder of the centrist political group Unite America and author of a series of explanatory books about economics, statistics and money. “No single number ever paints a complete portrait,” he said. A “dashboard” of indicators — G.D.P., jobs, wages or whatever is important — with trends over five or seven years is more meaningful than rates of change over shorter periods.

• Median wage growth and jobs by educational attainment give a more nuanced view than the headline stats, which can be skewed by high earners or boom sectors.

• And he wouldn’t look at the stock market to assess the economy at large: It’s “our best guess about the future, but it’s still a lousy guess.”

“We’re all looking for data to tell us what we already think,” he said. The debate about the trade-offs between reopening and keeping infections down suggests that “we seem unable to hold onto two true notions at the same time,” he added. “I am not optimistic that we can and will discuss these things in a sophisticated way.”

Coronavirus deaths in the U.S. surpassed 100,000, a far higher toll than anywhere else.

Disney World will reopen in July. But it will run at half capacity or less, make masks mandatory and enforce social distancing (no hugging Mickey).

Huawei’s finance chief, Meng Wanzhou, came closer to extradition to the U.S. A court in Vancouver, where she was arrested in 2018, ruled the fraud charges against her would constitute a crime in Canada. She’ll face another hearing next month.

China approved a plan today to give it broad power to quash dissent in Hong Kong, drastically eroding the city’s long-held autonomy. “Rights and freedoms are not absolute,” said the city’s chief executive, Carrie Lam.

So Hong Kong is no longer independent enough from Beijing to warrant its special status in Washington, the secretary of state, Mike Pompeo, said yesterday.

Now what? If that change becomes official, major repercussions will follow for trade and travel.

• The U.S. ran a $26 billion trade surplus with Hong Kong last year, one of its largest anywhere, because the city acts as a bridge to mainland China. Extending tariffs there could invite retaliation from Beijing, hurting American exporters.

• Hundreds of American companies, especially financial ones, have regional headquarters and other offices in Hong Kong (The Times has one, too). The city’s status as a financial hub has suffered as China tightened its control — in one widely followed ranking, it recently fell from third (behind New York and London) to sixth. Visa restrictions or other barriers to business wouldn’t help.

Americans born between 1980 and 1996, a group that includes one of us writing this newsletter, get a lot of criticism. But in an arresting series of charts, The Washington Post’s Andrew Van Dam makes a case that millennials are America’s “unluckiest generation.”

They have worked through the slowest economic growth of any generation since the early 1800s, Mr. Van Dam writes. The oldest millennials started job-hunting during the dot-com bust. Then came the Sept. 11 attacks, the 2008 financial crisis and now the pandemic.

• Starting in lower-paying jobs has been shown to reduce lifetime earnings potential.

Millennials are doing the right things — they overspend less than previous generations. But they’ve had little chance to build a cash cushion, and each downturn has hit them harder than generations with more savings.

The E.U. is starting to look like a central government. The proposal going to national leaders calls for joint borrowing on a new scale, bringing the bloc closer to a common budget that might be paid for with shared taxes. And €500 billion of it would be grants for countries in the greatest need — Italy and Spain foremost. Europe’s richest countries have previously rejected much smaller fiscal transfers.

• All this needs approval by national parliaments, as well as national leaders, and they could water it down. But then the continent is facing a brutal recession “way bigger than any one of us,” said Ursula von der Leyen, president of the European Commission, the E.U. administrative body that assembled the proposal.

Last year, podcasts generated nearly $530 million in advertising in the U.S., according to Zenith. That was just 0.2 percent of overall ad spending.

And last week, Spotify signed a deal for $100 million for exclusive distribution of the podcast hosted by the comedian and commentator Joe Rogan. Since then, Spotify’s market value has risen by about $4.5 billion.

Something big is happening with the outspoken Mr. Rogan, who has built a huge audience. Spotify has splashed out on other personality-driven podcasts, although those aren’t the cultural force that “The Joe Rogan Experience” has become

“Money is not the only reason this deal matters,” The Times Opinion staff writer Bari Weiss wrote recently. She sees his rise as made possible, in part, by “legacy media’s blind spots.” She also wrote recently about how the coronavirus could transform the culture wars. She will discuss culture, politics, podcasts and take your questions on our DealBook Debrief call today at 11 a.m. Eastern — R.S.V.P. here to join.

Where things are going better than expected

The market continues to climb, despite a lousy outlook for corporate earnings (as we noted yesterday). Many companies have either lowered their forecasts of earnings or simply given up trying to do them.

But a handful of brave companies have raised their earnings forecasts in recent weeks, according to FactSet. The list of companies could describe a common lockdown routine: eating comfort foods like sugary cereal and beef jerky (General Mills and ConAgra), stocking up the medicine cabinet (Eli Lilly), obsessively cleaning (Clorox), using remote-networking software for work (Citrix) and blowing off steam by playing “Call of Duty” (Activision Blizzard).

• Renault and Nissan announced a plan to save their strained alliance. (NYT)

• Italy’s UBI is arguing that the pandemic invalidates its rival Intesa’s February takeover bid — usually it’s the buyer who tries to scrap a deal this way. (Reuters)

• Even well-connected white-collar workers are finding their careers paused. (NYT)

• The revamped spacesuits worn by SpaceX astronauts are like a “tuxedo for the Starship Enterprise.” (NYT)

• “The Coming Collapse of a Cheerleading Monopolist.” (BIG by Matt Stoller)