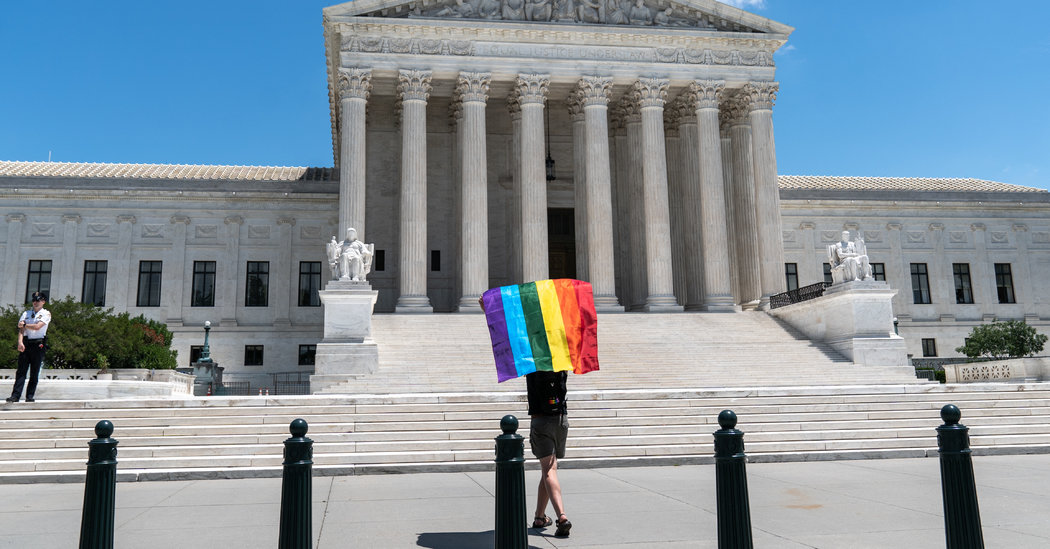 Good morning. The Fed’s move to buy individual corporate bonds on the open market, instead of just newly issued debt or E.T.F.s, is fueling a rally today. (Was this email forwarded to you? Sign up here.)

The ‘most consequential’ decision on workplace discrimination

In an unexpected ruling, the U.S. Supreme Court said yesterday that the Civil Rights Act of 1964 protects L.G.B.T. workers if they’re fired “merely for being gay or transgender.”

It was a 6 to 3 vote, with the court’s four liberals joined by Chief Justice John Roberts and — surprising many — the Trump-appointed Justice Neil Gorsuch, who wrote the majority opinion. The cases in question concerned gay men fired from a government program in Georgia and a skydiving business in New York, and a transgender woman who was fired from a Michigan funeral home.

The argument turned on the meaning of sex, as it appears in Title VII of the act, which bars discrimination “because of sex.” The government put forward a narrow interpretation: “Sex means whether you’re male or female, not whether you’re gay or straight,” Solicitor General Noel Francisco said at a hearing last October. But Justice Gorsuch wrote that treating homosexual or transgender employees differently “inescapably” relies on sex.

What executives are saying:

• “Full equality for the L.G.B.T.Q.+ community is long overdue,” said Jim Fitterling, Dow’s C.E.O. “But we still must continue to advocate for full nondiscrimination policies nationwide — like the Equality Act.” (That law would bar discrimination against gay and transgender people in all aspects of life.)

• “This is BIG y’all — excuse me while I shed a tear and click my heels with glee,” said Kim Culmone, a senior vice president at Mattel.

What companies can do now: Cara Pelletier of Ultimate Software, a Florida-based human resources tech company with more than 6,000 employees, told DealBook that “the work does not end with today’s ruling.” Companies should articulate their values publicly, revisit and improve H.R. policies and consider creating “communities of interest” for L.G.B.T.Q. workers, she suggests.

• “As a queer person leading workplace diversity, equity and belonging efforts, I am overjoyed at the landmark SCOTUS decision,” she added.

JPMorgan Chase plans to bring more traders back to its New York headquarters next week, CNBC reports, with about half its employees due in corporate spaces by mid-July.

Prepare for a baseball-less 2020, warned Major League Baseball’s commissioner. Rob Manfred said that deadlock between team owners and the players’ union could prevent even an abbreviated season.

Next year’s Oscars will be delayed to April from February, the Academy of Motion Picture Arts and Sciences announced. Over 80 percent of the academy’s revenue comes from the ceremony, as The Times’s Brooks Barnes points out: Walt Disney’s ABC pays about $75 million a year to broadcast it.

Harvard won’t require the SAT or the ACT for admissions next year, citing how hard it currently is to schedule tests. Other universities have taken similar steps, though Princeton is still asking for scores.

A risk factor for the ages

Hertz filed yesterday to sell new stock to help raise up to $500 million, despite being in bankruptcy protection. The offering document is unusually frank.

The car-rental company warns, after noting that it will formulate a plan to restructure its finances and try to emerge from Chapter 11:

Although we cannot predict how our common stock will be treated under a plan, we expect that common stockholders would not receive a recovery through any plan unless the holders of more senior claims and interests, such as secured and unsecured indebtedness (which is currently trading at a significant discount), are paid in full, which would require a significant and rapid and currently unanticipated improvement in business conditions to pre-Covid-19 or close to pre-Covid-19 levels. We also expect our stockholders’ equity to decrease as we use cash on hand to support our operations in bankruptcy. Consequently, there is a significant risk that the holders of our common stock, including purchasers in this offering, will receive no recovery under the Chapter 11 Cases and that our common stock will be worthless.

That’s a splash of cold water for day traders widely believed to have driven the surge in Hertz’s stock (which made the offering possible in the first place). The company’s shares fell 33 percent after the offering — along with its warning — was made public.

Deal Professor: Mall or nothing

Steven Davidoff Solomon, a.k.a. the Deal Professor, is a professor at the U.C. Berkeley School of Law and the faculty co-director at the Berkeley Center for Law, Business and the Economy. Here, he looks at the fine print of a faltering retail deal.

With the retail industry savaged by the pandemic, the collapse of a mall megadeal, Simon Property Group’s $3.6 billion acquisition of Taubman Centers, was no surprise. Still, it gives us something new in the wave of deal implosions.

Simon has terminated the merger agreement and sued in a Michigan court to get out of the transaction, making some familiar arguments. It contends that Taubman has suffered a material adverse change, or MAC, to its operations. Simon also says that Taubman, like so many other companies these days, breached their agreement’s requirement to run business according to the “ordinary course.”

But here’s the twist.

Simon is not arguing, as Sycamore did when it got out of buying a stake in Victoria’s Secret, that Taubman violated the covenant by shutting. Instead, Simon claims that Taubman didn’t shut operations aggressively enough, by cutting employee salaries and the like.

A MAC clause lets a buyer walk away if the target is affected by an unexpected event with long-term significance. The clause in this deal excludes pandemics, but only to the extent that everyone in the industry is affected. Simon argues that Taubman has been hurt more than its peers.

There is also a venue wild card. Simon has sued in Michigan, where Taubman is incorporated. The sort of quick trial and resolution that could be expected in Delaware, where many of these cases are fought, is not as certain here. (To be sure, I previously taught law at Wayne State University in Detroit and thought these courts did a great job.)

In even the cities hardest hit by the pandemic, the malls run by Simon and Taubman could reopen within weeks. It could take longer to resolve this court fight.

The media industry is in turmoil

Protests over racial injustice following George Floyd’s killing have set off a reckoning in the American media — one that doesn’t appear to be waning.

Bloomberg, The Wall Street Journal and CNN joined The Times, The Philadelphia Inquirer and other outlets in facing arguments about corporate policies and editorial decisions regarding race and the protests, The Journal reports. In Bloomberg’s case, some reporters were reportedly angry that top editors said covering the Floyd protests wasn’t a focus, because it wasn’t a business story.

The trouble isn’t over at Condé Nast, even after two top executives were ousted amid accusations of racial discrimination. The Times’s Ed Lee reports further rumblings:

Some are still questioning the way Roger Lynch, the publisher’s C.E.O., has handled the issues. And revelations that Susan Plagemann, another top executive, had been heard saying that covers and fashion shoots should feature “more people who look like us” — i.e., white women who espouse a certain fashion aesthetic — have many insiders wondering why she’s still employed. (Ms. Plagemann has denied making such statements.)

Meanwhile, many top executives are at their vacation homes, The Times’s Ben Smith writes in a column — filed from East Hampton, N.Y. — that has generated a lot of buzz in the media world.

• The drug financing company Royalty Pharma raised $2.2 billion from its I.P.O. — the biggest in the U.S. so far this year. It’s part of a wave. (Reuters, MarketWatch)

• Germany will invest €300 million, or $337 million, in CureVac, which is working on a coronavirus vaccine, to rule out any foreign takeover. (FT)

• Epic Games, the maker of Fortnite, is reportedly close to raising $750 million at a valuation of $17 billion. (Bloomberg)

• The Trump administration’s on-again, off-again plan to spend trillions on infrastructure is reportedly on again. (Bloomberg)

• Jeff Bezos is willing to testify in a House antitrust investigation of Amazon. (NYT)

• WhatsApp is offering a money-transfer feature in Brazil. (TechCrunch)

• Six former eBay employees intimidated the writers of a newsletter — gulp — with deliveries of live cockroaches, among other things. (NYT)

• “Riding Out Quarantine With a Chatbot.” (NYT)

📞 Today at 2:30 p.m. Eastern, The Times’s “Corner Office” columnist David Gelles will hold a conference call with Maverick Carter, a director at Live Nation and co-founder (with his friend LeBron James) of SpringHill. They will discuss the protests, empowerment in entertainment, the future of media and more. R.S.V.P. here to join.