DealBook: Are We Past the Peak? 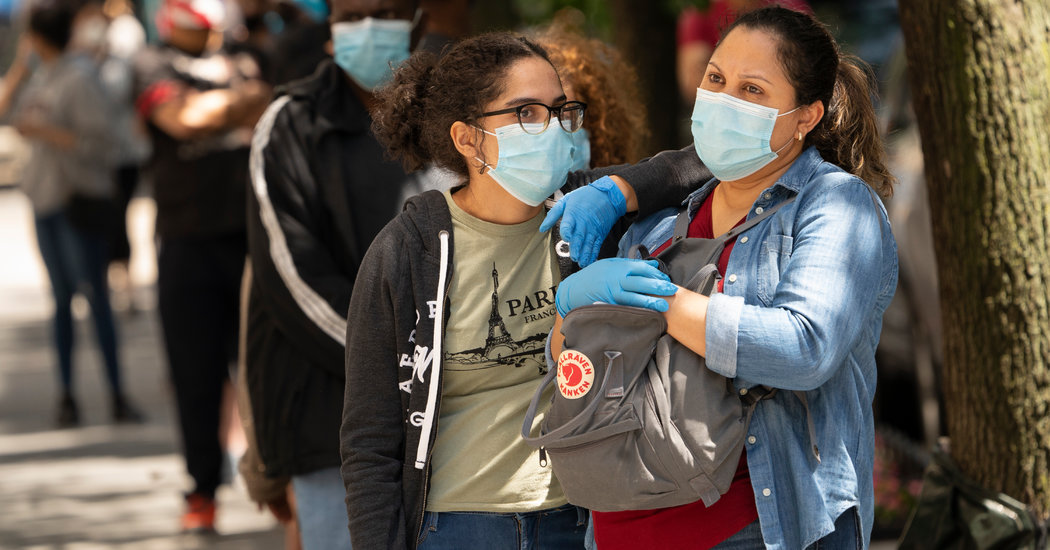 It’s darkest before the dawn

The worst may be over for the U.S. labor market. Economists expect another grim monthly employment report today — jobs data will be released at 8:30 a.m. Eastern — but then predict that the numbers will turn more positive.

The unemployment rate could hit 20 percent in May, the highest rate since the Great Depression.

• Other stats in the report are expected to be uniformly awful: Economists expect about 8 million jobs to have been lost in the month. That’s down from 20.5 million in April, but incredibly high by any other historical measure.

• A recent analysis of the labor market by race, by The Times’s Jeanna Smialek and Jim Tankersley, showed how minority unemployment is consistently higher than white unemployment. Less than half of black adults had a job in April, and with the spotlight on racial discrimination amid widespread social unrest, this report will provide more evidence of the stark economic inequality that persists, and is in some ways getting worse.

Signs of a more rapid reopening than expected have made forecasting harder than usual, but many economists expect that May will be the worst for the job market. The rising stock market reflects growing optimism, too.

• As workers from sectors hit hardest by the pandemic like travel and hospitality are gradually rehired, the risk of protracted economic pain hitting other sectors harder could hamper the recovery.

• Analysts at Goldman Sachs say that the most important thing to watch in the report is the number of workers on furlough or temporarily laid off — if these remain a large share of reported job losses, history suggests that the recovery will be faster.

Investors were disappointed in Slack, because the online messaging service didn’t report as big a boost in earnings as expected as a result of everyone working from home. (Business Insider)

President Trump nominated a Republican S.E.C. commissioner, Hester Peirce, to a second term, extending her tenure through 2025. The cryptocurrency world celebrated the move, since she is seen as an advocate, but others worried that not filling a vacancy reserved for a Democrat at the same time ignores the required partisan balance of the agency. (CoinDesk, @RevolvingDoorDC)

A judge denied Bernie Madoff’s request for an early release from prison. The 82-year-old Ponzi scheme operator, who received a 150-year sentence in 2009, asked to be let out after learning he had kidney disease. (NYT)

All eyes in the deal-making world this week have been on Bernard Arnault, the billionaire C.E.O. of the French luxury group LVMH, who may be rethinking his company’s $16.2 billion offer to buy Tiffany, which was announced in November.

Tiffany’s shares are trading at a big discount to LVMH’s offer price, making the deal look increasingly expensive in the post-pandemic world. As DealBook has reported, Mr. Arnault is weighing whether to demand a re-pricing of the deal.

The Deal Professor weighs in. Steven Davidoff Solomon of the U.C. Berkeley School of Law, who writes for DealBook as the Deal Professor, sent in his thoughts on Mr. Arnault’s options. After a close reading of the merger agreement, he calls the notion that the deal could be scrapped “more wishful thinking than reality.”

Importantly, this is a strategic transaction and not a private equity deal. Private equity deals are more complicated because they are dependent on financing — if the banks walk, then the deal goes away. Here, there is no “out” on financing, and Tiffany’s agreement allows it to seek specific performance, a legal term that means a court would force LVMH to close the deal.

Thus, LVMH is in the same situation Dow was with Rohm & Haas during the financial crisis: a tight agreement that provides little room for maneuver. LVMH could sue to get a haircut on the price, but it has limited options to actually avoid buying the ring.

One weird trick to make a C.E.O. millions

The company changed the price on which it based the conversion of stock awards that Mr. Hayes was owed before the merger of Raytheon and his company, United Technologies.

• Raytheon told The Times that the move was necessary to prevent Mr. Hayes and 3,900 other employees from losing compensation they were due.

• Peter and Anupreeta note that Raytheon recently cut salaries for thousands of employees by 10 percent and furloughed many of its workers.

This could undermine efforts to align executive pay with shareholder interests, according to some analysts. “Short-term volatility seems to be driving the decision making around these long-term compensation objectives,” said Brett Miller of Institutional Shareholder Services, the shareholder advisory firm.

Some lenders have come to the rescue of their minority-owned business clients. But they aren’t banks, as The Times’s Emily Flitter reports.

Community Development Financial Institutions are organizations that use a mix of government money and private donations to lend to small companies. Known as C.D.F.I.s, they have for decades provided credit to businesses that haven’t been able to borrow from traditional sources.

• Such groups have made loans to help start more than 400,000 businesses over the past 35 years, according to their trade group. Around 60 percent of their borrowers are minorities.

They’re stepping up in new ways in the wake of violence that erupted amid protests over the killing of George Floyd, Emily writes. One group, called Justine Petersen, had employees form a protective line around a borrower’s barbecue restaurant in Ferguson, Mo., the site of protests over the police shooting of Michael Brown in 2014.

It was a way to support clients “literally and figuratively,” a Justine Petersen loan officer said.

One of the most plugged-in tech journalists around, Kara Swisher, joined us on yesterday’s DealBook Debrief call to talk about Big Tech. (Listen to the replay here.) She’s not known for holding back her opinions, and certainly didn’t when discussing topics like Facebook’s responsibility for the content on its platform.

Forcing change at the tech giant might require making it liable for what appears on the network, whether posted by ordinary users or President Trump. “That’s going to create some different behaviors,” Kara said.

It might also require Mark Zuckerberg to make “better friends,” she added. Some of his current advisers include Joel Kaplan, the company’s policy chief, whom she says has “been trying to move them closer to the Trump administration.”

• She also highlighted who has left the company’s board, including Reed Hastings of Netflix and Ken Chenault, formerly of American Express. “Why would you leave the most powerful company in the world’s board?” she asked. “The people that left say a lot to me. I have great respect for the people who left.”

And here’s whom Kara recommends following for their thoughts on Big Tech:

• Brian Chesky of Airbnb, whom Kara said was a “really interesting character” dealing with the hits to his business in a thoughtful way.

• Shoshana Zuboff, whom Kara said she spoke to about so-called surveillance capitalism: “I thought she was on that super early and continues to be a really interesting thinker” on that topic.

• Mark Cuban, of whom Kara said: “Obviously I think Mark is interesting, all the time.” (Mr. Cuban recently commissioned a poll to see how he would do as a third-party presidential candidate.)

• Amazon is reportedly in talks to buy a $2 billion stake in the Indian wireless carrier Bharti Airtel. (Reuters)

• Shares in ZoomInfo, a maker of sales and marketing software that was the first big tech I.P.O. during the pandemic, leapt 60 percent in their market debut yesterday. (CNBC)

• Elon Musk said that Amazon should be broken up after the e-commerce giant rejected a book about the pandemic by a controversial author. (WSJ)

• “When offices reopen, will Silicon Valley build a health system for its own?” (Protocol)

• Oil prices may be rising again, but the industry faces a long and tortured recovery. (Axios)

• Lego said that it would pull advertising for police-themed toys and donate $4 million to organizations that educate children about racial equality. (Vulture)