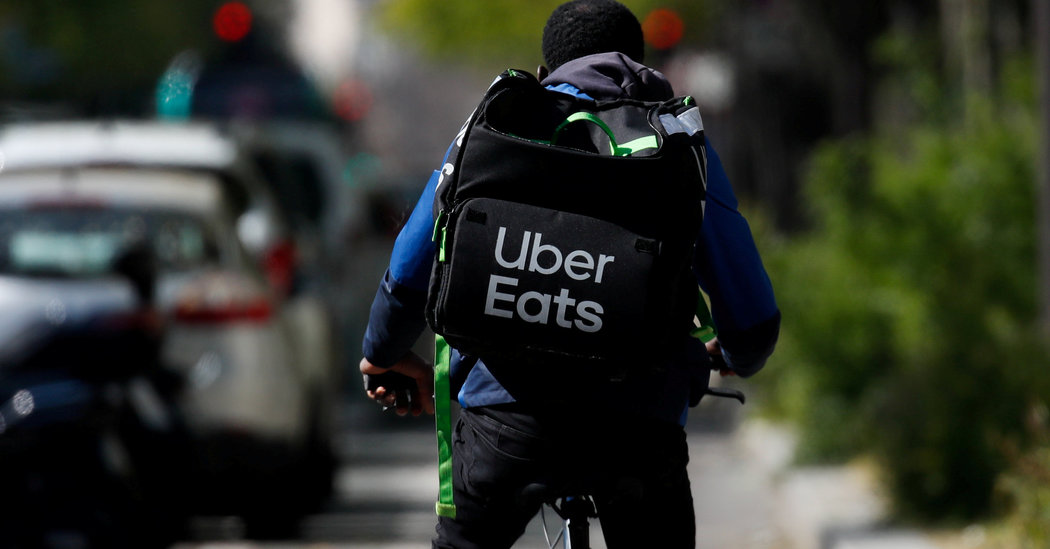 Why Uber wants to gobble up Grubhub

Deal makers have warned that merger prospects will suffer during the pandemic. But as Uber’s negotiations to buy Grubhub show, there’s still an appetite for some transactions, particularly if a business’s survival may be at stake.

Uber approached its food delivery rival after the pandemic hit, The Times’s Mike Isaac and Kate Conger report. Grubhub responded by asking for two Uber shares for each of its own, for a total valuation of $6.1 billion. (Standard deal caveat: Talks are ongoing and may fall apart.)

Overall deal activity has sunk this year. About $832 billion in transactions were announced through last Thursday, according to Refinitiv, down nearly 40 percent from a year ago. M.&A. relies on boardroom confidence, and the pandemic has crushed that.

• Deal news of late has mostly been about transactions breaking. The agreement to sell control of Victoria’s Secret fell apart last week — more on that below — and yesterday, the French insurer Covea walked away from a $9 billion acquisition of a rival, PartnerRe.

But this is a deal investors love. Grubhub’s shares soared 29 percent yesterday, while Uber’s rose over 2 percent. The delivery industry’s price wars — a byproduct of the billions that investors have poured into Uber and the like — would likely end if there were fewer players competing for customers.

Some in Washington are worried about consolidation. Representative David Cicilline, the Rhode Island Democrat who leads the House’s antitrust panel (and called for a moratorium on most mergers during the pandemic) said yesterday: “We cannot allow these corporations to monopolize food delivery, especially amid a crisis that is rendering American families and local restaurants more dependent than ever on these very services.”

Shareholder activism has largely gone into hibernation during the pandemic. But Elliott, the $40 billion heavyweight in the business, bucked that trend by renewing a campaign to shake up the drugmaker Alexion Pharmaceuticals, which specializes in treatments for rare disorders.

• The hedge fund has called for changes at Alexion since late 2017. But in December, the company rejected what it said was Elliott’s private recommendation to sell itself.

The pandemic cut short what was looking like a robust year for activism. More than 40 campaigns were launched in January and February alone, according to Lazard.

• That said, some hedge funds have quietly increased their stakes in target companies, waiting for the right time to strike.

Elliott was confident in taking on Alexion during the pandemic because the health care sector has been less affected by the turmoil. The hedge fund has argued that Alexion could be attractive to a buyer because of its lucrative portfolio of treatments.

🏛 House Democrats unveiled a $3 trillion pandemic relief proposal, focused on aid for states and another round of direct payments to Americans. The Republican-controlled Senate immediately rejected it.

💰 Changes to the rules for small-business rescue loans have vexed borrowers. The Wall Street Journal notes that there have been nine “interim final rules” so far.

😷 Workers are pushing companies to keep safety measures in place, fearing that measures on limiting customer traffic and providing protective equipment will be rolled back too rapidly.

Steven Davidoff Solomon, a.k.a. the Deal Professor, is a professor at the U.C. Berkeley School of Law and the faculty co-director at the Berkeley Center for Law, Business and the Economy. Here, he considers what went wrong in one of the highest-profile lawsuits over a busted deal — so far — during the pandemic.

After a flurry of lawsuits, L Brands, the owner of Victoria’s Secret abruptly settled its differences with the private equity firm Sycamore last week and walked away from a deal to sell control of the lingerie retailer. With no termination fee or any other money changing hands, the settlement gave some market watchers whiplash. What happened?

On April 22, Sycamore, which was advised by Kirkland & Ellis, tried to terminate the agreement by filing suit in Delaware’s Court of Chancery. The next day, L Brands, advised by Davis Polk & Wardwell, countersued and argued that Sycamore was legally required to complete the transaction.

Their arguments were never tested before a judge, and it could be that L Brands simply didn’t want to work with such a reluctant partner. A more intriguing explanation, however, has to do with the fine print of the deal, and the nature of private equity transactions.

This model came under stress during the 2008 financial crisis, with many private equity firms simply paying a termination fee, typically about 3 percent of the deal value, to walk away. (I wrote a book about the failings of these structures.)

After the crisis, lawyers for target companies tightened their contracts: Nowadays, the seller can force the shell company to draw upon its commitment letters to finalize the deal. If this isn’t possible, private equity buyers must often pay a termination fee that’s 6 to 7 percent of the deal value.

This is where things get interesting with Victoria’s Secret. When L Brands sued Sycamore, it was demanding either the consummation of the deal (“specific performance” in legal lingo) or “monetary damages.”

But Sycamore’s equity commitment letter contained a now-common provision where if the seller sought any remedy other than specific performance, the letter terminated automatically. Indeed, the day after L Brands countersued, Sycamore brought another suit to terminate the equity commitment letter — and by extension, the deal — on these grounds. Just over a week later, the two sides settled.

The lesson for future fights over busted deals is that desperate sellers need to be careful what they wish for.

There may be no going back

Will office towers in big cities like New York ever be full again? The mass work-from-home experiment of 2020 has some executives rethinking their real estate footprint, The Times’s Matthew Haag writes.

“Looking forward, are people going to want to crowd into offices?” asks Diane Ramirez, the chief executive of Halstead, which has more than a thousand real estate agents in the New York region. (In other words, she should know.)

• Barclays’ C.E.O., Jes Staley, said recently that “the notion of putting 7,000 people in a building may be a thing of the past.”

• John Wren, the C.E.O. of Omnicom: “We’ve seen firsthand that our people can be just as productive at home as they are in the office.”

• Richard Fairbank, the C.E.O. of Capital One: “People are all in. They’re engaged, and the productivity is extraordinary from people working from home.”

• John Rainey, the C.F.O. of PayPal: “It’s maybe sort of counterintuitive, but we have the highest level of productivity among our work force that we’ve ever seen in our history.”

• The messaging service Telegram will end work on its blockchain project after fighting with the S.E.C. (Decrypt)

• Patagonia was one of the first retailers to shut during the pandemic. Its socially conscious corporate governance means it may be one of the last to reopen. (NYT)