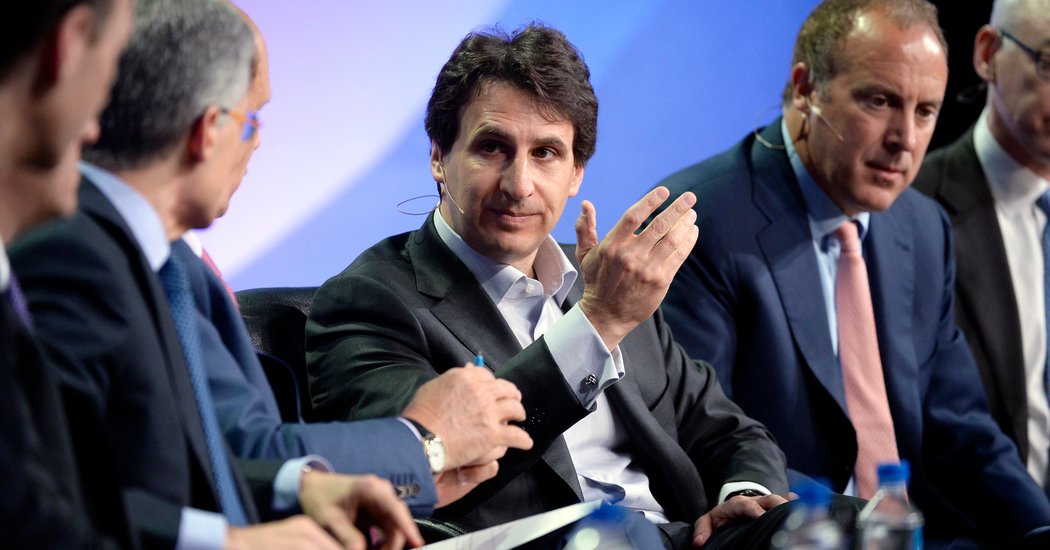 Good morning. A reminder that our inaugural DealBook Helpline call is today at 11 a.m. Eastern, answering your questions about the day-to-day challenges of managing a business during the pandemic. How do you renegotiate rent? Decide between layoffs or furloughs? What’s the best way to deal with suppliers? To join, R.S.V.P. here. (Was this email forwarded to you? Sign up here.)

The Deal Professor: Money and morals

Steven Davidoff Solomon, a.k.a. “The Deal Professor,” is the faculty director at the Berkeley Center for Law, Business and the Economy

In the competition for a federal bailout, venture capital won the first round. Now, private equity is fighting back — and winning.

The first round was the $350 billion Paycheck Protection Program, which provides forgivable loans of up to 2.5 times companies’ monthly payroll. The program is limited to businesses with no more than 500 employees, and it specifically excludes financial firms.

Businesses are flocking to the program, but the Small Business Administration initially barred most companies that are funded by venture and P.E. firms. The administration’s affiliate rule lumps together businesses with common controlling shareholders, so all of a firm’s majority-owned businesses count toward the employee limit. Private equity has lobbied vociferously for a waiver, but the government has not granted one.

For most venture-backed companies, the problem is not majority ownership, but that the affiliate rule covers companies where an investor has “negative control” rights, like the ability to veto board decisions. Faced with forgoing a potential government grant or losing control rights, venture firms have rushed to eliminate these rights. Their extensive banking relationships also make them more attractive to lenders than unfamiliar mom and pop businesses.

This only remaining issue for venture firms is a moral one: Do they really need these loans? After all, V.C. and P.E. funds have nearly $1.5 trillion in uncalled capital, otherwise known as dry powder. The number of venture-backed companies that refused to participate in the program is unknown, but anecdotally there are some.

The second round of bailout wrangling is where private equity is coming out on top.

Apollo successfully lobbied for another Fed program — the $100 billion Term Asset-Backed Securities Loan Facility — to purchase a wider range of investment-grade securities, particularly the mortgage-backed and commercial real estate debt popular among many P.E. firms. The need for this is obvious: If landlords don’t get paid (however politically popular that is) there are mass disruptions to the economy. P.E. firms can also get in on the Fed’s $600 billion Main Street Business Lending Program for midsize companies.

There’s widespread criticism of bailing out P.E. funds. But whatever you think about this, public pensions are dependent on private equity investments for returns, and their portfolio companies employ millions. Frankly, the industry is too politically savvy to let these critical arguments stand in the way.

I would expect the next round of stimulus to be even more friendly to private equity. Unlike venture funds, P.E. financiers do not have the same moral misgivings about lobbying aggressively for federal assistance.

A standoff over lockdowns

As the Trump administration pushes back against reports about perceived delays in its initial response to the coronavirus outbreak, it is also suggesting that it will soon lift restrictions on the economy. “We’re very close to completing a plan to open our country. Hopefully, even ahead of schedule,” President Trump said yesterday.

Who’s on the council to reopen America? A task force has been established for the lifting of restrictions, but its membership remains a mystery. Input will also come from existing committees and unnamed business leaders, administration officials suggest.

• The U.S. Chamber of Commerce sent a letter to members detailing the (many) questions that must be answered before all businesses reopen. “We don’t have all the answers today — or even all the questions,” it said.

• Peter Navarro, the White House trade adviser, told Alan Rappeport of The Times that medical experts and others pushing for a prolonged shutdown were “tone deaf” to the dangers:

“They piously preen on their soap boxes speaking only half of the medical truth without reference or regard for the other half of the equation, which is the very real mortal dangers associated with the closure of the economy for an extended period.”

Whose call is it, anyway? Regional groups of governors are coordinating a timeline for reopening their states. President Trump, however, insists only he has “total” authority to reopen the economy. Expect a clash between advice from federal and state officials.

Does it matter? As Jim Tankersley of The Times writes, the economy began to slow before the lockdowns were announced, as nervous consumers stayed home because of their own concerns about the virus. The data suggests that those same worries will keep economic activity subdued after restrictions are lifted.

Treasury Secretary Steven Mnuchin is reportedly holding firm on conditions that airlines must accept in order to receive taxpayer rescue money, according to Bloomberg. It may provide a template for aid to other industries.

Among the Treasury Department’s demands are that 30 percent of assistance comes in the form of loans that are repaid within five years. The U.S. government would also receive equity warrants worth around 10 percent of the loans — meaning that carriers would give taxpayers stock.

Airlines, their unions and Democratic lawmakers are irate, saying this wasn’t the intent of the billions in aid allocated to airlines in the $2 trillion coronavirus bill passed last month.

• Carriers may not have much of a choice. United and Delta are reportedly considering selling frequent-flier miles back to their credit card partners at a discount to raise cash, according to The Wall Street Journal.

The Treasury Department’s demands “may set the tone” for other bailout negotiations, CNBC adds. Policymakers are mindful of the criticism that followed the bailouts of automakers and banks during the 2008 financial crisis.

In other airline news: Delta is temporarily changing how passengers board, with travelers in the back going first to minimize contact with others.

The Vision Fund is dragging SoftBank down

SoftBank was always expected to take a big hit from its $100 billion Vision Fund, as the coronavirus whacks its investments. Now, Masa Son’s tech conglomerate has put a number to the pain — and it’s big.

The Vision Fund is expected to have lost nearly $17 billion in the group’s the most recent fiscal year, which ended in March, “due to the deteriorating market environment.” What happened? Just take a look at the fund’s portfolio, which is heavily concentrated in money-losing ride-hailing and hospitality companies that were hit hard by the pandemic. That’s on top of other bad bets made outside the fund, like WeWork and the now-bankrupt satellite company OneWeb.

SoftBank itself is likely to lose ¥750 billion, or around $7 billion, for the year, its first annual loss in 15 years.

The Vision Fund has little margin for error, The Wall Street Journal points out, since several investors own preferred shares that receive a 7.5 percent annual dividend and can withdraw their money before other investors, including SoftBank itself. Bloomberg Opinion calculates that the dividend payments amount to $3 billion a year.

• Vince McMahon’s XFL football league has filed for bankruptcy protection, and will try to sell itself. (WSJ)

• EBay has hired Jamie Iannone, one of Walmart’s top e-commerce executives, as its new C.E.O. (CNBC)