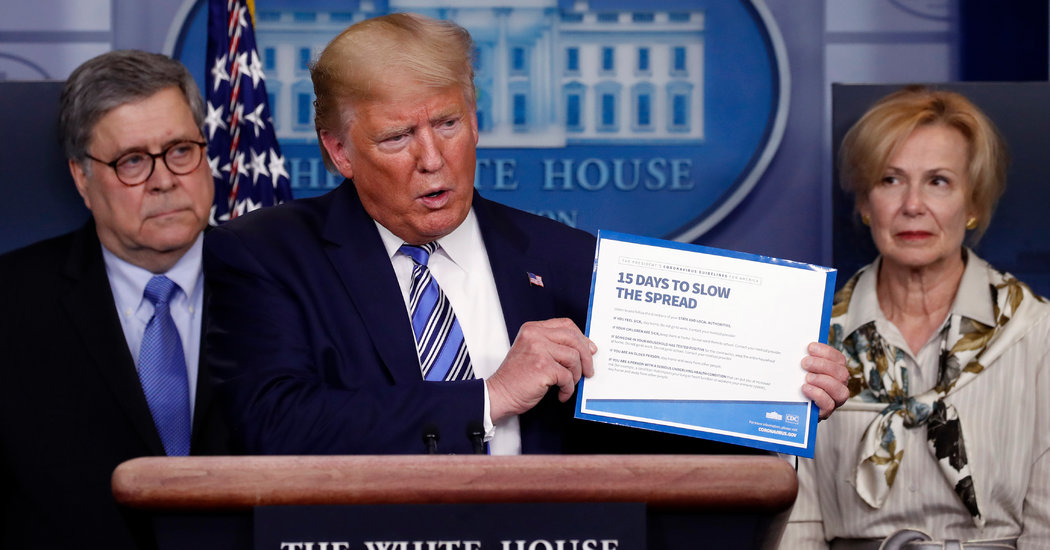 President Trump signaled yesterday that he’s open to lifting restrictions soon on social distancing in an effort to get the American economy back to normal. It’s a moral trade-off between saving lives and sustaining economic livelihoods.

He has heard publicly and privately from advisers and business leaders who’ve repeated variations on the line “the cure can’t be worse than the disease,” including the former Goldman Sachs executives Lloyd Blankfein and Gary Cohn and the White House economic adviser Larry Kudlow. In announcing that he may relax social restriction guidelines, Mr. Trump said yesterday, “America will again — and soon — be open for business.”

Behind his change in thinking is fear of plunging markets and a shut-down American economy. “He is worried about the impact of soaring unemployment numbers and severe economic contraction on his 2020 re-election bid,” the WaPo reports.

Loosening restrictions after what the White House has called “15 Days to Slow the Spread” — which runs until Monday — represents a risky gamble. It’s the opposite tack of countries like Italy, France and now Britain, which last night announced a virtual lockdown that closes most businesses and restricts people’s movements. The Dutch recently extended a ban on gatherings until June 1.

• It’s also against the advice of Mr. Trump’s health experts, like Dr. Anthony Fauci of the National Institute of Allergy and Infectious Diseases. Mr. Trump is reportedly losing his patience with the outspoken Dr. Fauci, but still listens to his advice. (That said, he’s been missing from the White House’s daily briefing in recent days.)

• What remains to be seen: Whether the governors of states that have imposed strict lockdowns, including New York and California, will comply.

The Fed is buying E.T.F.s now

The central bank is pulling out all the stops, including a raft of new programs to unclog credit markets and lend directly to companies hit by the economic downturn.

The central bank is offering what looks like infinite money — officially, “the amounts needed to support smooth market functioning.” That means it will buy bonds in unlimited quantities, and not just the usual government-backed debt: For the first time, the Fed will purchase corporate bonds, including exchange-traded funds that track these bonds. It also said it would soon unveil a “Main Street Business Lending Program” to cover smaller firms that don’t tend to tap the bond markets.

• What does it all mean? The NYT’s Neil Irwin breaks down the strategy, while Ben Casselman answers common questions about how it works.

Markets said “meh.” Although the Fed has effectively cut interest rates to zero and promised to run its money printing presses at full speed, the stock market fell yesterday. All eyes are now on Congress, as lawmakers wrangle over a stimulus bill aimed at the workers and companies that the Fed’s programs don’t address, at least not directly.

Futures markets are up today on signs of a compromise in Congress over a $2 trillion economic package. Steven Rattner, who led the 2009 auto bailout under President Barack Obama, writes in an NYT opinion piece: “Distasteful as they may be, we need rescue plans urgently, for both small and large business, and we need to apply them prudently and wisely.”

Big tech is getting even bigger

“When the economy does eventually improve, Big Tech could benefit from changes in consumer habits. And despite more than 18 months of criticism from lawmakers, regulators and competitors before the pandemic hit the United States, the biggest companies are likely to finish the year stronger than ever.”

It’s an emerging theme, with The Information detailing the end of the pre-crisis “techlash” and Medium’s Marker explaining Amazon’s “mind-boggling image makeover.”

Away from the trillion-dollar giants, no company has thrived in the stay-at-home economy more than Zoom, the videoconferencing company. The company’s shares have more than doubled this year and, as many have pointed out, Zoom is now worth more in market cap than airlines, hotels and other companies that rely on people moving around.

What’s next for SoftBank?

News that the beleaguered Japanese company will sell up to $41 billion worth of assets to buy back $18 billion worth of shares and pay down debt heartened investors. But the move raises questions about the conglomerate’s future.

SoftBank shareholders loved yesterday’s announcement, as the company’s shares closed up 19 percent in Tokyo today. Bondholders also applauded the move, with the price of some of its bonds rising as well.

• Among those pleased with the move is Elliott Management, the activist investor that had called for a buyback of up to $20 billion, Michael has learned. The hedge fund has argued that SoftBank — whose $70 billion market value is well below its roughly $250 billion sum-of-the-parts valuation — is effectively buying back shares in itself at 30 cents on the dollar.

But SoftBank will have to raise money by selling assets in a chaotic market, potentially fetching poor prices. It’s reportedly considering selling up to $15 billion worth of its $120 billion stake in Alibaba of China, and its stakes in its Japanese telecom affiliate and in Sprint in the U.S. are also on the table. One investor told Michael that the trade-off made sense, however: The buybacks will generate more value than the assets being sold, which were overdue to be offloaded anyway.

Will SoftBank now retrench? It has long been known for ambitious deal-making, especially through its Vision Fund. But yesterday’s move could be read as adopting a more defensive posture. And many of its investments are in businesses vulnerable to the coronavirus crisis, like Uber, WeWork and the Indian hospitality company Oyo.

• Striking scenes of normally bustling cities that are now all but empty are chronicled in this series by NYT photographers.

• The NYT’s Opinion team created some amazing maps that track smartphone movements across the U.S.

• The CityMapper app is publishing a daily index of how much its users around the world are moving around compared with normal times: On Sunday, Milan was 3 percent of normal, New York City was 8 percent and London was 23 percent (which may explain the lockdown that the British government announced last night).

• How green should any economic stimulus package be? (Bloomberg)

• The sports goods retailer Modell halted its going-out-of-business sale because … there are no shoppers. (Bloomberg)

• Even spies have to work from home these days. (Time)