DealBook: Markets Get Punched in the Face 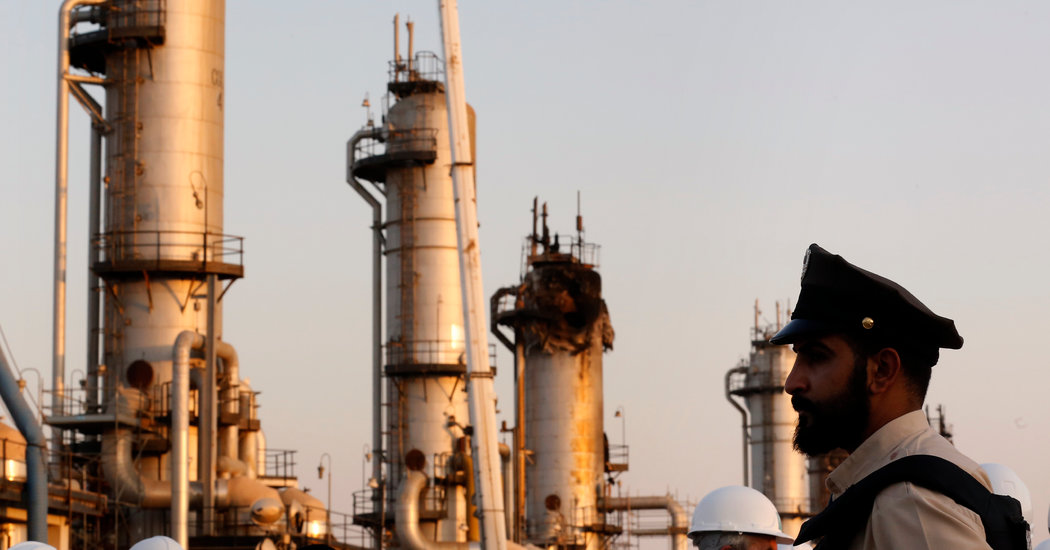 Market turmoil shows no signs of letting up, as fears over the spread of the coronavirus were met by an oil price war between two of the world’s largest producers. Crude oil prices plunged as much as 30 percent when traders returned from the weekend, the steepest drop in decades. The reverberations are being felt across the financial markets.

What happened? Saudi Arabia was unable to persuade fellow OPEC members and Russia to cut oil production to increase prices, which have sunk as the coronavirus outbreak dents demand. Russia refused because this would help American shale producers, and Moscow is angry about U.S. sanctions on Russian energy companies. The Saudis retaliated by raising production and slashing prices for its considerable crude output, and here we are.

Isn’t cheaper oil a good thing? Over time, the price at the pump will fall, and oil-dependent industries like airlines will benefit — depending, of course, on people’s appetite for travel in the coronavirus era. But market watchers were already worried about junk bonds, a $1.3 trillion market that showed signs of stress during the market rout. Deeply indebted, cash-strapped, price-sensitive energy companies are big borrowers in the “high yield” market; if they can’t survive the price war, their collapse will hit workers and lenders hard.

What’s the end game? An aggressive oil price war at a time of falling demand could lead to oil falling to $20 per barrel, down more than 50 percent from Friday’s close, according to Goldman Sachs. Markets are pricing in another big Fed rate cut this month, which would push benchmark U.S. rates close to zero.

Buckle up: It’s going to be bumpy. The NYT chronicled the past two weeks of market turmoil through the eyes of seven traders. Life won’t get any easier for them today, with Asian and European stocks falling sharply and U.S. futures implying a 5 percent decline at the open. Ipek Ozkardeskaya of Swissquote bank summed it up bluntly: “Russia punched investors in the face.”

Will the rest of the West embrace Italy-style lockdowns?

After Italy locked down much of the country’s north yesterday, other governments are weighing whether to go as far in securing their populations from the coronavirus.

“We are facing an emergency,” said Prime Minister Giuseppe Conte of Italy, which had about 7,400 confirmed cases as of Monday, and 366 deaths. The plan, which will squeeze the economic engines of Milan and Venice, will affect about 16 million people and about a quarter of Italy’s G.D.P. (One big question: Will Italians follow the rules?)

The U.S. may need stricter controls as well. Nearly 600 cases of coronavirus had been confirmed as of this weekend, prompting schools and universities to close and conferences — including the South by Southwest tech and culture festival — to cancel. As public health officials move toward the “mitigation” phase of the virus response, the specter of isolation and self-distancing is taking hold.

The billionaire investor proposed steps in the FT over the weekend that he said would help make capitalism more balanced. The short answer: more disclosure.

• Companies should conduct a “financial stress test” of their employees to gauge their financial well-being, he said. PayPal, for instance, learned that 60 percent of its hourly and call center employees struggled to make ends meet. That compelled the company to raise wages and improve its health care plans.

• They should also disclose information on their work forces, including numbers of full-time versus part-time employees, diversity and gender pay gaps, he argued.

How all of this helps, according to Mr. Jones: “Disclosures improve capitalism. The answer is simple: Awareness is the basis for action. If you don’t measure something, you will struggle to change it.”

Predictions of start-up doom have been premature

Our colleague Shira Ovide, the writer of a forthcoming NYT tech newsletter, chimes in …

Sequoia, a prominent investor in tech start-ups, warned young companies last week to prepare for the possibility of a coronavirus-related downturn. The venture firm sounded a similar alarm in 2008 about the financial crisis, which gives it credibility in doomsday predictions. But investors have warned with regularity over the past decade that the start-up boom was about to bust. Those predictions have mostly been wrong. So far.

2011: “Winter is coming. Entrepreneurs should be prepared.” Eric Ries, the author of “The Lean Startup,” sounded the alarm as stock markets were gyrating wildly, in part because of economic problems in Europe. Surely the start-up boom would end?

Result: It did not.

2012: “Lower your expectations for fund-raising.” Paul Graham of Y Combinator wrote that note after Facebook’s initial public offering struggled, and warned that start-up investments would dry up.

Result: Investment did not disappear. And Facebook’s stock price has climbed more than 300 percent since its I.P.O.

2015: “I do think you’ll see some dead unicorns this year.” Bill Gurley of Benchmark, a Silicon Valley investor who is a pied piper of pessimists, warned that many highly valued young companies were vulnerable to ruin.

Result: There was a pullback in venture capital investments, and some start-ups died. But this was more like air deflating from a balloon than a bubble bursting. And then start-up mania grew even more manic.

2018: “It’s time to wait patiently as the air is slowly let out of this bizarre Ponzi balloon.” Chamath Palihapitiya of Social Capital wrote that his firm would “find comfort in the teaching of Andy Grove that only the paranoid survive.”

Result: This warning — that an overabundance of investment money was funding a mirage of start-up growth — was correct. But the blowup from this scenario hasn’t happened yet.

2019: Entrepreneurs “need 18 to 24 months of runway right now.” Hits to the value of WeWork and Uber created anxiety that start-up irrational exuberance would end, as expressed by Danny Rimer, a partner at Index Ventures.

Result: Some data showed a sag in start-up investments in the later part of 2019, but irrational exuberance largely continued. (OK, not for WeWork). American start-ups received $136.5 billion in investments last year, surpassing the nominal total from the peak of the dot-com boom.

The party can’t go on forever, but the infamous question must be asked: Is this time different?

🏦 Wells Fargo execs and directors begin a series of hearings in front of the House Committee on Financial Services: The bank’s C.E.O., Charles Scharf, testifies on Tuesday. Its chairwoman, Elizabeth Duke, and a director, James Quigley, appear on Wednesday.

💶 The European Central Bank meets on Thursday and is expected to announce new stimulus measures, potentially cutting its key interest rate even further below zero.

• The Trump administration ordered a Chinese company to divest an American maker of cloud software for hotel companies over national security concerns. (NYT)

• The valuation of The Wing, the women-focused co-working start-up, reportedly shrank 45 percent when WeWork sold its stake in the business to other investors. (Bloomberg)

• Britain’s forthcoming budget will include a new tax on big internet companies, complicating the prospects of a U.S. trade deal. (FT)

• Tech companies are calling for legal limits on facial-recognition software in the hopes of heading off more restrictive bans on the technology. (WSJ)

• “Smile! Your Boss Is Tracking Your Happiness.” (WSJ)