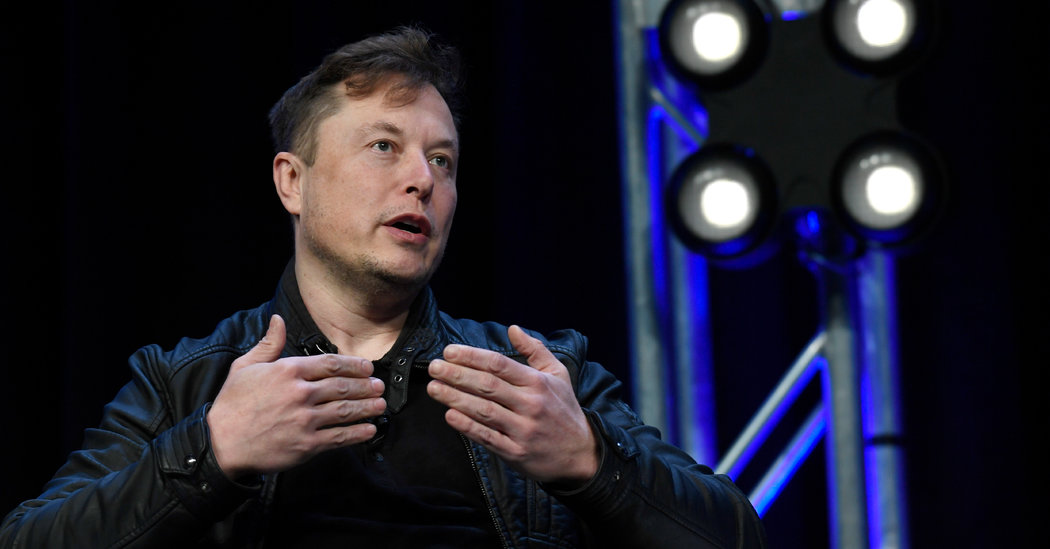 Good morning. Who’s paying for all these bailouts? Do deficits matter? Join our DealBook Debrief call with the Nobel-winning economist Paul Krugman today at 11 a.m. Eastern to discuss these questions and more. R.S.V.P. here. (Was this email forwarded to you? Sign up here.)

What everybody is talking about

As big companies release their first-quarter earnings this week, one subject is dominating the discussion: how the pandemic will affect future results. (After all, the first three months of 2020 seem like ancient history.) As revealed on conference calls with investors, executives are navigating the lockdowns in radically different ways.

Tesla’s Elon Musk ranted about stay-at-home orders. In a profanity-laced tirade yesterday, the electric carmaker’s chief likened lockdown orders to “forcibly imprisoning people in their homes against all their constitutional rights.” Then he really let rip:

• Tesla has clashed with officials in California over the closure of its factory there, and Mr. Musk has a history of downplaying the risks of the coronavirus.

Facebook’s Mark Zuckerberg worried about a second wave of infections. “The impact on our business has been significant,” the Facebook founder told investors yesterday, adding that the economic fallout from the pandemic may last longer than anticipated. But he continued:

“While there are massive societal costs from the current shelter in place restrictions, I worry that reopening certain places too quickly before infection rates have been reduced to very minimal levels, will almost guarantee future outbreaks and worse longer-term health and economic outcomes.”

• Facebook said that a drop in advertising in the early stages of the outbreak had stabilized, and the company’s shares jumped 9 percent in after-hours trading.

Microsoft and Alphabet are doing well. Microsoft’s Satya Nadella said that “we’ve seen two years’ worth of digital transformation in two months,” a boost to the company’s cloud-computing and remote collaboration businesses. Sundar Pichai of Alphabet took a similar tack, noting that “we’ll see a long-term acceleration of movement from businesses to digital services, including increased online work, education, medicine, shopping and entertainment. These changes will be significant and lasting.” Both companies reported better-than-expected financial results.

In other earnings news: Shell cut its dividend for the first time since World War II and SoftBank said the loss in its latest fiscal year will be even bigger than it had warned. And the analyst David Risinger of Morgan Stanley managed to bring a little levity to normally staid calls — during a pandemic no less — when he prefaced his question for Merck executives with sarcasm:

“Could you please comment on the potential to: one, inject disinfectants; and two, to use UV rays inside the body to cure Covid? No, I’m just kidding, I’m sorry. So on a more serious note …”

The stock market popped yesterday after some promising news about the potential of Gilead’s antiviral drug, remdesivir, as a treatment for coronavirus.

A federal drug trial showed quicker recoveries in patients treated with remdesivir. But there was no statistically significant difference in the number of deaths.

• Dr. Anthony Fauci, the director of the National Institute of Allergy and Infectious Diseases, called the trial “a very important proof of concept.” The F.D.A. is preparing to give the drug emergency approval, The Times reports.

That was enough for investors to shrug off gloomy economic news. The S&P 500 jumped nearly 3 percent, and shares in Gilead closed up nearly 6 percent.

But there’s reason for caution. A separate study of remdesivir conducted in China, published in The Lancet yesterday, found no benefit compared with a placebo. Other drugs that the F.D.A. has given emergency approval, like hydroxychloroquine, also failed to show much positive effect.

• Some scientists worry that complicated results are being misinterpreted or released in political settings instead of clinical ones: “This is too important to be handled in such a sloppy fashion,” Dr. Steven Nissen of the Cleveland Clinic told The Times.

The Fed cut interest rates to just above zero and unveiled programs to pump trillions of dollars into the economy. What else can be done? Judging by his news conference yesterday, its chairman, Jay Powell, is now engaging in a sort of rhetorical stimulus, speaking unusually frankly for a central banker.

“This is the time to use the great fiscal power of the United States.” Mr. Powell put the onus on Congress to act more aggressively. The necessary policies, he said plainly, “will come with a hefty price tag.”

“It is heartbreaking, frankly.” Mr. Powell lamented that the pre-pandemic labor market was particularly strong for low-income workers and minority communities. “All the more need for our urgent response, and also that of Congress,” he added.

“We will not run out of money.” Enough said.

France wants to remake Air France: To receive $7.6 billion in aid, the airline will have to cut carbon emissions and less lucrative domestic flights. American policymakers have imposed few conditions on U.S. carriers.

Battle of the billionaires: Bill Cohan writes in The Times’s Opinion page that private equity magnates are divided over federal rescues. On one side are Apollo Global Management and the Carlyle Group, which want access to the small-business loan program for their debt-heavy portfolio companies. On the other are debt investors like Howard Marks of Oaktree, who noted recently that “capitalism without bankruptcy is like Catholicism without hell.”

A top Mueller deputy heads back to private practice

Andrew Weissmann, one of the lead prosecutors for Bob Mueller’s special counsel team, will join the law firm Jenner & Block as a partner on July 1.

Mr. Weissmann was one of Mr. Mueller’s senior lieutenants, helping lead cases against the former Trump campaign officials Paul Manafort and Rick Gates. He’s long been known as a “legal pit bull,” serving as a federal prosecutor in the Enron investigation and many cases against mafia officials; he’s also been the general counsel of the F.B.I. and led the fraud section in the Justice Department’s criminal division.

• And he has signed a book deal, promising to write about his experiences on Mr. Mueller’s team.

He will co-chair Jenner & Block’s investigations practice. It’s a homecoming of sorts: Mr. Weissmann worked there as a partner there from 2006 to 2011.

• Arctos Sports Partners, a new investment firm, wants to raise up to $1.75 billion to buy stakes in pro teams. (Bloomberg)

• Steven Rattner, who led the 2008 auto industry bailouts, gives the coronavirus stimulus package an “A+ for speed but a B- for quality.” (NYT Opinion)

• Zoom doesn’t have as many users as it suggested. (Business Insider)

• The Trump administration accused Amazon of ignoring the sale of counterfeit items on its overseas platforms. (WSJ)