DealBook: Reopening, Ready or Not 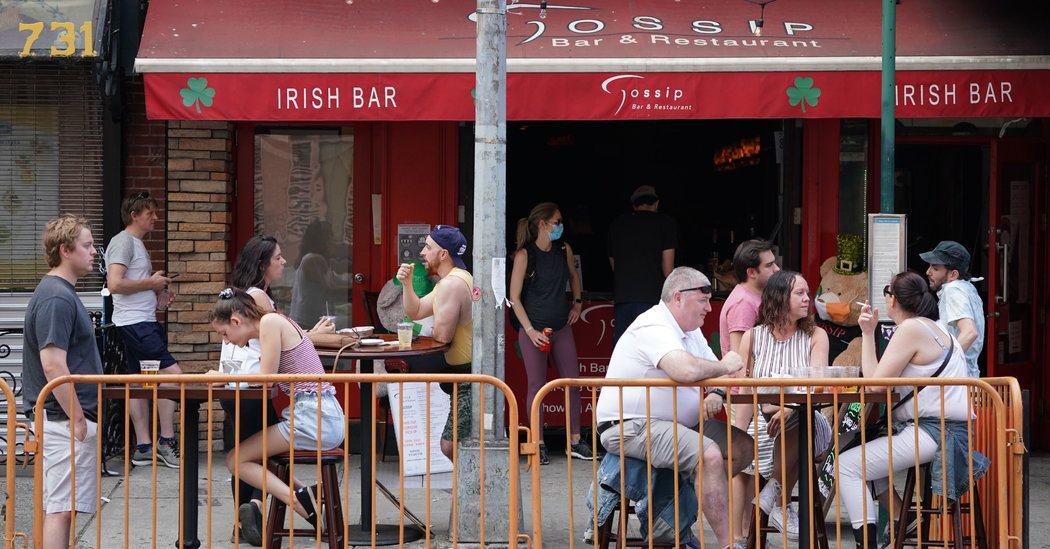 Healthcare experts around the world are worried about a resurgence in coronavirus cases. But like it or not, governments are reopening their economies, and consumers are ready — if also wary.

People’s tolerance for sacrifices to contain the virus is “collapsing,” according to surveys in several countries by Deutsche Bank. The latest poll, taken in early June, showed that far fewer people were willing to give up things like travel, seeing friends and going to shops than they were a few months ago, “with France appearing to lead the way.”

DealBook has an exclusive look at Zagat’s study of the future of dining, based on an online survey of 6,775 diners conducted by the restaurant guide and the James Beard Foundation. Some takeaways from the poll:

• Two-thirds of people will wait more than a week after restaurants reopen, and the vast majority of that group would wait over three months.

“People want to be back at restaurants,” Chris Stang, the C.E.O. of Zagat, told Michael. (“I’m ready to go tomorrow,” he added.) But the already embattled restaurant business could struggle to adopt these measures and still turn any sort of profit. Governments, he believes, will need to provide some economic assistance to keep restaurants alive: “There’s going to need to be a plan beyond, ‘Hey, open up and good luck.’”

• The Times’s Nathaniel Popper reports on how restaurants feel gouged over fees from apps like Grubhub, DoorDash and Uber Eats.

• The movie chain AMC said it would reopen “almost all” of its theaters in the U.S. and Britain by next month, after reporting a $2.2 billion loss last quarter.

The funeral of George Floyd, whose death in police custody sparked protests across America and then around the world, was held in Houston yesterday. It was “both a national reckoning and a moment of personal mourning,” The Times’s Manny Fernandez and Patricia Mazzei write.

The New York Stock Exchange fell silent for eight minutes and 46 seconds, the length of time that a Minneapolis police officer knelt on Mr. Floyd’s neck as he repeatedly said, “I can’t breathe.” Starting at noon, to coincide with the funeral, it was the longest moment of silence the exchange has observed. (Watch the video here.)

The business world’s reckoning with racial discrimination is gathering pace. Many companies have expressed solidarity with protesters, but the spotlight has quickly shifted to what actions they might take to back up their words. Racial economic inequality is stark, and in some ways has been getting worse.

• Adidas said that at least 30 percent of its new hires in North America would come from black and Latino backgrounds.

• Twitter and Square, both run by Jack Dorsey, said that June 19 — or Juneteenth, a date celebrating the end of slavery in America — would become a company holiday. Mr. Dorsey called it “a day for celebration, education, and connection.”

• The long-running reality T.V. show “Cops,” scheduled to start its 33rd season next week, was canceled by the Paramount Network. HBO Max pulled “Gone with the Wind” from its service, saying it would appear again alongside “a discussion of its historical context.”

In the past few days, shares unexpectedly soared in bankrupt companies like Hertz and J.C. Penney and embattled ones like the fracking pioneer Chesapeake Energy. Then, just as suddenly, they crashed.

Chesapeake has had a wild ride this week (and it’s only Wednesday). The energy group’s stock nearly tripled on Monday, triggering 22 trading halts due to volatility. Yesterday the pattern went into reverse, with the stock tumbling 66 percent by market close, as investors digested a report that the company might file for bankruptcy.

What happened? The most common theory is that retail traders were trying to profit from very short-term stock movements — more akin to than investing. None of the companies’ equity holders are likely to recover much value after financial restructurings: Chesapeake’s bonds, whose owners would have priority in bankruptcy proceedings, have traded at 10 cents on the dollar.

Last week, we highlighted a tweak that Raytheon made to executives’ stock rewards, which The Times found would boost payouts by millions. A new analysis by The Financial Times found that many companies have given executives much larger stock and options packages during the pandemic — more than making up for cuts in top managers’ salaries.

About 50 companies gave their C.E.O.s 50 percent more options than last year, the FT found. Many of the awards were made when markets plunged in March; that is consistent with the timing of pay decisions in previous years, although some grants seemed arranged to price very close to the market bottom.

• The boost may be the result of companies offering packages with a similar dollar value at a point when the shares were much cheaper than before.

That “positions executives to reap outsized gains if stocks continue to recover,” the FT’s Fan Fei and Andrew Edgecliffe-Johnson write.

Shares in Vroom, an online used-car marketplace, more than doubled in their stock exchange debut yesterday. Other I.P.O.s have also overperformed during the pandemic, benefiting from high investor demand. In Wall Street parlance, it’s a “risk-on” time.

• Of 17 I.P.O.s held since late April, just two fell in their first day of trading, according to Renaissance Capital.

It’s in line with the overall climb in stock markets, as investors feel increasingly confident that the global economy is recovering — despite expert warnings of ongoing pain.

There are more I.P.O.s to come, advisers say, as companies feel encouraged by these strong receptions. Even Airbnb, which announced sweeping layoffs last month, has reportedly revived internal conversations about going public.

• Tiffany revamped some debt obligations to help meet requirements of its $16.2 billion sale to LVMH. (Reuters)

• The investment firm Cerberus demanded seats on the board of Germany’s Commerzbank. (Bloomberg)

• What to expect from the Fed’s meeting today: probably no move on interest rates, but some comment on the U.S. economy reopening. (NYT)

• Wall Street isn’t happy with a bill in Congress that could delist Chinese companies from U.S. exchanges. (CNBC)

• The data consultancy Palantir reportedly adjusted employees’ stock options to let them buy shares cheaper, after failing to live up to a $20 billion valuation. (Business Insider)

• A deep dive into the Vatican’s controversial investment in a London office building. (FT)

• How the pandemic has battered the cocaine trade. (WaPo)