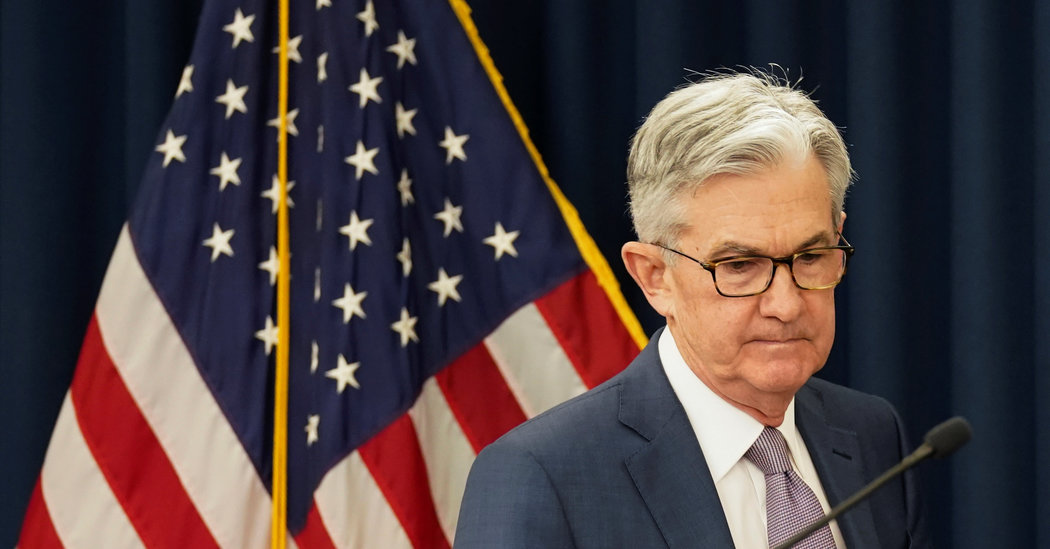 Good morning. Jack Welch’s funeral will take place at 9 a.m. tomorrow at St. Patrick’s Cathedral in New York. It is likely to be attended by a Who’s Who of business. His wife, Suzy, says: “As Jack would have it, all are welcome.” (Was this email forwarded to you? Sign up here.)

What the Fed can’t do

The Fed surprised the markets with a chunky half-percentage-point cut yesterday morning, two weeks before its regularly scheduled policy meeting.

The stock market rally lasted about 15 minutes. Bullishness about monetary stimulus quickly gave way to fears that the drastic action implied that the Fed thinks the coronavirus will hit the economy hard, tanking stocks.

Bonds set new records, with the 10-year Treasury yield dropping below 1 percent for the first time. It’s not a good sign for investors’ worries about the state of the economy.

“The fundamentals of the U.S. economy remain strong,” Jay Powell, the Fed chairman, said as he announced the rate cut. For some, it brought to mind this passage from the economist John Kenneth Galbraith’s book “The Great Crash, 1929”:

Always when markets are in trouble, the phrases are the same. “The economic situation is fundamentally sound” or simply “The fundamentals are good.” All who hear these words should know that something is wrong.

What could go wrong? Market watchers aren’t predicting anything as bad as the Great Depression, but there are scenarios in which the supply shock of the coronavirus could turn into a full-blown credit crunch or dent demand enough to tip economies into recession.

The Fed is doing what it can, but “a rate cut will not reduce the rate of infection — it won’t fix a broken supply chain,” Mr. Powell warned. Here are other things the central bank can’t do:

Joe Biden racked up a number of victories on Super Tuesday, re-emerging as a front-runner for the Democratic presidential primary. But Bernie Sanders won California, effectively narrowing the race to the two men.

Mr. Biden picked up nine states, including Texas, while Mr. Sanders won four, including the night’s biggest prize, California. Calculations for how many delegates each candidate won won’t be known for some time — California alone will take weeks to sort out — but the two men have amassed formidable numbers so far.

A bad night for billionaire Mike Bloomberg may force him to drop out, perhaps as soon as today, Politico’s Sally Godenberg and Christopher Cadelago report. A spokeswoman for his campaign said no plans had been made to do so.

Senator Elizabeth Warren remains in the race, despite several third-place finishes, including in her home state, Massachusetts. Democratic centrists note that she is splitting the progressive vote with Mr. Sanders, while moderates have increasingly coalesced around Mr. Biden.

U.S. stock futures turned up as the voting results came in.

The Japanese tech conglomerate’s chief, Masa Son, told investors in New York yesterday that his company was still ready to invest, despite taking it on the chin from troubles at investments like WeWork.

SoftBank will move ahead with a second Vision Fund, Mr. Son told attendees of the meeting, Bloomberg reports, noting that the scaled-down fund has yet to nail down big capital commitments from outside investors.

Some Vision Fund math: Mr. Son expects about 15 percent of Vision Fund investments to fail, while another 15 percent would make up most of the fund’s profits, according to Bloomberg.

The meeting was meant to help SoftBank demonstrate its resilience. (It was arranged by Goldman Sachs on behalf of big trading clients.) The company has been in talks with Elliott Management, the activist hedge fund that has taken a $2 billion stake and demanded a big stock buyback and a more independent board.

Robinhood shoots itself in the foot

The $7.6 billion stock-trading app shot to popularity on the back of its tech bona fides and commission-free trading. But it broke down this week amid the coronavirus-induced market frenzy, tarnishing its once-sterling reputation, the NYT’s Nathaniel Popper and Tara Siegel Bernard write.

Robinhood suffered perhaps the worst outages of any major stock-trading platform, its app going down for long stretches on Monday, when there was the biggest daily rally in the S&P 500 since 2018, and Tuesday, when stocks whipsawed after the Fed’s emergency rate cut. By contrast, Vanguard and TD Ameritrade said they had experienced only sporadic outages. Robinhood blamed an “unprecedented load” for the outage.

Irate customers said they planned to withdraw their money — as soon as they were able to. Reddit and other message boards lit up with complaints and discussions about where to transfer accounts. With many more alternatives for fee-free trading available, recovering from the outage will be a major marketing challenge for Robinhood.

A breakthrough year for women in the boardroom

Our friends at the In Her Words newsletter wrote about how regulation and public pressure have pushed public companies to diversify their boards. Moves by financial firms have promoted more gender diversity at private companies, too.

Only one of the 25 largest I.P.O.s in the U.S. last year had an all-male board. In total, women held 22 percent of the board seats at these newly listed companies, more than double the 10 percent average over the previous five years. (Greenlane, the cannabis accessories company, was last year’s all-male exception — the odd man out, if you will.)

There is still a long way to go, and the financial industry itself could do a lot better. A new Morningstar report found that only 14 percent of fund managers in 2019 were women, the same as in 2000. The percentage in the U.S. actually fell over that period, to 11 percent last year, compared with 14 percent in 2000.

• The investment firm Exor agreed to sell its PartnerRe reinsurance company to Covea of France for $9 billion. (Reuters)

• Brookfield Property Partners is reportedly weighing a sale of the car dealership landlord Capital Automotive for about $5 billion, including debt. (Bloomberg)

• The Supreme Court appears poised to weaken the Consumer Financial Protection Bureau, based on oral arguments in a case yesterday. (CNBC)

• The Trump campaign sued The Washington Post on a libel claim over two opinion articles that tied President Trump’s 2016 campaign to Russia. (NYT)

• Heavyweights in quantum computing include Google, IBM and … Honeywell? (Protocol)

• A crucial part of the U.S. Space Force’s mission will be advancing the America’s 5G wireless capabilities. (CNBC)

• What happens to your emails after you die? (Happy Wednesday, everyone!) (Bloomberg)

• JPMorgan Chase has reportedly suspended at least three traders while it conducts an inquiry into potential breaches of its policy on using chat platforms. (Business Insider)

• Finra, the industry-run regulator for brokers, is obscuring data that could protect investors. (Quartz)

• From our friend Bill Cohan: “My Last Lunch With Jack Welch.” (NYT Opinion)

Some of you may have received two copies of yesterday’s newsletter because of a technical error. We hope you read them both — it was a good one.