DealBook: ‘We Are Definitely Not Out of the Woods’ 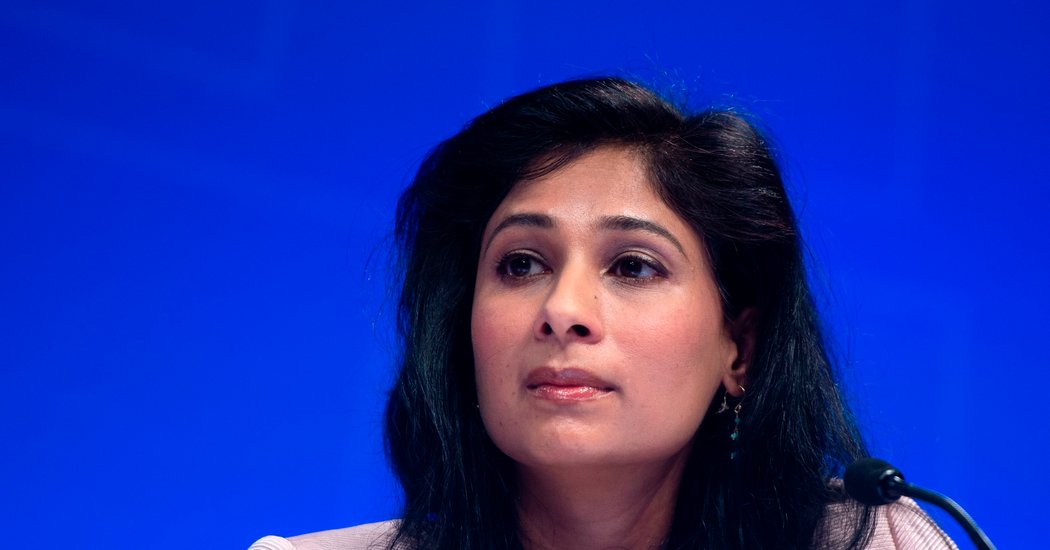 Markets turned sharply lower yesterday on data showing a surge of coronavirus infections in several parts of the U.S. and around the world, sowing doubts about the path of economic recovery as businesses reopen and social distancing guidelines are relaxed. Futures suggest a flat open to trading today.

The I.M.F. cut its forecasts and warned of “scarring” to the global economy. “We are definitely not out of the woods,” said Gita Gopinath, its chief economist. “This is a crisis like no other and will have a recovery like no other.”

Some states and companies have reimposed restrictions.

• Gov. Andrew Cuomo of New York said yesterday that anyone coming from eight states undergoing a sharp rise in cases — Alabama, Arizona, Arkansas, Florida, North Carolina, South Carolina, Texas and Utah — would have to quarantine for two weeks when entering the state, or face a fine. He also delayed the reopening of malls, gyms and movie theaters. The New York City Marathon, which would have celebrated its 50th race in November, was canceled.

• Disney delayed the reopening of its California theme parks, which had been scheduled for July 17, as new cases in the state spiked this week.

• Within weeks of reopening, Apple has closed stores in virus hot spots, including seven in Houston yesterday. Gov. Greg Abbott of Texas is scrambling to contain a rise in cases in the state, which had imposed fewer restrictions than many others.

A stumble in the recovery is appearing in data, with a weekly index of U.S. economic activity assembled by Oxford Economics showing a small deterioration after 10 weeks of improvement. The index collects high-frequency stats on consumer demand, employment, financial markets, health, mobility and production. According to this measure, the U.S. economy is operating at around 73 percent of what had been the norm as of Jan. 31.

• “Looking ahead, we stress that the foundation to this recovery is an improving health outlook,” Gregory Daco, the consultancy’s chief U.S. economist, wrote in a note to clients. “If that measure continues to deteriorate, confidence will follow suit. This will lead to reduced mobility, less employment, and eventually slower demand and production growth with significant financial market risks.”

Wirecard plans to file for bankruptcy protection. The German payments processor, which said it faced “impending insolvency and over-indebtedness,” has seen its shares plummet after it admitted to a $2.1 billion hole in its accounts, following a yearlong investigation by The Financial Times.

Bayer will pay more than $10 billion to settle legal claims over a weedkiller. The settlement over Roundup is one of the biggest in U.S. civil litigation history. Bayer acquired the product, which has been accused of causing cancer, when it bought Monsanto two years ago.

SoftBank’s chief stepped down from Alibaba’s board. Masa Son, whose early investment in the Chinese e-commerce giant became a multibillion-dollar home run, resigned as a director a month after Alibaba’s co-founder, Jack Ma, left SoftBank’s board.

Amazon’s $575 million investment in Deliveroo is closer to completion. Britain’s antitrust regulator provisionally approved the deal, saying that it would not hurt consumers — a year after halting the transaction on those concerns.

CrossFit sold itself. Greg Glassman, the brand’s co-founder — who stepped down as C.E.O. after making comments about George Floyd and facing reports of sexual harassment under his management — agreed to sell the company to the owner of a CrossFit gym in Boulder, Colo.

As protests over the police killing of George Floyd and other black people have raised the issue of systemic racism in the national consciousness, corporate America has spoken up. Now, one of the country’s biggest lobbying groups, the U.S. Chamber of Commerce, is weighing in.

The chamber published a report on opportunity gaps that hinder black Americans, outlining inequality in several key areas, including:

• Employment. The unemployment rate for black Americans has been twice that of white Americans for the past four decades, and nearly twice as many black workers are in the lowest-earning occupations as white workers.

• Entrepreneurship. Black Americans represent 12 percent of all U.S. workers but only 9 percent of business owners. And black entrepreneurs have a much tougher time obtaining financing. (“We’re over-mentored and under-capitalized,” the investor Kanyi Maqubela told Bloomberg.)

• Education. Black students enter kindergarten with math scores 21 percent lower than that of white students and are twice as likely to attend high-poverty schools.

The group is hosting an online event today to discuss solutions to the report’s findings, including guests like Kareem Abdul-Jabbar, the former N.B.A. star and current education activist; Wayne Frederick, the president of Howard University; Gayle King, the CBS host; and Randall Stephenson, AT&T’s C.E.O. It’s free to attend and begins at 1:30 p.m. Eastern (register here).

We can’t stop obsessing about this stock, and apparently neither can investors. The share price of the bankrupt — we cannot stress that often enough — car rental company doubled at one point yesterday, before closing with a 30 percent gain.

The rally was apparently spurred by an analyst’s speculation about a potential deal. Jefferies’ Hamzah Mazari suggested that auto dealers like CarMax and AutoNation might bid for some of Hertz’s fleet of rental cars.

As many have noted, Hertz shares appear to be a playground for day traders. The company itself warned, as part of its abandoned effort to sell new shares while in Chapter 11, that its stock could be rendered worthless by the bankruptcy process.

• Hertz’s share price is down 90 percent for the year, but the day-to-day moves are enough to cause whiplash.

The jobs we need

Kevin J. Delaney is the editor of a Times Opinion project on economic inequality called The America We Need. Here, he discusses the latest chapter in the series, published this week, about work and the economy. You can follow him on Twitter at @delaney.

A few weeks ago, the Dallas Mavericks owner Mark Cuban wrote in a tweet that executives needed to better reward workers, rather than just themselves, or their “brand and business could get CRUSHED.” He was concerned by the bad optics of stock market gains and hefty pay packages for the wealthy during a national crisis.

But it’s too late to hide the truth: Owners, executives and investors have increasingly enriched themselves at workers’ expense over the past four decades.

American corporate leaders once bragged about how well they treated their employees and how much they contributed to society through taxes. But the focus for many C.E.O.s now is cutting labor costs, thwarting unionization, reducing benefits and outsourcing jobs — and reaping the huge personal rewards made possible by those actions.

Our lead editorial this week recounts the history of this shift, including the little-told story of how the burning of a Bank of America branch near Santa Barbara, Calif., in 1970 added to its momentum. In a piece out today, The Times’s David Leonhardt examines recent research showing that the wage gap between black and white workers is, shockingly, as large as it was in 1950, before the end of enforced segregation across much of the South.

We all lose when American workers don’t have the opportunity to achieve their potential or support their families with dignity — things a wealthy country like the United States can easily afford. So what can be done to fix things?

As David notes, raising the pay of all working-class families would make a big difference. Robert B. Reich, the former labor secretary, proposes that businesses adopt the profit-sharing plans for employees common during the last century. The Ford Foundation’s president, Darren Walker, who began his career on Wall Street, calls on the wealthy to sacrifice things like legacy college admissions and favorable tax treatments that compound inequalities. He also suggests changing the rules for stock buybacks, which since the 1980s have prompted companies to increase their share prices at the expense of worker pay and benefits.

When it comes to how we value workers, this is only a starting point. History shows that it was once a point of pride — and not fear of bad P.R. — for corporate executives to treat their people fairly. It was good business, too.

More from the latest chapter in the series:

• The Future of Work Isn’t What People Think It Is

• Tax the Rich and Their Heirs

• Olympus plans to sell its 84-year-old camera business to a private equity firm after facing pressure from the activist investor ValueAct. (WSJ)

• The parent company of Chuck E. Cheese, the arcade-and-restaurant chain, has filed for bankruptcy protection. (Bloomberg)

• The Pentagon has compiled a list of 20 Chinese companies — including Huawei, China Telecom and China Mobile — that it says have ties to the Chinese military, a potential step toward punishments from Washington. (FT)

• President Trump should “put a bunch of cotton” into the mouth of the White House trade adviser who briefly roiled markets by saying that the China trade deal was dead, said Senator Chuck Grassley, Republican of Iowa. (Business Insider)

• California’s attorney general moved to force Uber and other gig-economy companies to classify their contractors as employees. (FT)

• A federal judge dismissed a defamation lawsuit filed against Twitter by Representative Devin Nunes, Republican of California, over a parody account that pretended to be a cow. (WaPo)

• New rules for Major League Baseball’s shortened season: social distancing in the clubhouse, and no spitting or getting in the umpire’s face. (NYT)

• R.I.P. to the Segway personal transporter, used by police officers, tourists … and few others. (NYT)