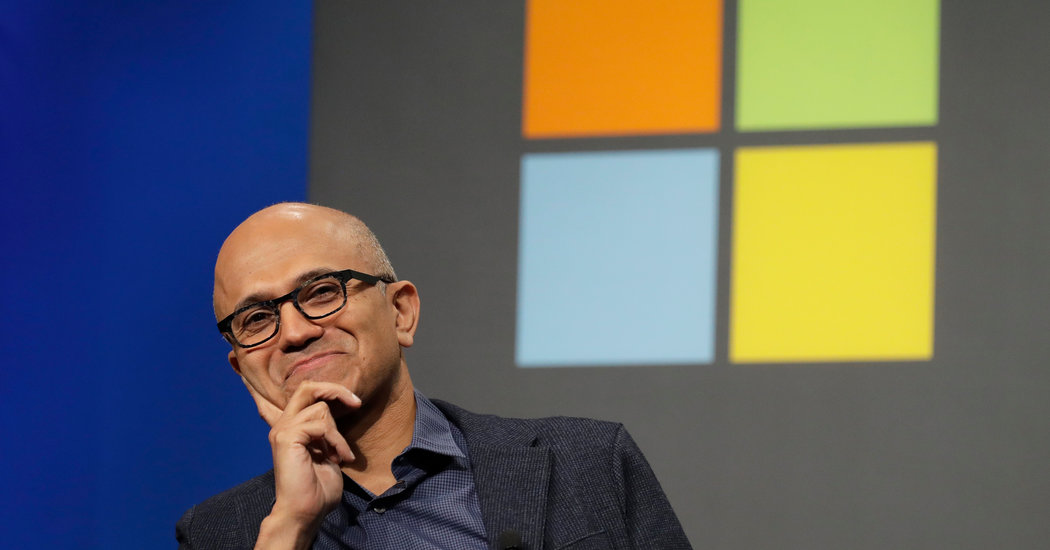 Good morning. In what has become a grim weekly ritual, the latest data is expected to show that another 2.5 million people have filed for unemployment, pushing the eight-week total over 35 million. (Was this email forwarded to you? Sign up here.)

Unlike almost every other company, Microsoft has felt a “minimal net impact” from coronavirus, according its latest financial report. The tech giant’s stock price is up 14 percent this year; it is sitting on nearly $140 billion in cash; and it looks likely to emerge from the pandemic stronger than ever. The company’s C.E.O., Satya Nadella, spoke with editors and reporters from The Times yesterday about managing through the pandemic.

Mr. Nadella sees the world going through three phases during the pandemic. The first is simply responding to the immediate impact through office closures, cost cuts and the like. Then comes recovery, which is already underway in many places, and will be more like a “dial” than a “switch.” He said, “There will be lots of movement of the dial, back and forth.”

“Be on the lookout for what is lost.”

Mr. Nadella said that raw productivity stats for many of Microsoft’s workers have gone up, but that isn’t something to “overcelebrate.” More meetings start and end on time, but “what I miss is when you walk into a physical meeting, you are talking to the person that is next to you, you’re able to connect with them for the two minutes before and after.” That’s tough to replicate virtually, as are other soft skills crucial to managing and mentoring.

Switching from offices before the pandemic to an all-remote setup would be “replacing one dogma with another dogma,” he said. “What does burnout look like? What does mental health look like? What does that connectivity and the community building look like? One of the things I feel is, hey, maybe we are burning some of the social capital we built up in this phase where we are all working remote. What’s the measure for that?”

About all that cash …

Microsoft spent $10 billion in its most recent quarter on share buybacks and dividends, up more than 30 percent from the year before. Is Mr. Nadella changing his thinking on how to spend it, through either returning it to shareholders, building up a safety buffer or spending it on acquisitions?

He answered that Microsoft will use “all of our levers” to grow. “We’re going to boldly allocate and acquire, build, innovate, partner, whatever,” he said. “And then, we are also going to make sure that we have the ability to do credit for small businesses and other organizations that need that help,” he added, saying that he has talked to several airline C.E.O.s about their troubles.

Central bankers are usually circumspect in public. But the Fed chairman warned bluntly yesterday that the economy could permanently suffer if Washington didn’t spend more to counter the economic effects of the coronavirus.

Congress has already offered $2.9 trillion, he noted at a virtual event, in what he called “the fastest and largest response for any postwar downturn.” The Fed has taken unprecedented steps as well, slashing interest rates, buying a huge array of bonds and directly supporting state governments.

That may not be enough. “There is a sense, a growing sense I think, that the recovery will come more slowly than we would like,” he said. “Additional fiscal support could be costly, but worth it if it helps avoid long-term economic damage and leaves us with a stronger recovery.”

Markets promptly swooned as investors worried about Mr. Powell’s predictions. One particularly arresting stat he cited: Nearly 40 percent of people who were working in February and were members of households making less than $40,000 a year had lost their jobs in March.

For the 12 biggest investment banks, the first quarter was their best in years, generating the highest collective revenue for the period since 2015, according to the research firm Coalition. The firm compiled the numbers for Bank of America, Citigroup, Goldman Sachs, JPMorgan, Morgan Stanley, Barclays, BNP Paribas, Credit Suisse, Deutsche Bank, HSBC, Société Générale and UBS.

Revenue jumped 12 percent, to $44 billion. Trading activity, boosted by volatile markets, grew more than enough to offset declines in advisory fees for M.&A. and I.P.O.s. The results for fixed income, currencies and commodities (known as F.I.C.C.) were particularly strong.

But front-office head count fell by 5 percent, to 49,000, the lowest in six years. Several banks had planned to cut thousands more jobs this year, but held back to deal with the pandemic fallout. That pause may be over: This week, Deutsche Bank announced this week it would restart its deep restructuring.

😷 Has the coronavirus surged in states that rushed to reopen for business, like Florida and Georgia? Axios says not yet, citing the seven-day average of new cases. The Washington Post, which looked at more measures, says it’s complicated.

💰 Three Senate Democrats asked the Trump administration to tighten oversight of banks doling out small-business rescue loans, after some borrowers complained that they received less than requested. Meanwhile, publicly listed companies continue to take loans from the program, despite threats from the Treasury Department.

📉 In a survey by PwC in March, 69 percent of American C.F.O.s said that it would take their companies less than a month to get back to “business as usual.” In a follow-up survey last week, just 10 percent did.

The Tesla standoff is over

The electric carmaker can start making vehicles at its main plant in Fremont, Calif., next week, local health officials said yesterday, after days of battling with Elon Musk over reopening the factory.

Tesla’s facility can resume full operations on Monday, so long as it follows certain worker safety precautions. The local police will enforce an agreement between the company and Alameda County public health officials.

• Elon Musk declared that he would reopen the factory last Friday, defying a county lockdown order. He then a) sued the county and b) opened this week anyway.

Worth noting: A county official previously told The Times that Tesla had been in talks to open on May 18 — the same day that Ford and G.M. would restart factories — before Mr. Musk began his insurrection.

Several employees said they felt the company prioritized profits over people. One told The Times’s Niraj Chokshi that Tesla instituted safety measures like temperature checks, but little else had changed.

News from one of Mr. Musk’s other fights: The head of Facebook’s A.I. efforts says the Tesla chief “has no idea what he is talking about” on artificial intelligence, which he has declared a threat to humanity.

For years, companies have increasingly highlighted “adjusted” accounting measures in their financial reports, often more prominently than the numbers required by regulators. These tend to exclude all manner of inconvenient expenses, with the most infamous being Ebitda, or earnings before interest, taxes, depreciation and amortization.

Say hello to Ebitdac. The Financial Times highlights a German industrial company, Schenck Process, that included “Ebitda adjusted for effects from Covid-19 crisis” in its latest financial statement. If not for the pandemic, Schenck said, its first-quarter profit would have been 5.4 million euros ($5.8 million) higher.

The risk to “earnings quality” goes up during crises, Ben Laidler from Tower Hudson wrote in a research note. He reckons companies will more often take the pandemic as an opportunity to report large, one-off accounting expenses — “big bath” or “kitchen sink” charges, in the lingo — that reset or obscure unrelated underlying issues. “Managers may use bad news as cover to unwind prior aggressive accounting or gain future flexibility,” he wrote.

• What to watch: the ratio between operating cash flow and net income. During downturns, the latter falls faster than the former, as companies report big noncash charges, justified or not.

• Uber sold $900 million worth of debt to finance acquisitions. (NYT)

• J.C. Penney could file for Chapter 11 protection as soon as tomorrow, and is negotiating $450 million in bankruptcy financing. (NYT)

• F.B.I. agents reportedly seized a cellphone belonging to Senator Richard Burr, Republican of North Carolina, as part of an investigation into his stock trades after a virus briefing. (L.A. Times)

• Democratic and Republican lawmakers are increasingly at odds over whether to pause M.&A. during the pandemic. The Justice Department’s antitrust chief said such a move would be “misguided.” (Politico, CNBC)

• TikTok has broken an agreement with the F.T.C. to protect children’s privacy, consumer advocates said. (NYT)

• The founder of Webvan, a food delivery service that went bust in the dot-com era, is trying again. (Forbes)

• Bill Gates is trying to get fellow billionaires to donate more to fight the coronavirus. (Recode)