DealBook: Where Do We Go From Here? 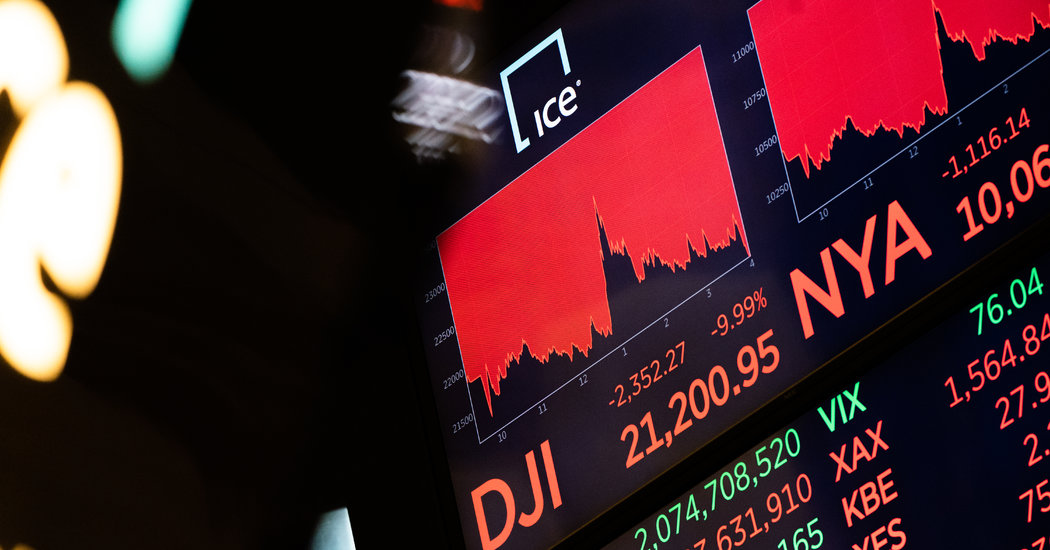 Good morning. It’s Friday the 13th. Stay safe out there. (Was this email forwarded to you? Sign up here.)

Trillions of dollars in market value were erased on Thursday — $4.7 trillion, to be exact, per S&P Dow Jones Indices — after several global exchanges suffered their steepest fall since the Black Monday crash of 1987.

It has been worse. The roughly 10 percent drop in U.S. indexes yesterday was only half as bad as the daily drop on Oct. 19, 1987. Feel better? Didn’t think so.

The S&P 500 is back to where it was in January 2019. Other markets have retrenched even further. Here’s the last time we saw markets trade at the depths of Thursday’s close:

Much of the gains made since President Trump took office have evaporated. His approval rating tends to move in line with the markets, an association that he often encourages. In mid-February, the S&P 500 was up nearly 60 percent since the 2016 election and 50 percent higher than the day of Mr. Trump’s inauguration. Now, the index is 16 percent higher than Election Day and 9 percent above inauguration levels. (His approval rating is around 42 percent.)

• The S&P 500 is down 23 percent since Mr. Trump tweeted in late February, “Stock Market starting to look very good to me!”

Things are looking up today. Asian markets initially followed Wall Street’s plunge, but pared their losses as central banks stepped in to provide emergency liquidity (more on that below). European stocks opened higher, and U.S. futures suggested a rise on Wall Street as well — but not nearly enough to recoup yesterday’s losses.

Some humor (at crypto’s expense), from Paul Donovan of UBS: “The S&P fell 27% from its highs — it is up 38% converted into bitcoin. People should not convert into bitcoin.”

The Fed announced $1.5 trillion in short-term loans for banks during yesterday’s market meltdown, hoping to settle nerves about potential stresses in credit markets and other crucial bits of financial plumbing.

“The Fed just brought an aircraft carrier to a knife fight,” Gennadiy Goldberg of TD Securities told Bloomberg. Ian Shepherdson of Pantheon Macroeconomics wrote in a research note: “This is a full-blown crisis response operation, intended to make it abundantly clear that the Fed will not allow liquidity to dry up.” Analysts at Goldman Sachs now expect the Fed to cut its benchmark rate a full percentage point at its meeting next week.

“Now it’s up to Congress to fire the fiscal bazooka,” Mr. Shepherdson added. (What is it about analysts and military metaphors?)

• Congress is close to a deal offering enhanced unemployment benefits, free virus testing, aid for food assistance programs and federal funds for Medicaid, the NYT reports. A vote on the package is expected today.

• Christine Lagarde, the president of the E.C.B., bemoaned “the complacency and slow-motion process” of governments in the eurozone, hoping to encourage fiscal stimulus.

• “Investors may be starting to contemplate a world in which financial morphine no longer functions,” wrote Gillian Tett of the FT. In other words: Central banks can keep acting, but now it’s up to governments to step in.

The show won’t go on

Big meetings and live entertainment are increasingly being canceled or going online, as states, cities and companies clamp down on big gatherings.

New York indefinitely banned most gatherings of more than 500 people, a huge step that effectively meant the closure of Broadway theaters, Madison Square Garden and more. Cultural institutions like the Metropolitan Museum of Art independently decided to close.

Airlines are buckling under the strain, especially after President Trump’s ban on most visitors from Europe. The discount airline Norwegian said it would furlough half its staff, and most major American airlines capped fares and suspended change fees for many European itineraries.

Disney said that it would close all its theme parks starting this weekend for the first time since the Sept. 11 attacks. (The company said employees would continue to be paid.) Princess Cruises, which suffered coronavirus outbreaks on two of its ships, suspended operations for 60 days. And many of the top late-night talks shows will go dark for at least two weeks.

The sports world ramped up its responses. The N.C.A.A. canceled the men’s and women’s March Madness tournaments, Major League Baseball delayed the start of the 2020 season, the PGA golf tour shut down, and Formula One canceled its opening race. Pressure is mounting on pro soccer leagues to suspend matches after more teams entered quarantine.

Virtual gatherings are on the rise, including online-only annual shareholder meetings and digital investor pitches for stock and debt offerings. (One exception: Berkshire Hathaway’s annual meeting in Omaha, which packs 16,000 people into the CenturyLink Arena, is still scheduled for May 2.)

• Some activist investors criticize virtual-only shareholder meetings, saying they allow management teams to cherry pick softball questions and fend off troublesome attendees with the click of a mouse.

• New York City’s pension funds were among these critics in the past. But in a statement to DealBook, the city’s comptroller, Scott Stringer, said that the funds he oversees “will not take action against boards holding virtual-only annual meetings due to the coronavirus that disclose their rationale and affirm their commitment to holding in-person meetings in the future.”

• Goldman Sachs is splitting many employees into “blue” and “white” teams who will alternate weeks at the office. (Business Insider)

• Health experts worry that the roles women hold in society, such as nurses or caregivers, put them at greater risk of infection. (NYT)

• The frenzy for new mortgages and refinancing is so high that some lenders are ignoring calls and raising rates to discourage new customers. (Bloomberg)

SoftBank bends to Elliott, a little

The Japanese tech conglomerate announced this morning that it planned to buy back up to $4.8 billion of its stock. That’s likely to bring some cheer to Elliott Management, the activist investor pushing for change at the company — but only as a first step.

Elliott has called for a buyback of as much as $20 billion, part of an effort to help raise the Japanese company’s market value. The hedge fund has also called for more independent directors on the SoftBank board and more transparency around the Vision Fund tech investment vehicle. (A representative for Elliott declined to comment.)

The move didn’t do much to help SoftBank’s stock today, however. The company’s share price was down 5 percent after the announcement, as the broader Japanese market fell.

• Magic Leap, the maker of augmented reality goggles, is reportedly weighing a sale or fund-raising round, amid interest from Facebook and medical imaging companies. (Bloomberg)

• The coronavirus has turned the 2020 presidential race into a real-time test of leadership. (NYT)

• The Pentagon said it would reconsider awarding a $10 billion cloud computing contract to Microsoft. Amazon said it had lost the deal because of interference by President Trump. (NYT)

• Oracle said it would buy back $15 billion of its own shares. (WSJ)

• David Rubenstein, the co-founder of the Carlyle Group, talks about growing up poor, becoming very rich, and giving it away to philanthropy. (NYT)

• How to run a start-up during a downturn, based on lessons from 2008 (@avichal)

• Let Gloria Gaynor show you how to survive … by washing your hands. (TikTok)