DealBook: You Have to Pay to Give Oil Away 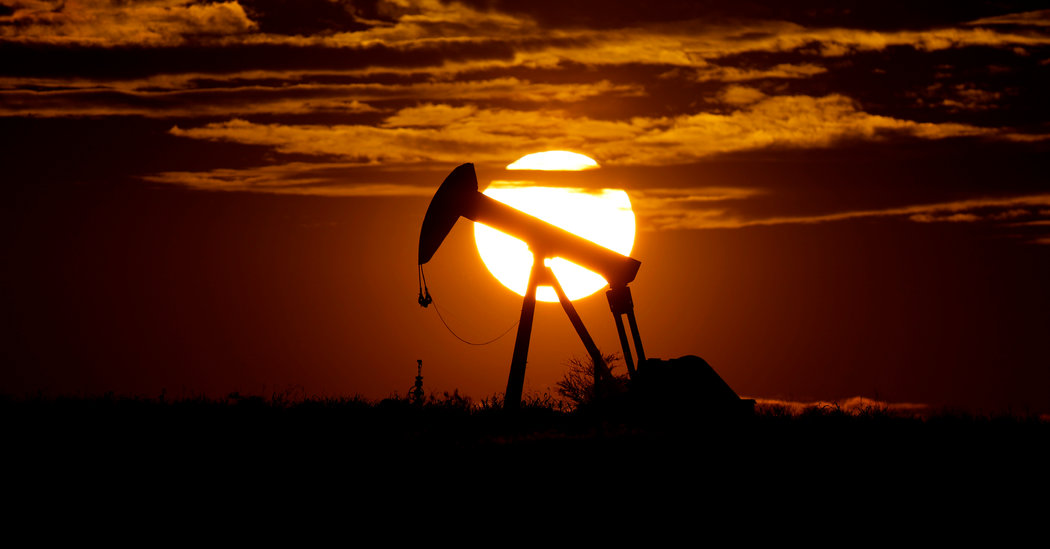 Good morning. Our next DealBook Debrief call is about the fallout for the retail industry, which has been hit particularly hard by the pandemic. We’ll be joined by Vanessa Friedman, The Times’s fashion director and chief fashion critic, to discuss how the fashion and luxury industries are coping, and the possible lasting effects. We hope you’ll join us on Thursday, April 23, at 11 a.m. Eastern — R.S.V.P. here. (Was this email forwarded to you? Sign up here.)

“Crude costs money again” is a strange headline for strange times. The price of a barrel of oil for delivery in May dropped below zero yesterday: West Texas Intermediate crude, the U.S. benchmark, closed at around -$38. It bounced back above zero, briefly, in early trading today, before falling back into negative territory. Market watchers are trying to make sense of it all.

Technical factors explain some of the decline. The soon-to-expire May contract went negative on thin volumes, while the more heavily traded June contract has remained above zero. In essence, traders don’t want to be stuck taking delivery of any oil now — storage is nearly full and demand is nonexistent — but they think that production cuts and a gradual reopening of the economy will make oil worth something in the future.

The ugly economics of the industry are also to blame. The production cuts that major oil powers agreed on this month aren’t enough to offset the steep drop in demand with much of the global economy in lockdown — so much so that Saudi Arabia and other OPEC members may start cutting a few weeks ahead of schedule, The Wall Street Journal reports.

• The battered U.S. energy industry is now worth around $700 billion in total market capitalization, roughly half the market value of Microsoft, according to the Bespoke Investment Group.

Could it happen again? Analysts at ING think so: “It is likely that storage this time next month will be even more of an issue, given the surplus environment, and so in the absence of a meaningful demand recovery, negative prices could return for June.”

The federal government’s small-business rescue fund, the Payroll Protection Program, is out of money. When it was up and running, getting a loan from a designated first-come-first-served program was a matter of luck and connections.

A customer’s bank mattered a great deal. Some lenders took days to set up their systems to gain access to the fund. Banks often gave priority to existing customers and, data shows, to bigger ones, including over 80 publicly traded companies.

• That has led businesses to sue banks like JPMorgan Chase and Bank of America, accusing them of favoring bigger customers.

Much of the outrage is directed at big restaurant and hotel chains, which were allowed to request funds, depriving true mom-and-pop businesses of loan money. And it doesn’t help that a majority of successful applicants haven’t received their money, according to a new survey.

Congress is poised to replenish the fund with $300 billion, and could have a bill to vote on as soon as this afternoon. But the banking industry says this won’t be enough: Lenders expect the reopened program to burn through $50 billion per day.

The first batch of states have laid out their plans to lift lockdowns, and all eyes are on them to see if they’re moving too early.

South Carolina will let some retailers open today, Georgia will permit gyms and hair salons to do so on Friday, and Tennessee won’t renew a lockdown order set to expire on April 30. All three states said they believed that infections had leveled off enough to let them reopen their economies.

They’re doing so despite the debate over coronavirus testing. Other states are arguing that they can’t reopen because there isn’t enough screening for the virus. An official with the W.H.O. warned this morning that the lifting of lockdowns must be gradual to avoid a second wave of infections.

• Denmark, which has opened some schools and businesses, has pledged to test everyone with symptoms.

The Deal Professor: The big get bigger

Steven Davidoff Solomon, a.k.a. “The Deal Professor,” is the faculty director at the Berkeley Center for Law, Business and the Economy

If past crises are any guide, the big technology companies are about to sidestep antitrust laws and get even bigger.

Consider last week’s decision by British regulators to allow Amazon’s investment in the London-based food delivery start-up Deliveroo. Amazon said last May that it was joining a $575 million fund-raising round, valuing Deliveroo at perhaps as much as $4 billion. Britain’s Competition and Markets Authority halted the deal because it thought it might be bad for competition.

That was before the pandemic.

Deliveroo argued that, without Amazon’s money, it would have to shut down. The British antitrust authority backed down, saying that if Deliveroo went bust, it “could mean that some customers are cut off from online food delivery altogether, with others facing higher prices or a reduction in service quality.”

Expect this to be repeated elsewhere. In the U.S., big companies will take advantage of the so-called failing firm exemption to antitrust law. This doctrine, which dates from a 1930 Supreme Court case, allows otherwise anticompetitive deals to succeed when the target would probably fail without the deal and there is no other viable investment. American Airlines used it when buying TWA.

Consolidation is natural during troubled times. Recall how the biggest U.S. banks gobbled up failing competitors during the 2008 financial crisis.

This time around, it’s deal teams at tech companies who are hatching M.&A. plans as the economic downturn takes its toll. They’ll be aided by outdated antitrust laws that assess whether an acquisition “lessens competition” in deciding whether it should be blocked. That test fails to measure bigness as a rule, allowing Facebook to acquire Instagram or Amazon to buy Whole Foods because antitrust regulators ignore the network effects.

And with Washington consumed with saving the economy, don’t expect the pre-pandemic debates about breaking up tech companies or updating antitrust laws to get very far.

Richard Branson says he’s not as rich as he appears

In pleading for help for his Virgin Atlantic airline, Mr. Branson argued that his wealth wasn’t as huge as people think — a reminder that billionaires may have wealth, but not necessarily cash.

Mr. Branson offered to borrow against his private island in the British Virgin Islands to help raise cash for Virgin Atlantic, he wrote in a blog post yesterday pleading for financial support from the British government.

• Another Virgin Group holding, Virgin Australia, filed for administration this morning after being denied a bailout.

He also argued that he couldn’t tap his personal fortune — estimated earlier this year at about $4.4 billion — because his net worth was largely tied up in holdings of the Virgin Group, rather than sitting in a bank account. It’s a reminder that the riches of many billionaires are tied to stock and investments.

• Take a look at the movements in the Bloomberg Billionaires Index, which is updated each day. The net worth of moguls whose wealth is tied up in sectors that have been hit hard by the coronavirus — like Bernard Arnault in luxury goods and Sheldon Adelson in entertainment — has dropped sharply this year, while that of Amazon’s Jeff Bezos and Walmart’s Walton clan have surged.

• No deal worth more than $1 billion was announced last week, for the first time in 15 years. (Reuters)

• President Trump said that he planned to temporarily suspend immigration to the U.S., calling it an effort to protect American jobs. (NYT)

• Many boards are cutting executives’ salary but increasing their stock awards. (WSJ)

• Ikea is stocking up on baby-related products in anticipation of increased demand eight months from now. (Reuters)