Decade of Job Growth Comes to an End, Undone by a Pandemic 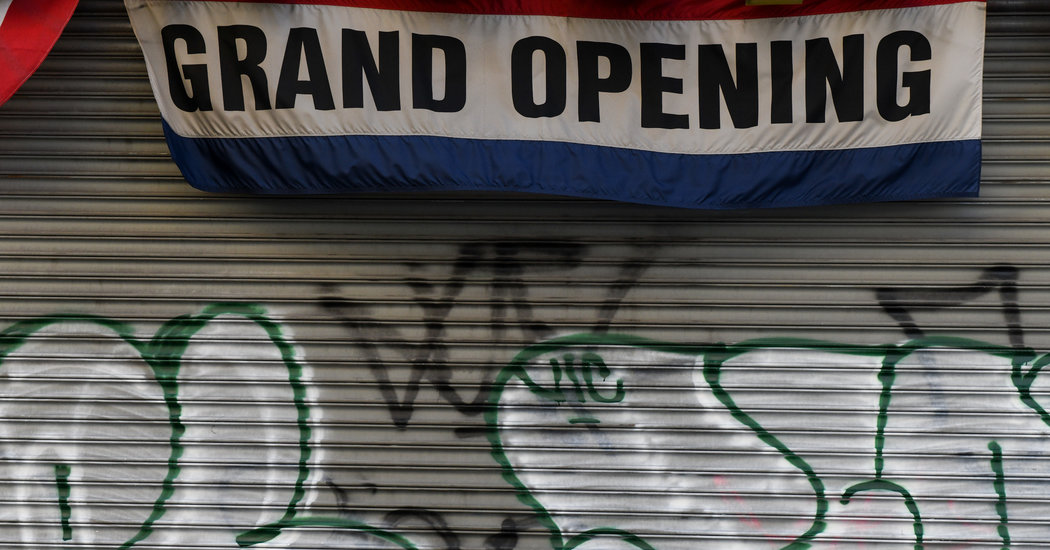 The longest stretch of job creation in American history came to a halt last month, the Labor Department reported Friday, another reflection of the coronavirus pandemic that has brought the economy to a virtual standstill.

Compared with the astounding numbers of people recently applying for unemployment benefits — nearly 10 million in the previous two weeks — the figure announced Friday was less striking: a loss of 701,000 jobs. But the data was mostly collected in the first half of the month, before stay-at-home orders began to cover much of the nation. With that, what had been a drip-drip-drip of job losses turned into a deluge.

“This is nothing compared to what we’re going to see,” said Stephanie Pomboy, president of MacroMavens, an independent research firm. Indeed, the March unemployment rate of 4.4 percent may be replaced by double digits as soon as the next report.

The decline in employment last month represents the biggest monthly drop since the depths of the Great Recession in 2008-9. It was paced by a net loss of 459,000 jobs in the leisure and hospitality sector.

It was a stunningly abrupt end to a landmark stretch of job creation — 113 months in a row, more than twice the previous record. The gains began in late 2010 and totaled 22.2 million in an expansion that was steady, if not always spectacular.

The near-decade of resurgent hiring more than recouped the 8.7 million jobs wiped out in the recession that came just before.

For corporations, it was a golden age. With interest rates low, many companies binged on debt even as they used excess cash to buy back stock. For workers, the results were mixed, with only modest increases in wages, especially for those in lower-paid jobs.

In the last few years, monthly hiring picked up, pushing the unemployment rate to a half-century low, including a 3.5 percent reading in February.

The coronavirus pandemic changed all that.

The closing of everything from restaurants and barbershops to retail stores and movie theaters eliminated broad swaths of employment in one blow, a loss only partly mitigated by vast government aid programs hurriedly enacted last month.

The employment picture darkened in late March as even sectors that had held up initially, like manufacturing, yielded to the magnitude of the crisis and factories closed.

“We’re in a delicate period in which a mild recession could turn into something more damaging,” said Carl Tannenbaum, chief economist for Northern Trust. “Government policy must continue to be aggressive if we hope to put a floor under the current economic retreat.”

During the long expansion, corporations were confident enough to run their operations with low inventories, lots of debt, little cash and supply lines that stretched across the globe. Without that cash cushion and that confidence, Ms. Pomboy said, getting back to robust employment levels will not be easy, even after the health crisis eases.

“Companies saved nothing for a rainy day,” she said. “They will have a much more conservative approach to running their businesses in the future,” she added, a stance that will result in lower employment levels over all but more production domestically.

“What is so startling is how quickly things are deteriorating,” he said. “When people discussed what would cause the next recession, a global pandemic wasn’t high on the list. We were worried about a global trade war.”

“As bad as this report is, next month will be many orders of magnitude worse,” Mr. Gapen said. “This is the initial slippage of the labor market.”

Indeed, even previous shocks to the economic system, like the Sept. 11 terrorist attacks in 2001 or Hurricane Katrina in 2005, didn’t combine the magnitude of the job losses now underway with the pace of unfolding events.

“The speed of the job losses is unlike anything we’ve ever seen,” said Gabriel Mathy, an assistant professor at American University whose specialty is economic history. “We’re in uncharted waters.”

For workers like Jane Bunting, March was a transitional month between employment and unemployment. A member of the national touring company of “Come From Away,” a Broadway musical, she watched as one venue after another canceled show dates as March wore on.

She received her last payment on Thursday and has been trying to file for unemployment benefits this week, only to see the website crash on every attempt. Ms. Bunting gave up her apartment in New York City when the show’s tour began a year and a half ago and is holed up in a rental place in upstate New York.

“I’ve been saving really aggressively, so I feel comfortable,” she said. “I haven’t had to dip into savings yet. But the longer this goes on, I definitely will.”

The show’s run has been canceled through early May, but Ms. Bunting is hoping the curtain rises soon after.

“Of course I want to go back to work as soon as possible, but if people need to stay out longer to flatten the curve, then I completely understand,” she said.

Megan-Claire Chase, who learned last week that Friday would be her final day as a marketing project manager at EmployBridge, a national staffing agency based in Atlanta, knows the anxiety of losing a job.

For Ms. Chase, 43, the loss is more unnerving now.

“I’m a cancer survivor, so all of a sudden to be without my benefits is very scary,” she said. Ms. Chase is supposed to undergo checks every six months to make sure she is still in remission. As soon as she heard the layoff news, she called to reschedule one scan for this week, but was not able to get an appointment.

“It’s very scary as a single person,” Ms. Chase said. One of 300 people at her firm who were laid off, she has to wait until after her last day of work to file for unemployment benefits.

As bad as the layoffs have been, some executives are trying their best to avoid cutting staff. Tom Gimbel, chief executive of LaSalle Network, a Chicago staffing firm, is forgoing his salary through the second quarter of the year and potentially longer, he said. Business is down 25 percent, and he anticipates that it could ultimately be off 35 percent.

He has been holding all-hands meetings with his employees at 10 a.m. daily with the online conferencing app Zoom. The market for permanent positions is very weak, he said, but the temporary-staffing business is holding up a bit better.

“There are no profits right now,” he said. “But we’ve avoided layoffs so far.”