Denied, Deferred and Ignored: 13 Applications, and No Relief 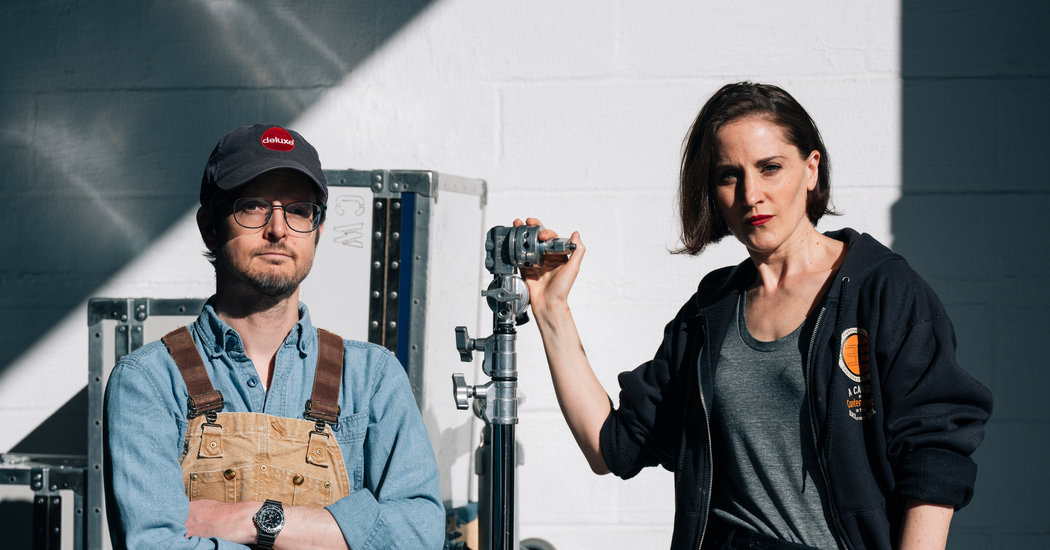 In 17 years, Graceann Dorse and her husband, Christopher Webb, have built their cinematography and special effects firm, FX WRX, into a significant creative and economic force in New York, navigating natural and financial disasters along the way.

They weathered the Great Recession in 2007-9 and Hurricane Sandy in 2012, which wiped out their first studio in the Gowanus section of Brooklyn. They made it through the city’s labyrinthine building permit process to open its state-of-the-art studio in the fall.

But now the coronavirus crisis is endangering their business, potentially wiping out hundreds of thousands of dollars in personal investment and guaranteed small-business loans, jeopardizing about $1 million in special effects equipment in the studio and harming the dozens of film professionals they work with.

“The work we do has to be done in person, with a large crew,” said Ms. Dorse, the business manager of FX WRX. “We can’t work from home, so with the stay-at-home order in effect, we cannot earn any income.”

In the last month, Ms. Dorse and Mr. Webb, a cinematographer, have applied for more than a dozen grants or low-interest loans from federal, state, city and private groups. So far, they have been denied, deferred and ignored.

Small-business owners around the country are facing economic challenges that threaten the companies they built. The biggest program to help them, the Small Business Association’s Paycheck Protection Program, burned through the $350 billion allocated by Congress in less than two weeks. On Thursday, the House approved a bill for $484 billion to serve as a second round of relief funds, with $320 billion set aside to replenish the paycheck program. But some experts say that, too, will be exhausted in days.

The paycheck program has been heavily criticized because some recipients, like restaurant chains and luxury hotel companies, were not what most people would consider small businesses. The size of the loans shows that big companies got in first and may have had an advantage.

“You can see that there’s a real skew in there,” said John Pitts, former deputy assistant director of intergovernmental affairs at the Consumer Financial Protection Bureau and now the head of policy for Plaid, a financial services firm that connects fintech apps with banks.

This fueled an outcry against companies like Ruth’s Chris Steak House, which got $20 million, and Shake Shack, which received $10 million. They were part of the 0.25 percent of the 1.66 million applicants that each received more than $5 million. Both companies announced this week that they would return the money.

“What we heard universally is, most people weren’t able to get a loan under $50,000,” Mr. Pitts said. “The banks just weren’t set up to do loans that small.”

Ms. Dorse was among the thousands of small-business owners who were left out. But she has also had a raft of other issues in trying to secure other loans and grants.

She and her husband have their wealth locked up in their 3,500-square-foot studio, but they have had no work in more than a month, while about $14,000 a month in rent, loan payments and expenses build up. They also know that whenever lockdown restrictions loosen, it will take them at least four weeks to get a paying client back in the studio.

As soon as New York State issued its stay-at-home order on March 20, Ms. Dorse began applying to government and private programs, 13 in all. She was optimistic: Theirs was not a business that could operate remotely or with any curbside modification, yet they had proved themselves as an employer and taxpayer since 2003.

She turned first to a program from New York City’s Small Business Services, which provided grants for businesses with fewer than five employees. FX WRX has hired dozens of people for projects, but the couple were the company’s only full-time employees.

That was the first red flag: They did not pay themselves a regular salary. Like many small-business owners, they took distributions from the company and reinvested capital into the business.

At times, their accountant had them declare a salary at the end of a year for tax and planning purposes, but he had advised them not to do so for the last two years, a period in which they invested hundreds of thousands of dollars in their studio.

“They denied us because we don’t use a payroll company,” she said. “We don’t pay ourselves on a biweekly basis, which blew their minds.”

The New York City programs were too small to make much of a difference for the surge of businesses suddenly in need. Representatives from the city did not immediately return calls for comment.

“It’s just so woefully underfunded for the needs of the programs,” said Howard Cure, director of municipal bond research at Evercore Wealth Management. “The city and the state are facing such huge operating deficits from the impact of the decline in sales tax and, to a lesser extent, a decline in personal income tax, that they’re in no position to expand these programs.”

Ms. Dorse said someone at the city’s Small Business Services had suggested that she apply for a $75,000 business continuity loan instead. As she was gathering supporting documents, she received an email saying the program was out of money.

At the same time, she was applying for the S.B.A.’s programs. She completed the online application for the S.B.A.’s Economic Injury Disaster program, which promised a $10,000 grant within 72 hours, on April 1. (On Thursday, more than three weeks after applying, she received $2,000. She called it “somewhat good news,” but said: “We are far from any long-term meaningful assistance.”)

She applied online for the Paycheck Protection Program on April 3, the day it went live. But Chase’s system wasn’t ready to go on Day 1, she said: “That was a significant delay.”

In the first round, the Paycheck Protection Program was a mad dash for cash. “It certainly wasn’t perfect, but it was fast,” said Everett Cook, the chief executive and one of the founders of Rho Business Banking, which helped its clients quickly create the applications for the loans. “The other side of that is, expectations were set well ahead of even that speed.”

In addition to delays at larger banks setting up their programs, Mr. Cook said, banks made loans that were easy to understand and process a priority. Applications from companies with complicated tax structures — FX WRX is an S corporation, which is not as common as a corporation or a limited liability company — or those with foreign owners required more work to process.

“Banks were trying to get as many loans done as possible, knowing there was going to be a funding shortfall,” he said. “If one application is going to take me 30 minutes and another needs three hours, it was easier to go with the 30-minute loan.”

Mr. Pitts said the S.B.A. had originated more loans in two weeks than in the previous 12 years. But in the case of FX WRX, the request may have been too small to consider, he said.

Ms. Dorse has continued to apply for grants. She tried to apply for a $5,000 Chamber of Commerce grant, but her ZIP code was not economically vulnerable enough to qualify.

This week, she went the nongovernmental route and applied for grants from Facebook’s small-business loan program, Artist Relief and Hello Alice, an online business support company.

She found an S.B.A. program that offered six months of debt relief, but the S.B.A. official she reached knew nothing about the program.

With a new round of small-business funding set to be approved, the biggest lesson from Round 1 may be to make sure your application is ready to go.

“It wouldn’t surprise me if this additional money is gone in 48 to 72 hours,” Mr. Pitts said. “When the program ran out of money, Chase said it was sitting on $26 billion worth of applications. That number has only grown since then.”