Designers Revolt Against the Shopping Cycle 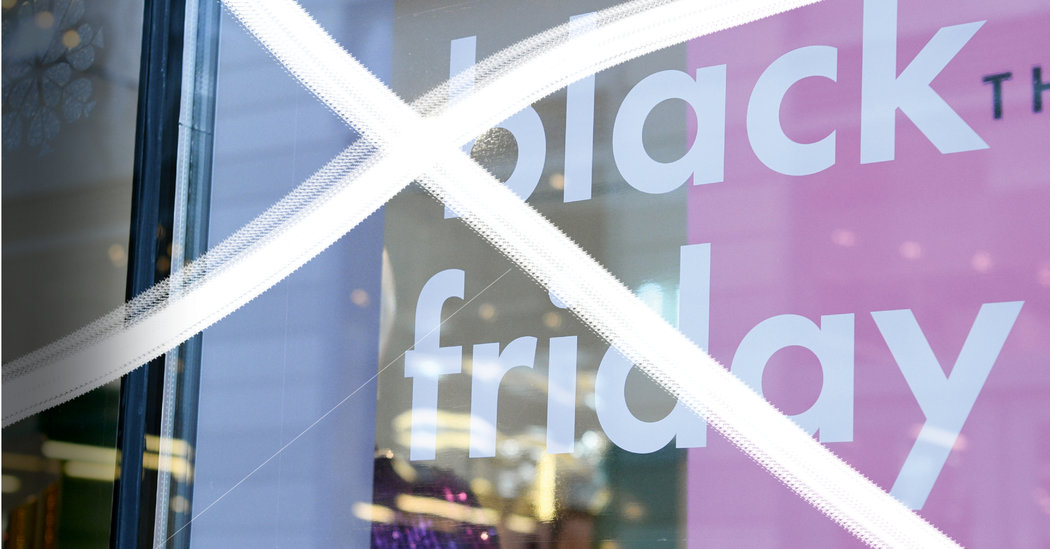 Is Black Friday as we know it over, at least when it comes to shopping for clothes?

The coronavirus pandemic may have stopped the motor of fashion, closing stores, forcing retailers into bankruptcy and putting production on ice, but in one way at least, it has spurred the industry into action: thinking about the shape of fashion’s future.

On Tuesday, a group of designers from across the international landscape, including Thom Browne, Dries Van Noten, Tory Burch, Erdem Moralioglu and Gabriela Hearst, and retailers such as Nordstrom and Bergdorf Goodman in the United States, Lane Crawford in Asia and Selfridges in Britain (as well as the e-tailer Mytheresa) went public with their first big idea. In an “Open Letter to the Fashion Industry,” they declared their intention to effectively right the seasonal shopping calendar.

What a crazy idea.

Instead of selling bathing suits in November, and wool coats in May, the goal is to sell clothes in the time of year when they are worn, and not to discount the prices on collections until they are less temporally germane to the potential wearer. Like after Christmas, when it comes to winter lines.

“When you try to explain how fashion works to people not in fashion, it’s impossible,” Mr. Van Noten said. “Nobody can understand it.” So he and some like-minded executives decided to see if the current crisis could be an opportunity to make the system make sense again.

“None of these things we are talking about are crazy or outrageous,” said Shira Sue Carmi, the chief executive of Altuzarra. “They are common sense. We know what we need to do.” It has just taken a pandemic to make them do it.

The letter was created by an unofficial Zoom fashion forum that came together in early April when Andrew Keith, the chief executive of Lane Crawford, received an email pitch from an online platform (he declined to reveal which one). The pitch suggested that the platform could help move unsold spring and summer merchandise for him, and he thought, “Why have we been resorting to discounting our way out of trouble?” He got in touch with Mr. Van Noten, and things built from there.

“We know fall will deliver late,” Mr. Van Noten said — probably in September, or actual fall, instead of arriving in stores in July, as it typically does. “And we are going to put that on sale in November? Wouldn’t it better to wait until the new year? And then to have the courage to keep the rhythm we establish now?”

This also means that the pre-fall and pre-spring collections (or resort or cruise, depending on what you call it) — those sometime extravaganzas in far-flung destinations that have become the collections that stay on shelves the longest, and that have grown accordingly — will shrink in scale and importance. That would once again make the main line, or what most people see on the runways, the locus of designer effort and expression.

There are now just over 40 signatories on the letter, and it is open online for more.

The group, which is still so unofficial it doesn’t have a name, was quick to point out that the letter is more of a statement of good intent than any sort of binding road map. Generally concrete action and policy change has to be left to each company to realize as it sees fit, in part because it is illegal in many countries for retailers and designers to jointly choose a sale date.

But the pledge is also public enough that if signatories fail to evince any efforts to change their behavior or sales patterns, they can be held to account.

Though the department store signatories are major players in the industry, most of the brands involved are smaller independent names (Dries Van Noten, which is owned by Puig, aside), and it is unclear if the proposed end can be achieved without the buy-in of the biggest names — or major consumer pressure.

For example, the letter has not been signed by any of the major brands — Dior, Givenchy, Fendi — in the LVMH stable, the largest luxury group in the world (LVMH does have a minority investment in Gabriela Hearst) or by Kering brands like Gucci, Saint Laurent and Bottega Veneta (though Kering has a minority investment in Altuzarra). Or by Prada, Armani, Ralph Lauren or Calvin Klein, for that matter. Likewise, big mass names — Zara, H&M, Macy’s — are not involved.

And history suggests that without critical mass, even the most logical ideas are often doomed to failure.

Fashion has tried to correct its course before in response to consumer confusion, most recently with the generally failed see now/buy now initiatives of brands like Burberry, Tom Ford (that lasted only one season) and Thakoon.

Yohji Yamamoto and Proenza Schouler have tried to move their shows out of the ready-to-wear cycle and to the couture time to rationalize their deliveries, only to end up reverting to the old schedule when it became clear that they were shouting into the wind.

Cooperation has never been the industry’s strong suit. Designers can’t even agree to coordinate locations for their shows so that attendees aren’t dragged from one end of a fashion week city to another practically every hour, emitting carbon all the while.

But Mr. Van Noten said he thought he was seeing signs of change in the willingness of competitors to come together over shared goals. He also said there had been conversations with other brands, including ones from LVMH and Kering, and he was hopeful that more brands may join the initiative. Though he didn’t seem to hold out much hope for LVMH because, he said, “they tend to act as a group.”

Carolina Herrera, Paco Rabanne and Proenza Schouler are expected to sign the letter.

In the meantime, the forum participants are turning their thoughts to another question: the shows. Mr. Van Noten said he was planning to skip the June men’s wear season, and probably September women’s wear as well. That will mean he has time to decide if he wants to show his spring collection in actual spring, or to stick to the calendar as it now exists, with a six-month lag time between show and sale.

“It’s an open discussion,” he said. “But that’s for a future Zoom meeting.”