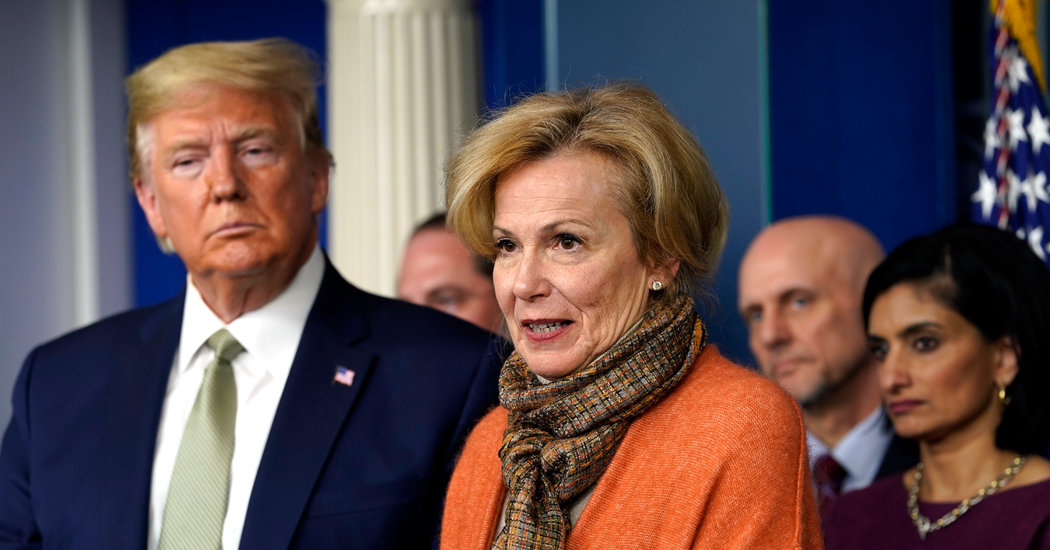 At a time when the Trump administration is facing intense criticism for its failure to make coronavirus tests available to millions of nervous Americans, remarks by a federal health official on Tuesday appeared to suggest that the World Health Organization’s diagnostic tests were wildly inaccurate.

It was not clear where Dr. Birx got those figures, but obviously such an inaccurate test would be worthless. Late on Tuesday night, Dr. Birx confirmed that although she was responding to a question about the W.H.O. test, she was referring to a study of an early diagnostic test used in China.

The paper found that, in a specific subset of those tested in China — asymptomatic contacts of known cases — the tests wrongly found them to be positive 47 percent of the time.

But there have been no suggestions that the W.H.O. test, distributed worldwide, has such significant accuracy problems. On Tuesday night, Dr. Birx said she has not looked into the W.H.O. test, “but I assume it is functional.”

Dr. Birx was asked several questions by reporters about the lack of tests during the news conference, and came and went to the microphone several times.

Early on, she was asked a question that the administration has struggled to deal with: If federal officials have shipped millions of tests, as White House officials have said several times, why have only 60,000 Americans been tested?

Dr. Birx answered that tests in the United States were now being made by many producers, which is correct. Differing diagnostic tests are now made by state laboratories, medical school laboratories and private companies like Thermo Fisher, which she mentioned as an example.

Dr. Birx said she was strongly urging commercial providers to get their tests out, but of course, they first had to prove to the Food and Drug Administration that they were of high quality.

Later, she was asked about a criticism made by Mr. Biden in Monday’s night’s debate. He said the W.H.O. had “offered tests to the United States but we didn’t buy them.”

In her answer, she did not refer to the W.H.O. tests at all, but said, “We don’t buy tests that haven’t been quality-controlled and they show us the data,” then adding that a test that with high rates of inaccuracy would be a disaster.

A spokeswoman for the W.H.O. said she did not know what Dr. Birx was referring to, but the agency had been supplying kits to member nations since January.

The accuracy of the test was validated by three laboratories before it was rolled out, the spokeswoman said, and it had consistently showed “good performance in laboratory and clinical use, and neither a significant number of false positive nor false negative results have been reported.”

In any case, Mr. Biden’s assertion that the Trump administration refused tests offered by the W.H.O. appears to be wrong. The W.H.O. does not sell tests to wealthy countries, which usually prefer to make their own.

China, Hong Kong, France, Germany, Thailand and the United States have all designed their own tests, according to the W.H.O. website. Each one looks for the presence of two or three short stretches of viral genes.

For example, the C.D.C’s test looks at three targets on the N gene, while Dr. Christian Drosten’s looks at bits of the N gene, the RdRP gene and the E gene. Each gene performs a different function in helping the virus break into cells, hijack their DNA machinery and reproduce million of copies of itself.

For countries that are unable to make the tests or buy them from other countries, the W.H.O. asks academic or government laboratories to make tests.

It then delivers them to poor and middle-income countries at low or no cost, paying for them out of emergency funds or loans from institutions like the World Bank.

The test ordered by the W.H.O. was designed in a lab run by Dr. Drosten at the medical school of Berlin’s Charity Hospital, which is considered one of the world’s top genomic laboratories.

In a Feb. 21 email, another W.H.O. spokesman said the test’s accuracy had been verified by three other laboratories before it was sent to a German diagnostics company for manufacturing. There had been no problems with the first shipment of 250,000 doses, he said.

Dr. Michael Mina, an assistant professor of epidemiology at the Harvard School of Public Health, said both the W.H.O. test and the initial C.D.C. tests were “exceptional” in their accuracy.

The problems with the C.D.C. test have been attributed to flaws in the manufacturing of reagents for kits, not in the C.D.C.’s design.

No test is accurate 100 percent of the time, but the errors are usually introduced by medical personnel who fail to take samples correctly or lab personnel who run the test incorrectly or accidentally contaminate it with stray DNA.

For example, in February an American passenger released from the cruise ship Westerdam, which went from port to port for many days before Cambodia allowed it to dock, tested positive for the virus as she passed through Malaysia, setting off a crisis.

The C.D.C. later said she did not have the virus and judged the Malaysian test to be a likely false positive.

Since Malaysia did not have its own test, it presumably used the W.H.O.’s. But Malaysia does not have a top-quality lab, and many labs make initial errors when they are rolling out a new test.