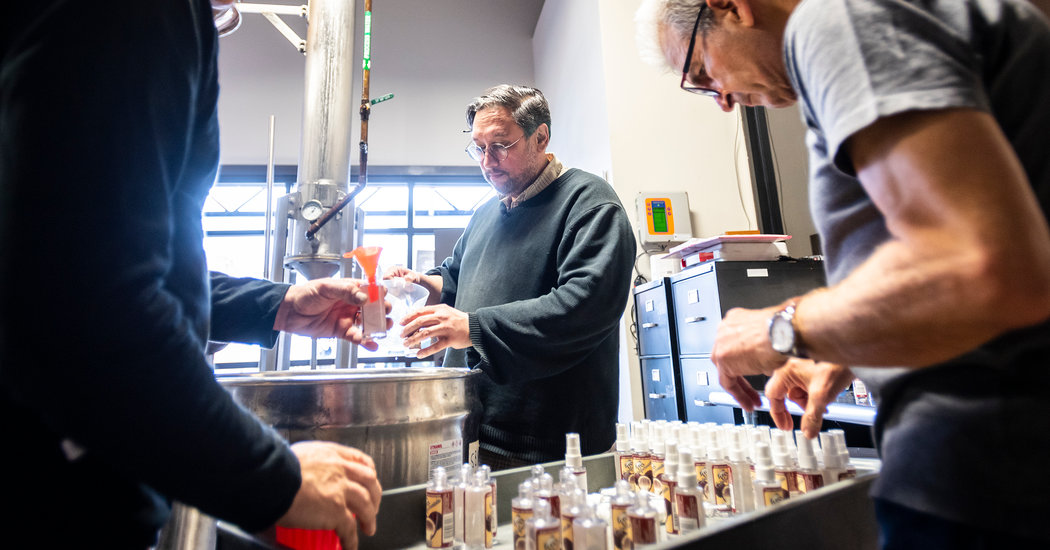 Craft distilleries, hearing the call of duty to respond to the coronavirus pandemic, are adding a new product to their lineup of gins, whiskeys and rums: hand sanitizer.

Many are reporting extraordinary demand for the product, which has been hard, if not impossible, to find on store shelves. Yet many distilleries are giving away hand sanitizer for free, despite losing sales of their traditional spirits because of the closing of restaurants, bars and their own tasting rooms.

“This is not an economic lifeline for distilleries,” said Brad Plummer, a spokesman for the American Distilling Institute and editor in chief of Distiller Magazine. “We live in these communities. We know these people. We’re watching them suffer, and we have the ability to help.”

Litchfield Distillery in Litchfield, Conn. said it had been inundated by hundreds of calls from people clamoring for a few of the roughly 2,000 bottles of hand sanitizer it produced this week using the same alcohol it typically uses to make gin, bourbon and vodka.

“Right now, we’re down to a couple hundred bottles, which will probably be gone by midmorning tomorrow,” Jack Baker, an owner of the distillery with his brothers David and Peter Baker, said on Thursday night.

He said the calls had come from health care workers, police departments, soup kitchens and homeless shelters. “And then we have people walking in with just desperation on their faces, and old people calling up, crying,” Mr. Baker said. “It’s just a mess.”

Many distillery owners said they were proud to be stepping in to fill a national need during a time of crisis and didn’t see hand sanitizer as a potential source of profit. Mr. Baker said he had been giving away the bottles he makes without charging customers.

“The community has supported us, so it’s an obligation, if you have a product that could be helpful,” he said. “It’s what you do.”

Mr. Plummer said early responses to a survey by the American Distilling Institute suggested that three-fourths of the nation’s 2,000 craft distilleries were considering making sanitizer as a way to help health care workers, law enforcement officials and the general public.

The distilleries, which had been following a recipe recommended by the World Health Organization, were having a hard time finding plastic containers to bottle the product, Mr. Plummer said. Many were asking members of the public to bring their own bottles from home.

Distilleries have also expressed concern that they may be operating in a legal gray area by producing and distributing an alcoholic product free of cost.

But the producers received some reassurance on Wednesday after the Alcohol and Tobacco Tax and Trade Bureau, which oversees the industry, said it had waived parts of a federal law to allow distilleries to “immediately commence production of hand sanitizer” without having to obtain authorization first.

“It’s amazing to me that they acted that quickly,” said Chris Weld, the owner of Berkshire Mountain Distillers in Sheffield, Mass., which on Thursday turned out its first bottles of sanitizer made from ethanol blended with vegetable glycerin and hydrogen peroxide. “It shows the importance of this.”

Mr. Weld said he had dropped off large jugs of the sanitizer at local police, fire and emergency services stations and planned to sell five-ounce bottles of it for $6 apiece at his distillery, alongside more traditional products like Ice Glen Vodka, Greylock Gin and Ragged Mountain Rum.

With the closing of restaurants and bars eating up half of his business, he said, hand sanitizer sales could “help stem the tide a little bit during these hard times.”

On Thursday, the liquor giant Bacardi said that its distillery in Cataño, P.R., where more than 80 percent of the company’s rums are produced, had partnered with a Puerto Rican manufacturer, Olein Refinery, to provide ethanol for more than 1.7 million 10-ounce bottles of hand sanitizer.

More than half a million of the bottles will be donated to to local communities, Bacardi said, adding that it had started giving away free sanitizer and disinfectant to postal workers, firefighters and police officers, as well as its own employees and contractors.

President Trump offered his support for the effort on Thursday, declaring on Twitter that “America’s Private Sector is stepping up to help us be STRONG!”

“Many of the Nation’s distillers, large and small, are producing and donating hand sanitizer to help fight #COVID19,” he wrote. “THANK YOU!”

The Centers for Disease Control and Prevention recommends washing hands with soap and water whenever possible to kill the coronavirus and prevent infection. But if soap and water are not available, the agency says, hand sanitizer can be used if it contains at least 60 percent alcohol and is rubbed vigorously for about 20 seconds.

Ryan Thompson, owner and founder of 10th Mountain Whiskey & Spirit Company in Vail, Colo., said his distillery started making hand sanitizer for the county sheriff’s office last Friday and planned to start handing it out for free to people who drive by the distillery.

Customers from as far away as New Mexico and Tennessee have called, he said, desperate to procure a bottle.

“We’ve been hit hard just like every small business in the country, but it doesn’t seem right to sell this for a profit, so we’re just giving it away,” Mr. Thompson said. “We’re just going to keep on making it as the need requires.”