Don’t Cheer Too Soon. Keep an Eye on the Core Jobless Rate. 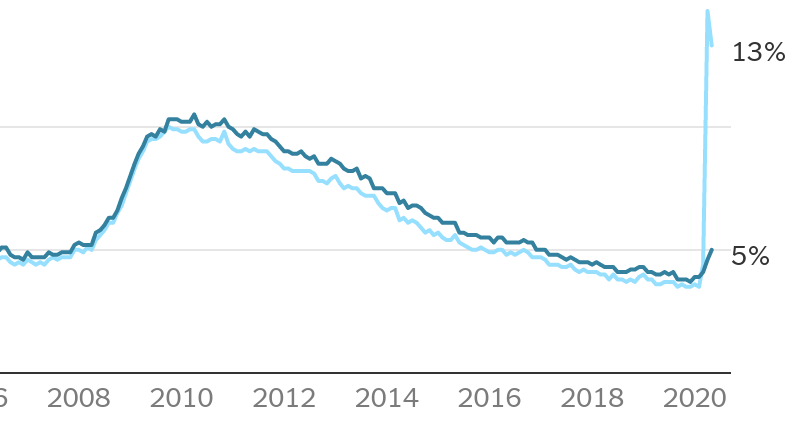 The recent jobs report for May seemed to bring good news: more jobs and lower unemployment. But the coronavirus pandemic has broken most economic charts and models, and all the numbers we regularly watch need a closer look. The decline in unemployment was actually driven by a drop in temporary layoffs. Strip those out, and what remains — let’s call it the core unemployment rate — rose in May.

The Bureau of Labor Statistics already publishes six versions of the unemployment rate. So why does the world need a new one?

Core unemployment takes out temporary unemployment, keeping all the rest of the standard unemployment definition: permanent job losers, job leavers and people returning to or entering the labor force. It also adds in the “marginally attached” — people who are available and want to work but count as out of the labor force rather than unemployed because they haven’t searched for work in the past four weeks. (For insiders, core unemployment equals U-5 minus temporary layoffs.)

This recession started with a huge but temporary shutdown of travel, restaurants and numerous other sectors. In May, 73 percent of all unemployed people said they were temporarily unemployed, which means they had a return-to-work date or they expected to return to work in six months. Before the pandemic, temporary unemployment was never more than one-quarter of total unemployment.

In these shutdown sectors, the temporary share of unemployment was especially high. More than 80 percent of unemployed workers in education and training; building cleaning and maintenance; personal care; and manufacturing were on temporary layoff, according to the detailed microdata for May released on June 10, a few days after the jobs report. But temporary layoffs accounted for only about half of unemployment among tech, scientific and social service workers.

Core unemployment is less concentrated in shutdown sectors than temporary unemployment and the headline rate suggest. In other words, the longer-term pain looks to be more widely spread than the shock of the sudden shutdown was.

As damaging and frightening as a temporary layoff is, there’s still hope your employer will stay in business and call you back to work. Initial pandemic relief efforts focused on money for people to manage a temporary loss of income and funds to keep businesses afloat until they could bring their workers back. The hope and the goal is for the temporarily unemployed to return to their old jobs, rather than have them lose their jobs and have to search for new ones when jobs have become scarcer.

In all of the six published unemployment rates, temporary and permanent job losses count the same, which may be fine in normal times. But in this pandemic, it’s essential to track whether the inevitable decline in temporary unemployment as sectors reopen is because people are returning to work or because they are losing their jobs definitively.

Temporary unemployment is hard to interpret. It reflects a prediction by the respondent or their employer about whether and when they’ll return to work. It’s useful as an upper bound to how severe a long-term crisis America could be in for. The worst outcome would be if none of the temporarily unemployed returned to their jobs, if they all became permanently separated from their current employers. This would be disastrous for millions of people and for the economy. The headline unemployment rate would not change. Only the core unemployment rate would rise — accurately reflecting the calamity of this worst-case scenario.

The core unemployment rate also sidesteps the misclassification error that recently spawned understandable confusion and baseless conspiracy theories. Since March, some respondents to the household employment survey were misclassified as employed but absent, even though they were presumably temporarily laid off. Neither employed-but-absent nor temporarily unemployed workers count as unemployed in the core rate, so misclassification between those two categories doesn’t affect that rate.